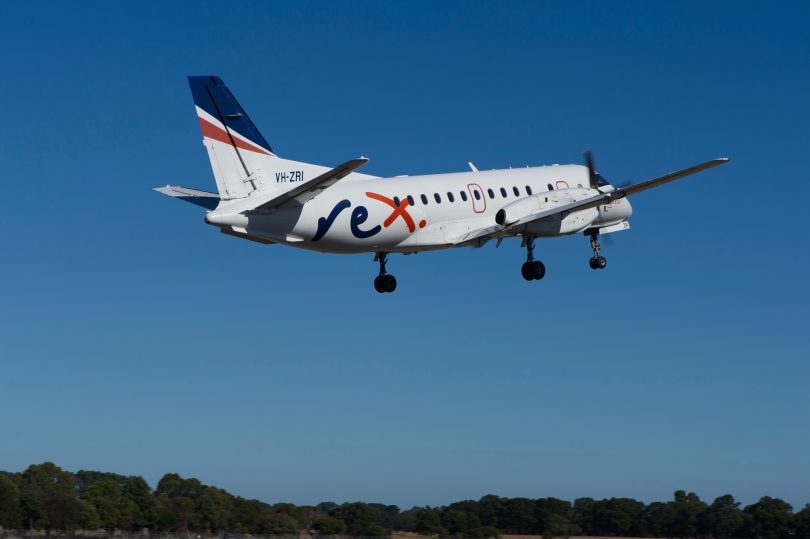 Regional Express (Rex) has grounded most of its services as the current economic situation worsens for airlines. Photo: File.

Just days after reducing its flights by 45 per cent, Regional Express (Rex) has announced it will be suspending its public air services in every state except Queensland from 6 April.

However, the airline says the changes will not affect its other services which include Ambulance Victoria fixed-wing air ambulance services, charter contracts with mining companies, freight services, and pilot training at academies in Victoria and NSW.

Rex claims it has no other options amid the recent economic downturn of the aviation industry due to the COVID-19 pandemic unless the Federal or State Governments are willing to underwrite its losses. The service is currently underwritten by the Queensland Government.

Rex deputy chairman John Sharp said an emergency board meeting was held on Sunday, 22 March, in which it was stated that the businesses had reached the precipice where it was no longer viable for it to continue operations.

“Tragically for the airline industry, this means we can expect the year-on-year reduction of passenger numbers to nosedive to around 80 per cent from the 60 per cent we are experiencing today,” said Mr Sharp.

“There is a tipping point in the airline business beyond which it will no longer be sustainable to operate reduced services.

“We believe that with only 20 per cent of our passenger numbers left, we have reached that point and the Rex Group has decided that the quasi suspension of all services at this stage presents the best option to preserve its cash.”

Last week Mr Sharp said the airline could possibly last six months on cash reserves if the economic situation did not deteriorate further.

While Rex welcomed the Federal Government’s $715 million bailout for the aviation industry – of which the airline gets $1 million a month – Mr Sharp said it is “grossly insufficient” to cover the expected loss of $10 million a month due to their grounded fleet.

“The US Government has put in place a rescue package of US$50 billion for a total airline revenue in the USA of US$240 billion – about 20 per cent of one year’s worth of revenue,” he said.

“Australia’s total airline revenue is $23 billion, indicating that an equivalent effort in Australia would require a rescue package in the order of $4.6 billion instead of the $715 million proposed.”

Mr Sharp said if another assistance package cannot be negotiated by the end of this week, regional and remote communities across Australia will likely suffer.

“Failure to achieve any traction in this regard will see regional communities lose their air services for many months ahead,” he said. “And even after this is all over, we are afraid that some of the more marginal communities will no longer have an air service.”

No state governments have tabled any concrete proposals to the airline and local councils are “a true disappointment” according to Mr Sharp, who added that only two have proposed “any reasonable assistance” for the airline.

Passengers with bookings after 6 April must wait until 27 March before being able to request that their bookings be credited for a future flight. No refunds will be offered.