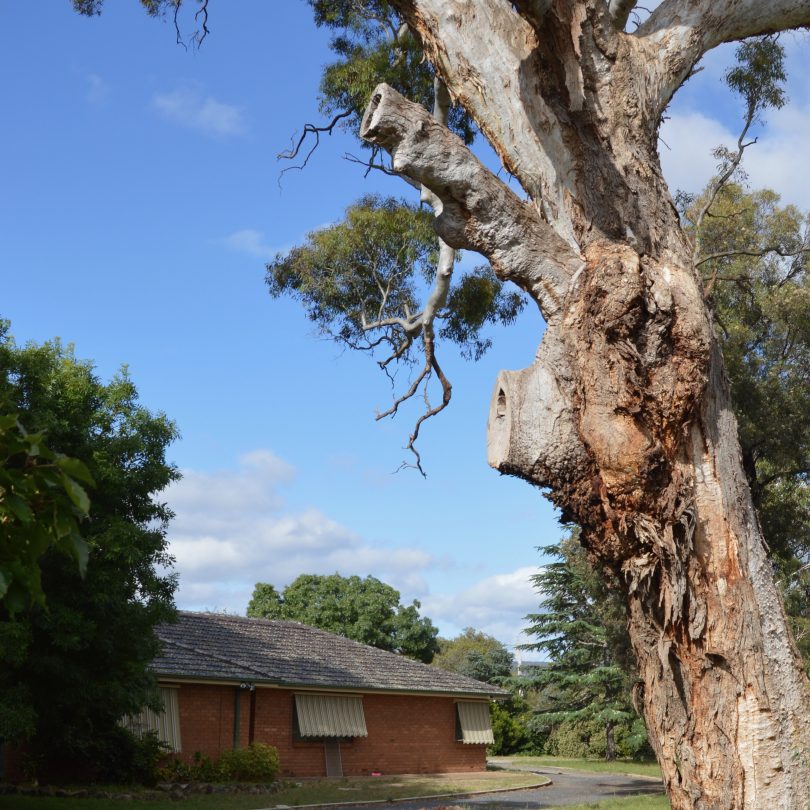 The children, grandchildren and former neighbours of a long-standing Goulburn couple are angry and upset their opposition to the redevelopment of their old family home in Rex Street is not being heard.

Proposing to demolish the four-bedroom home and retain an existing pool, the developer will build eight terrace houses at 11 Rex Street. A centuries-old, rare yellow-box tree (Eucalyptus melliodora), which has nesting hollows and Indigenous significance, stands out the front of the property.

Under NSW laws a developer can use either the local council or a registered certifier to process a development deemed to be complying. In this case, the developer has opted for Waratah Certifiers. Region Media has sought comment from the Sydney certifiers.

Ms Gordon and her daughter Natalie reject Goulburn Mulwaree Council’s position of being sidelined from the approval process, most especially if the community is not being advised correctly on aspects of the proposal.

Ms Gordon says she had raised the issue of the rare old tree with the council and will pursue the redevelopment with the Member for Goulburn, Wendy Tuckerman.

In an email to Region Media, Natalie Gordon said: “Sentimentally, the Rex Street property means a lot to me. It was my grandparents’ house. Bede and Yvonne Gordon lived in the house for most of my life. It was an oasis in my youth. It was a home of love, of large family celebrations, of knowing that you belonged somewhere in this world and of hope and knowing and loving your neighbour (the Hedges and the Croker families, in particular).

“I reflect on my time with my grandparents in their home as a time like no other,” Natalie Gordon said. “It was such a formative experience and one of those rare places where nothing in the world ever seemed impossible.

“Many people in our community have approached our family in the last few days to express their deep concern over the future of this property. While our family no longer has any financial ties to the property since it was sold after Bede died several years ago, it is a part of the spiritual fabric of the Gordon families and their relatives in this town and beyond,” Ms Gordon said.

“I’d like to understand why the Council can’t seem to make decisions about this property and want to encourage the use of outside certifiers to approve the building of eight new units on this block? I’d like to know why the Council can’t sit down and listen to the very valid concerns of the neighbours in the precinct? I’d like to know why shifting the blame seems to be an easier way out for the Council, rather than having a conversation with all the residents of that neighbourhood who have paid rates for many years?”

The huge block and many others come from an era when the street provided “rural living close to town”. On its website, Waratah Certifiers says it fast-tracks complying developments and liaises with councils on behalf of clients to ensure projects are in line with planning laws.

On 20 November, the Sydney certifier wrote to Rex Street neighbours saying the proposal was a complying development.

“The 14-day pre-approval is an opportunity for you to discuss the proposed building works with the applicant. Although should you make any representations to the applicant, it is important to note they are under no obligation to make changes to the development.

“Complying developments mean a faster approval process for the applicant, while ensuring stringent planning and environmental requirements are met.”

Jimbo Lambert - 13 minutes ago
Justo Justo some people have driven that stretch of road for 30 or 40 years at 60km/h. If they suddenly reduce the limit it i... View
Dean Soccol - 2 hours ago
Nathan Grieve in Queensland every time we get a fine we lose points. So if you are one of those that don’t care about the m... View
Nathan Grieve - 2 hours ago
Andrew Nelson not every offence comes with demerit points, so unfortunately that statement is incorrect View
Community 8

Julie Nimmo - 2 hours ago
I met Sue often. Always gracious and dignified. So very saddened when I heard that a 4x4 had killed her on the Com Av Bridge.... View
Louise Roberts - 4 hours ago
Sue was my daughters primary school teacher. My daughters favorite ever teacher. We still talk about today. Well deserved Sue... View
Opinion 90