Rider down in Florey 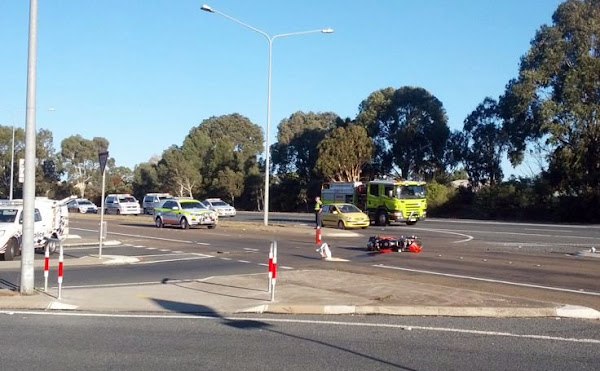 A motorcyclist has been rushed to hospital in a critical condition following a collision with a car at Florey.

The ACT Ambulance Service and ACT Fire & Rescue rushed to the scene of the accident this afternoon at the corner of Southern Cross Drive and Ratcliffe Crescent.

The woman in her forties sustained multiple injuries in the crash. Intensive care paramedics stablised her on scene before transporting her to The Canberra Hospital.

A man in the car has also been taken to hospital in a stable condition with minor injuries.

ACT Policing is seeking witnesses to a traffic incident that occurred this afternoon (Saturday, April 27) on Southern Cross Drive in Florey.

At around 4pm police received a call in regards to a collision between a motorcycle and a 4WD at the intersection of Southern Cross Drive and Ratcliffe Crescent.

Any witnesses to the collision who have not yet spoken to police are urged to contact ACT Policing Operations on 131-444. Alternatively, they can call Crime Stoppers on 1800 333 000, or via the website act.crimestoppers.com.au

Belconnen’s designed probably worked about 30 years ago but today it needs massive work just to keep the traffic flowing without putting intersections every 500 metres.

Until a few days ago I lived in a house backing onto the next intersection on Southern Cross Drive towards Holt, I hoped over the fence to assist with a similar accident involving a motorbike on the Ross Smith Drive intersection around two years ago (saw many accidents on that intersection, including near misses with pedestrians as the foot underpass is in the wrong place). Traffic travels too fast along that stretch of Southern Cross Drive for vehicles to cross two lanes of traffic, then enter another two lanes of traffic travelling the other way, you need to be on the ball and watching very carefully. I feel the intersections are badly designed. Hoping the motorcyclist is OK.

Russell Nankervis - 6 hours ago
Lori J Tas better vote Greens then. They value public institutions like this View
Monica Tiffen - 8 hours ago
It is a very interesting place. I hope things are worked out!... View
Teresa Layton - 9 hours ago
Mark Huppert agreed. What an obscene amount of money being thrown at something that requires no change. View
News 70

Anthony Briscoe - 8 hours ago
Barr BARR from opening his mouth and send the RAT to kingdom come for a start View
Jack Hearps - 9 hours ago
Yep ... ignore international perspectives and focus on our navel ... especially enriching our local religious zealots ... lib... View
Russell Nankervis - 10 hours ago
The Canberra Liberals will never change. Climate change affects us all and the UN set important benchmarks to meet. Pretty su... View
Food & Wine 14

chewy14 - 12 hours ago
Another great sentencing outcome by our courts that will really provide a great disincentive to individuals in the community... View
Food & Wine 1

Unlicensed driver to face court after driving at police, failing to stop