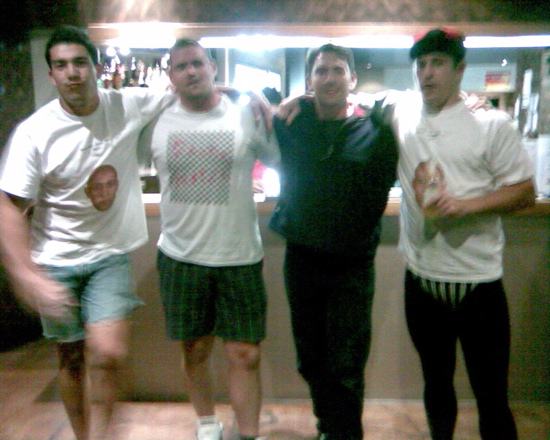 The RiotACT Rugby Review Podcast 14 of 2007 is available now. It features the music of Dahahoo from their new album Tarantism.

The beer for review this week is Leffe. The recording was done in All Bar Nun in O’Connor amidst much mirth and with many thanks to the bar for accommodating us.

As luck would have it our podcast coincided with the arrival of the Brumbies for their “Mad Monday” which is why we have the above photograph of Che and three Brumbies providing mutual support to each other.

The T-shirt with the picture of George Gregan on it says “have you seen this man?” and on the back they had a red cross with the words “Search Party”. We were informed, many times, that it has been 8 years since George went out with the boys on mad monday which is a sore point for some. Young brumbies kept pouring their Bacardi Breezers onto themselves to “give george a drink”. They went so far as to invite members of the public to “give George a drink” and even offered to buy us drinks so we could help out. It wasn’t just the younger players wearing the shirt, Mortlock and Larkham were also wearing them (but not pouring drinks over themselves deliberately as far as I noticed).

While at times it felt a bit like swimming with sharks being in the same room as so many very large, very drunk and boisterous men I have to say they were no trouble at all and pretty good blokes. Aside from offering to buy drinks for bloggers they actually swept up in the back room after themselves. A class act.

Oh and if you want to drink like a Brumbie (at least late on Mad Monday) you need a table covered in Breezers and “jam donuts”. A jam donut is a shot of chambourd with a lime and sugar rim and a splash of baileys floated over the top.

The feed for podcatching is http://the-riotact.com/wp-rss2.php?cat=43.

Feedback and comments are much appreciated either below, or to rugby@the-riotact.com

Listeners who would like to come along and hear the live recording should email us, or take a chance that we’ll be there on Monday night for pizza and pint night.

If you want to try your tips against ours then email them in by COB Monday to the above address.

The tips this week are:

That thing with the George t shirts is a hoot. I miss creative drunken antics with one’s sporting club. That particular antic is a pearler.

“While at times it felt a bit like swimming with sharks being in the same room as so many very large, very drunk and boisterous men I have to say they were no trouble at all and pretty good blokes. Aside from offering to buy drinks for bloggers they actually swept up in the back room after themselves. A class act.”

Well, it’s not as though they are rugby league players. 🙂

And you should see the press gallery once they get their reports to bed.

It’s not just sportsmen & women, I imagine a lot of the Treasury staff will be partying pretty hard tonight.

beer tastes the best when you are physically exhausted.

& they’ve just finished a long, hard season. Constant training, playing, all the pressure. Same for everyone really…..I’ve been known to join in on a big night out on completion of a big project at work.

well they seemed to be having a lot of fun and weren’t hurting anyone.

Why do you suppose sportsmen & women have to get excessively drunk after matches. I am not referring to the Brumbies in particular but to sports people in general.

Thanks to Mark Gerrard for bringing me into the photo, hope you had a good night fellas, and good luck for next year

Suz 'olmes - 40 minutes ago
How about something nice? Invest some money to clean up the tavern and make it more family friendly or a space for cafes. No... View
Jenny Keeley - 3 hours ago
I already have 3 McDonald less than 10 minutes from my house. Put something else there, anything else! View
Chris Goodrum - 9 hours ago
Many Happy New Years Eve’s spent there, met my partner there many many years ago! It should be heritage listed not knocked... View
News 19

Julie Macklin - 2 hours ago
And that is the most constructive comment you could come up with 😂 View
Warwick Alsop - 4 hours ago
Gotta love those NIMBYs View
Marea Fatseas - 7 hours ago
Who said the proposed facilities in Fyshwick are “going green”? How is CRS recycling just 5 percent for local use, export... View
Breaking 1

Yuri Shukost - 6 hours ago
Barr will find any reason not to build a new stadium or renovate the existing one. I suspect he’d find the money if it affe... View
Fred Pilcher - 6 hours ago
Good news. Sanity prevails. View
Ben Jones - 10 hours ago
Tom Allen where is this mythical stadium ? View
News 22

Chris Endrey - 10 hours ago
Who is most immune to hardship, who is pampered most, living the life that even the Gods would envy? The answer, clearly, is... View
Spiral - 10 hours ago
"But that is, of course, not true – our society chooses to devalue the arts because the focus of all of our energies is mon... View
Acton - 12 hours ago
Many, if not most in the arts community have long shown utter contempt for us in the broader community and made a living out... View
News 15

@The_RiotACT @The_RiotACT
Interested in purchasing a home through the land rent scheme? Check out this beautiful four-bedroom home for sale in Moncrieff https://t.co/C8dibvyzPU (39 minutes ago)

@The_RiotACT @The_RiotACT
Hungry for a nature fix in your own backyard? From tomorrow, the ACT Government is waiving entry fees to Tidbinbilla Nature Reserve until the end of 2020. The koala enclosure has been upgraded and being late winter, you might even spot a platypus https://t.co/NDT7TRJofV (3 hours ago)