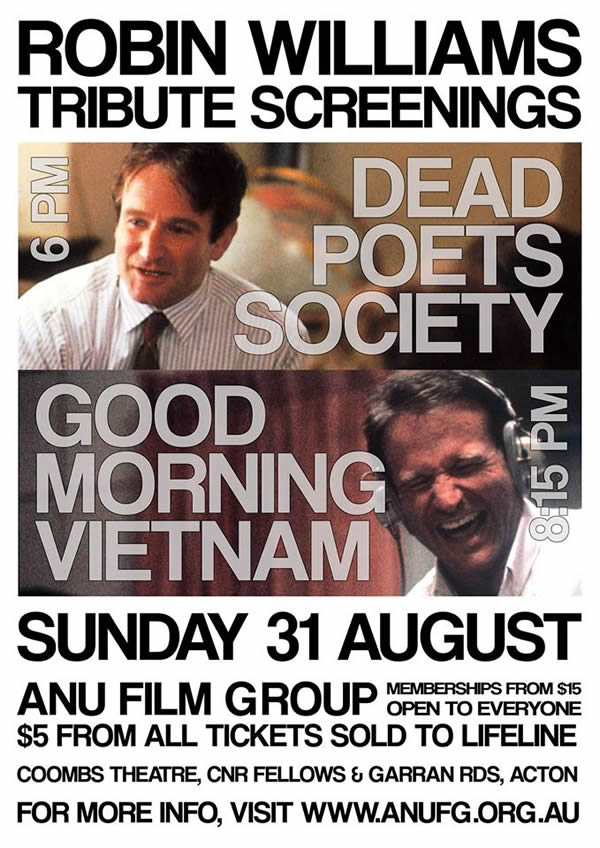 The ANU Film Group, Australia’s largest film society, will be celebrating the life and legacy of the late Robin Williams with a special tribute screening of two of his most beloved films – Dead Poets Society and Good Morning, Vietnam – on Sunday 31 August at 6 PM.

Membership of the ANU Film Group is open to everyone, and will be available for purchase at the door from $15. In recognition and support of those battling depression, the ANU Film Group will be donating $5 from all sales made on the night to Lifeline Canberra.

The ANU Film Group is a not-for-profit organisation that has been operating since 1966, screening over 150 feature films a year for the Canberra community, from the latest Hollywood blockbusters to foreign, independent and classic films not seen anywhere else. Located in the ANU just behind the National Film and Sound Archive, the 370-seat Coombs Theatre is fitted out with full cinema set-up with an 8.5-metre screen, professional digital and 35mm cinema projectors, and a digital surround sound system.

Mrs. Doubtfire or nothing for me…

TheSilver - 53 minutes ago
There is literally no good evidence that "social distancing" or "wearing masks" can reducing risk. At best you can say we don... View
phydeaux - 2 hours ago
Quite so. To put some rough numbers on it, 2017 was a peak flu season in which near 1200 people died, but the 4-year average... View
chewy14 - 2 hours ago
Can't remember when anyone said anything about compulsory flu booster shots? We are talking about Corona Virus, which is sign... View
Community 1

Ten things to do in Canberra this week (3 – 9 December)

@the_riotact @The_RiotACT
#Gungahlin's proposed #tennis centre is a step closer with a consultant hired to come up with a preferred design for the facility https://t.co/7htQ6Obh5D (56 minutes ago)