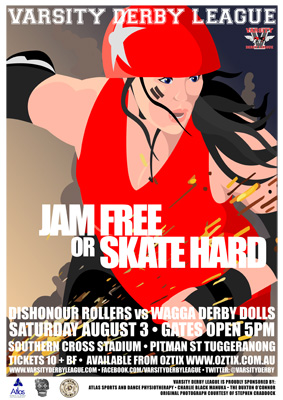 The Varsity Derby League DisHonour Rollers will take to the track on Saturday 3 August for their second roller derby home bout against the Wagga Derby Dolls’ Murderous Crows at Southern Cross Stadium, Tuggeranong.

The DisHonour Rollers won their July 13 bout against the Misfit Militia – can they win again against the Murderous Crows, eager to get their first big win for their league? Come on down to the stadium and watch the action!

Jim Jim - 7 minutes ago
Balanced journalism Ian, neither political party are doing that fantastic a job and deserve your devotion. Be critical of bot... View
Charny Barney - 19 hours ago
Are there any more policy promises they are going to back flip on? Alistair's indecision and poor decision making is not a go... View
Sue Ellen - 1 day ago
Elroy Jones Yes. It's one of the prettiest areas of the lake. It used to be nicer before they bulldozed all the trees on the... View
News 20

Brice Smith - 4 hours ago
Malcolm Snow is a conservative. Got nothing to do with Barr. View
Brice Smith - 4 hours ago
Good old conservative Malcolm Snow, strikes again. That’s the type of dumbassery we get from the Libs... View
Cary Elliot Johnson - 7 hours ago
Get out. And i was feeling positive about asking Mr Gentleman about getting a Batcave Interchange developed in Lanyon. Booooo... View
ACT Election 13

Scott Humphries - 14 hours ago
"Braddon of the south" . So the light industry and commercial businesses will eventually be pushed out by apartments, just as... View
Marc Edwards - 16 hours ago
And 5 minutes later the residents will all start complaining of the noise etc. Some areas should remain commercial, not every... View
Jp Romano - 19 hours ago
A great area - great building and a great developer. View
Opinion 31

Charny Barney - 19 hours ago
Yes - lets build more trams - first to Woden, then everywhere else in Canberra. It's brilliant. We have roads everywhere, so... View
Charny Barney - 19 hours ago
Magical thinking! Brilliant and perfect description of lib policies 🤡 View
Geoff Roberts - 22 hours ago
They can afford to offer the world because they know they have no chance of forming government. View
show more show less
*Results are based on activity within last 7 days

The Canberra Liberals have unveiled a suite of policies designed to drive down the cost of motoring in the ACT,...
News 14