Experts in buying, selling & renting
Your property, your future
5 March 2021 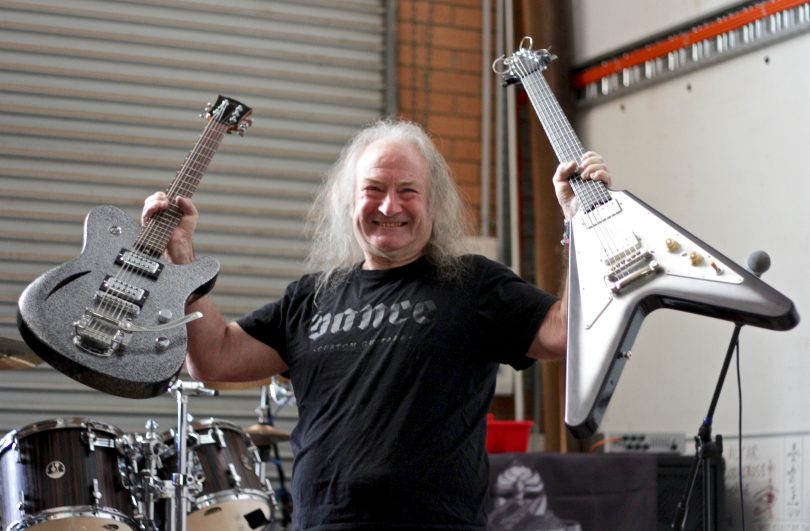 Rusty Vance with two of his custom guitars, the Glitterbomb and a Flying V, in his Fyshwick workshop. Photo: Michael Weaver.

From flying P-3 Orion aircraft in the air force to making Flying V guitars, there is a reverb around Russell ‘Rusty’ Vance’s custom-made guitars that are making a big noise in the Australian and international music scene.

While working in the Royal Australian Air Force, Rusty had a posting to RMAF Base Butterworth in Malaysia and found he had a bit of extra time on his hands. His idle fingers got busy and he started playing in a couple of punk bands.

After 20 years in the air force, those idle hands needed to get handy so he started building and repairing guitars from his garage in the Canberra suburb of Gilmore.

He has now built a business making high-end and highly sought-after guitars built to withstand the sound barrier.

“The whole notion of this business is to build quality guitars, and after doing repairs and making a few guitars here and there, you get to understand that a lot of guitars are made at a fairly basic level,” Rusty tells Region Media.

“I’m very proud of the fact that these guitars are chosen by the top players here in Canberra – we don’t endorse them.”

Among them is Steve Gray at Better Music in Phillip, and Samantha Bennett from Canberra punk rock band Glitoris, who has her own signature Vance model called the Glitterbomb.

When Rusty made his first guitar, a seven-string Flying V, of course, he knew there was a demand for quality guitars rather than factory-made quantities. He also knew his passion was in the Canberra music scene, especially for girls who want to rock. 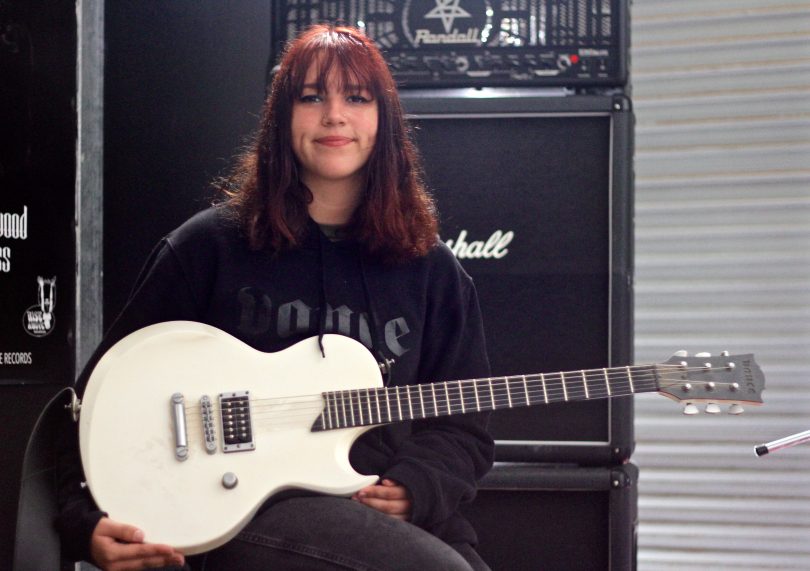 Liv McMahon is an apprentice at Vance Guitars who now has a career as a luthier in front of her. Photo: Michael Weaver.

Seventeen-year-old Liv McMahon came to Rusty’s workshop two years ago as part of a work placement program through school. The young music protege with an affinity for old-school metal bands such as Metallica, Black Sabbath and Pantera asked if she could get a job there.

She started full-time in January this year and Rusty says she will be the best luthier in Australia. Liv already has the specs in place for her first guitar, a metallic black and purple Flying V based on the one used by James Hetfield from Metallica.

“This is the best opportunity I’ve ever been given,” says Liv. “I wanted to quit school but I didn’t really know what I wanted to do. But Rusty gave me a chance when he could have given it to so many other people.

“He’s already taking my ideas onboard and I’m learning so much. There are so many parts to making a good guitar sound great.

“You think you just pick it up, plug it in and it makes a noise. You wire one thing the wrong way and the guitar just won’t work.”

Rusty is now making about 25 guitars a year while taking on the usual gamut of guitar repairs.

“Our guitars are made to last forever, and they’re made for very specific players,” he says. “This is not a backyard operation with a few tools of the trade – it’s all about precision and the stability of the woods. We take the time to let the wood cure before making it into a guitar.

“That’s the standard I went into this with. If you’re going to build a good guitar, you can’t take shortcuts. These guitars will still be going strong in 50 years, easy.”

Check out Rusty’s guitars on the Vance Custom Guitars website.