There is a great and unmet need for year-round emergency shelter in Canberra.

While no one had to be turned away, on many nights the “duty” shelter was full to normal capacity (eight guests) and on several nights an additional guest was admitted.

Mr Griffiths said that between opening on 22 April and 31 August 2018, homeless men had sheltered 582 times in the three halls, with nightly numbers more than doubling once the cold weather started in early July.

In the same 19 weeks in 2017, but open then for only five nights each week, 310 “guest-nights” were provided by the same three halls at St Columba’s Uniting Church and the Salvation Army Canberra City Corps, in Braddon; and All Saints Anglican Church, in Ainslie.

Mr Griffiths said there had been no serious incidents, with most grateful and cooperating with the two or three volunteers on duty each night.

“Many of the guests are exhausted and cold on arrival and go straight to sleep,” he said.

Almost all the 164 current volunteers were now experienced.

The attached graph demonstrated the increased level of demand for emergency shelter in inner Canberra for men, now that it could be provided every night in winter. 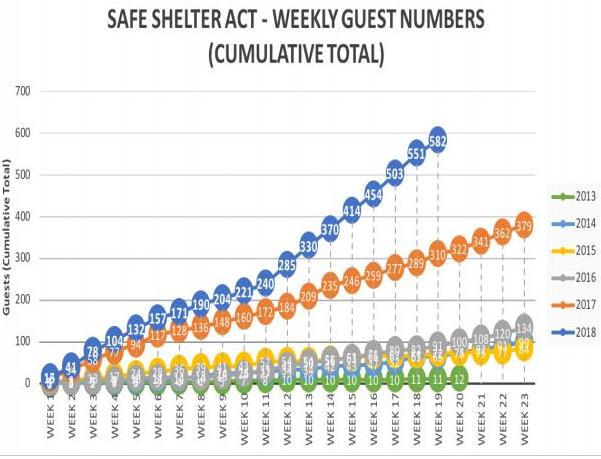 Mr Griffiths said that a recent Australian Institute of Health and Welfare (AIHW) analysis of the 2016 Census numbers suggested that the number of rough-sleeping homeless women was about half that for men, although that proportion might increase markedly if sufficient immediate shelter could be provided for those thinking of escaping domestic violence.

“It seems clear that there is a great and unmet need for a year-round emergency shelter in Canberra,” he said.