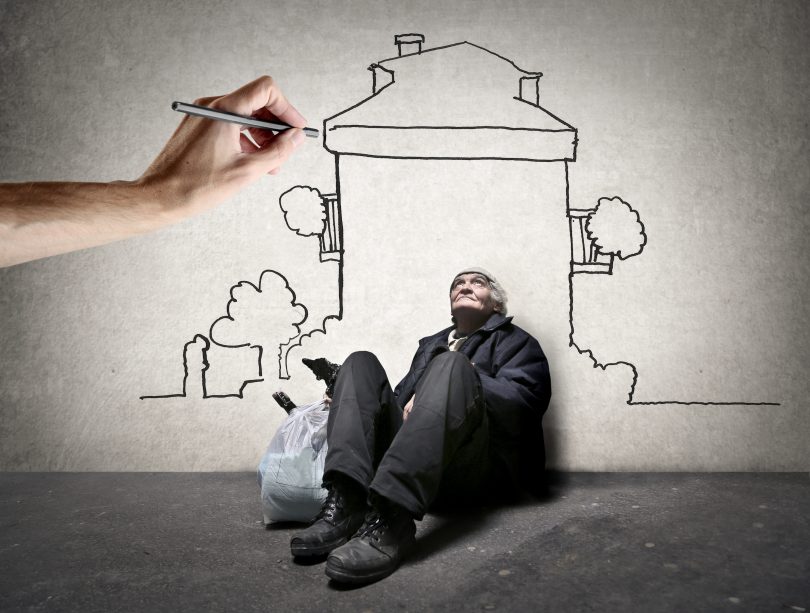 Safe Shelter ACT will ramp up its campaign for emergency accommodation in the Territory after its first winter of providing a roof over the heads of homeless men seven nights a week.

Coordinator Richard Griffiths said the organisation now had some significant numbers and patterns to support its approach to Government, which he said was still not doing anything to alleviate the situation.

“Now we have these numbers it’s going to be a much more heated debate,” he said.

Mr Griffiths said two clear messages had emerged from Safe Shelter opening every night in the inner city: there is a great need for immediate, walk-in shelter for the ACT’s homeless every night; and the follow-on arrangements, to get people out of homelessness and into permanent accommodation, are disjointed and often ineffective.

He said Safe Shelter was considering whether it could open 365 days a year, and was also working with Vinnies and Rotary on a longer-term project to establish supported accommodation centres for both men and women that would also provide the services people needed before they went into public housing, which is where the Government needed to step up.

“The Government’s got to provide the public housing, because these people are never going to be able to afford their own, and they can’t get involved in the Canberra rental market,” he said.

Vinnies was talking to the Government about a location for emergency accommodation, suggesting the disused Woden CIT campus could be a possibility especially as it could also host other services.

Safe Shelter closed last Saturday after its 161 volunteers provided emergency shelter for 95 homeless men for a total of 743 “guest nights” in the 23 weeks it was open.

One shelter was open every night, at either St Columba’s Uniting Church or the Salvation Army Canberra City Corps in Braddon, or at All Saints Anglican Church, Ainslie.
Last year Safe Shelter volunteers looked after about 60 guests for a total of 381 “guest nights”, with the three shelters open only Mondays to Fridays. 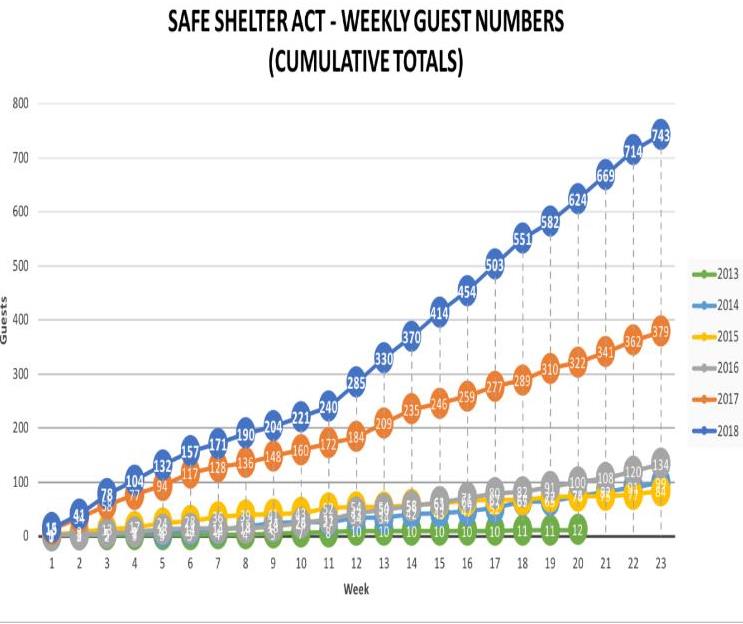 In 2017, the average number of guests over winter was 3.32 guests per night, on each of the five nights each week. This year the average over the whole of winter had been 4.61 per night but, once the cold weather started in early July, the average increased to more than six guests each night, with shelters at or just over their official capacity (eight guests) on many nights. On two occasions, potential guests had to be turned away to sleep on the streets.

“Working from the names our volunteers recorded, 50 of the guests stayed for a week or less, which was good as it suggested that they had been able to get sorted out before their homelessness became entrenched. Not so good was the return over several weeks of 10 to 15 guests, suggesting that their alternative arrangements had just been temporary,” Mr Griffiths said.

He said 21 guests came and stayed for months, suggesting that the welfare agencies were either not making contact or were unable to help them find accommodation. Several were refugees who seemed to have great difficulty getting help, possibly due to language or cultural difficulties, or government policies, and clung to Safe Shelter like it was a life raft.

Very few guests came to Canberra for personal reasons; others came for jobs but were unable to find affordable accommodation quickly. Others had varied reasons for being homeless such as housing costs, legal problems, or mental health issues.

Mr Griffith said this was just the inner city area and Vinnies believes there are at least as many people out in the suburbs who are homeless and on the streets.

He said the numbers suggested that for the inner city, a shelter for 10 men would be adequate.

“If you double that for those out in the suburbs, a 20-person hall is not impossible to provide,” he said. “If you say in accordance with the AIHW’s analysis of the census figures there’s about half as many women as there are men who are homeless, you need shelter for 10 women, plus a refuge for the women escaping domestic violence.”

Meanwhile, men who need shelter next year will sleep a little easier with the provision of life-saving defibrillators, first aid kits and training donated by Canberra-based medics.
Safe Shelter volunteers had put out the call, which was swiftly answered by Community Medics Australia, an ACT-based not-for-profit established last year to provide mobile integrated health services for vulnerable members of the community.

Safe Shelter ACT is preparing a full report on this year’s activities and preparations for winter 2019 will commence shortly.

Given the numbers of guests at Safe Shelter in the final weeks, it seems this fantastic service might need to run all year.

It’s time that local government got serious about building low cost accomodation for homeless people in the territory. Perhaps purpose built villages as have appeared in many cities overseas? https://charterforcompassion.org/problem-solving/tiny-houses-for-the-homeless-an-affordable-solution-catches-on

Want to fix homelessness?
The ACT Government should operate the Canberra leasehold system the way it was designed.

Stop renewing leases for nominal cost. Renew the 99 year leases at market value. That will end the ACT housing bubble and return values to sensible levels. That way housing will become affordable again.

Mark, Sorry if I have misread your comment.
Are you saying that if I bought a block of land for say $500k today, when the lease ran out after I’d been there for 2 years I should have to pay another $500k to renew the lease?
If that’s what you’re saying then I think that’s a very bad idea.

Homelessness is a significant problem in our communities, there isn’t enough support for the charitable groups to keep up with the demand for shelter and food. Homelessness and the lack of subsidised public housing is a welfare problem that isn’t getting enough attention and funding.