Government Bend on the Kings Highway after the Currowan Fire. Photo: Supplied.

Fire damage to the Kings Highway is likely to keep the main artery from Canberra to the south coast closed for a month or more.

Acknowledging that businesses along the coast are hurting from the lack of tourists in the peak holiday season, Mayor Innes said: “As soon as we can give the green light and say ‘come on down’ again to our visitors, we will.”

The Kings Highway is likely to be closed for a month at least. Member for Bega Andrew Constance, Eurobodalla Mayor Liz Innes and Acting GM of ESC Warren Sharpe said today that there is at least three weeks work to be done after access is gained to the Clyde Mountain. (see video 2 in comments)

Mr Constance said the Currowan fire has jumped the Kings Highway several times and is burning on two fronts towards the top of the mountain.

According to Mr Sharpe, “the fire is making its way down along the Kings Highway, where it has burnt very hot through the top of the Clyde. The Monga fire is burning south and will join up with the Kings Highway fire”.

“There is no stopping this thing. There are a lot of trees down. We just can’t put road workers in there.”

In a small piece of good news, the Carwoola Fire Brigade has confirmed that Pooh Bear’s Corner on the Kings Highway is safe. Reporting via social media, Carwoola RFS says that while the fire has burned all around, “the beloved fluffy toys at Pooh Corner are all ok. Thanks to Carwoola Deputy Captain Lewis Conn and his crew for checking during one of their night shifts”. Carwoola RFS have confirmed that Pooh Bear’s Cave is safe on the Kings Highway. Photo: Facebook.

“Currently two aircraft are working across the fire ground today to assist with fire suppression, with a third assigned to detect hotspots and feed intelligence back to the Incident Management Team as visibility allows. 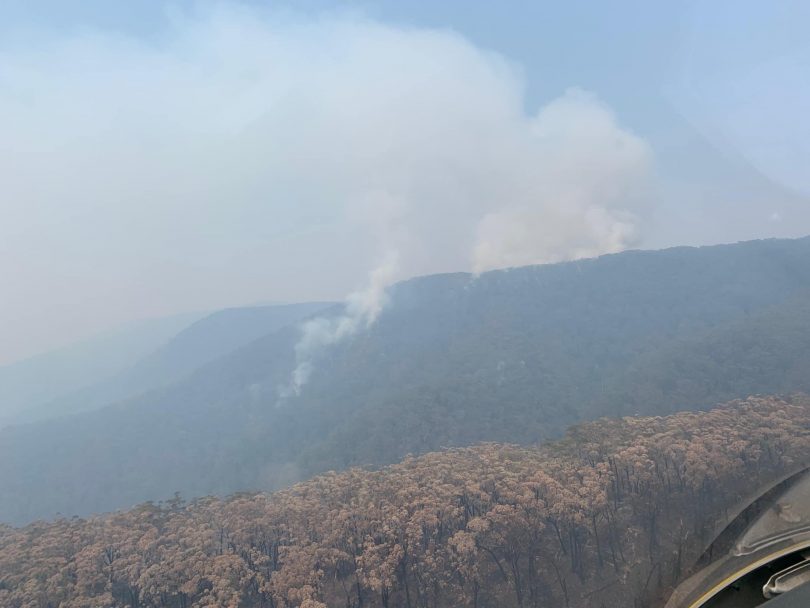 The Currowan fire is burning through the Clyde Mountain. Photo: Andrew Constance.

With 40 per cent of the Eurobodalla Shire ravaged by the Currowan bushfire, and the Charleys Forest fire still active from the top of the Clyde and making its way north through the Morton National Park, a new threat comes from the Araluen Road fire.

This fire in the Deua River Valley ignited yesterday and is burning in inaccessible terrain. Two water bombing air tractors, a helicopter and multiple ground crews are fighting the fire. RFS and NSW Police are investigating the cause of the fire.

“It’s really important the RFS get on top of the Araluen fire,” Mr Constance said. “They did an amazing job last night in the Araluen Valley.

“We absolutely give our appreciation to those out there keeping our communities safe. Forestry, National Parks & Wildlife Service, Local Land Services, Council, Health and NSW Police have been working around the clock with the RFS to keep the community safe.

“We can ill afford any other fire events in this shire. We have a major fire to contend with, and an outbreak on Araluen Road. We cannot afford our resources being stretched any further. We need to get over a very dangerous period over the next four or five days,” Mr Constance said. The Bureau of Meteorology says that while temperatures should be lower than last week’s near 50-degree maximums, Adelaide, Melbourne, Hobart, Canberra and western Sydney are all forecast to see at least one day in the high-30s or low-40s before the end of 2019.

Mayor Innes said: “Everyone from Batemans Bay to Moruya needs to have their fire plans ready to enact. Look after one another.

“The best thing you can do for the RFS right now is to make sure your house is safe and that your fire plan is ready to enact. We will get through this.” While the holiday period has been very quiet at the coast, traffic has increased down the Brown Mountain route via Cooma after Christmas. Businesses from Braidwood to Bega are reeling from the lack of tourist trade.

Mayor Innes urged local and visitors to be aware and have a fire plan in place.

“No-one can be as prepared as someone who lives locally, so tourists need to be aware as everybody else down here.”

The Nerriga/Braidwood Road through to Nowra is also still closed and there is still major work required in the Sassafras area.

But ask the liberals, still no climate change

Lesley Fisk you get to see a bit of different country! Good suggestion!

It’s a lovely scenic drive too! 🙂

I wonder how many people know how / why the cave on the corner was created???
You might be surprised if it’s history

Ricky Toms it was an explosives depot, wasn’t it?

Ricky Toms that’s what I thought.

Tony Hurditch and now it’s all cute and fluffy

Ricky Toms ssssh Im so not telling my daughter, she’s 26…..😬

I believe Pooh bear corner began many years ago; a family used to travel from Crookwell to the coast and Mother put a toy there to break the trip up for the kids.. and it just continued from then….

It is so sad to see this, the little towns will find it so hard, especially this time of year.😥