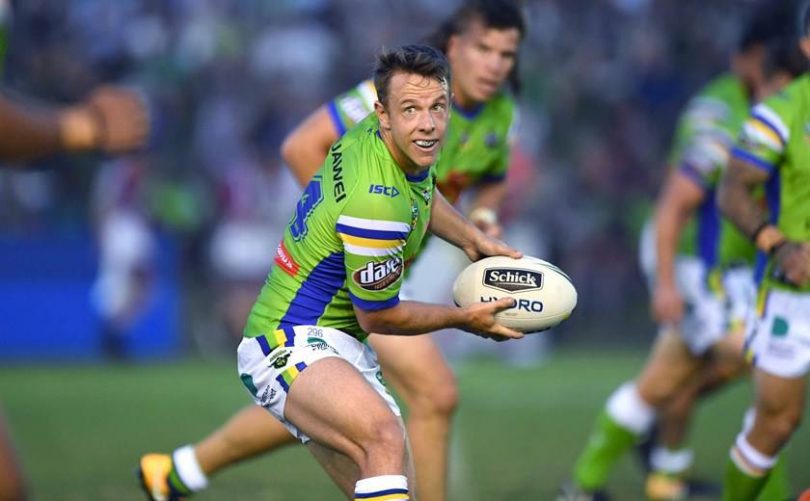 The stage is set for Sam Williams to give his best audition when the Green Machine needs him most. Photo: Supplied.

Raiders playmaker Sam Williams has been handed the perfect opportunity to stake his claim for the starting halfback position for next season after the Raiders dropped Blake Austin for their do-or-die clash against the Bulldogs.

Williams hasn’t played an NRL game since he hurt the medial ligament in his left knee against Canterbury three months ago, with the halfback making his comeback from his injury in reserve grade.

It seems unlikely that Blake Austin will still call Canberra home in 2019 as rumours grow of his potential move to the Parramatta Eels, setting the stage for Williams to give his best audition when the Green Machine needs him most.

The playmaker knows the perfect audition to win the spot in the halves next season is to bring home the two points for the Raiders.

“Every time you go out there is certainly an audition,” Williams said. “I guess there is a little bit of talk about what’s going to happen next year with the halves and what Blake is doing; if he is going or staying or whats going on.

“So it is important that I go out there and play well but realistically it’s just about winning the game. If you are winning football games, it usually takes care of itself.

“If we go out there and I do my job and we win the game, that’s the best audition that I can have.”

Hooker Josh Hodgson backed Williams to come in and make a difference in their right edge defence which was sorely lacking in their disappointing loss to the Brisbane Broncos on Saturday night. Blake Austin was targeted by the Broncos attack last weekend, with the off-contract star missing three tackles, resulting in Ricky Stuart dropping him to the bench.

“I think [Sammy] will go really well. It was obvious for everybody to see we had some issues on the right edge on the weekend when the Broncos targetted there and I think Sammy is a really composed head,” Hodgson said.

“He is very talkative and that will really help our defensive systems. He knows he needs to talk and make sure that we are firming up and everyone is doing their own job on that right edge.

“He has been around a while and he knows he has to come in and do his job, nothing too flashy and to get us around the park.”