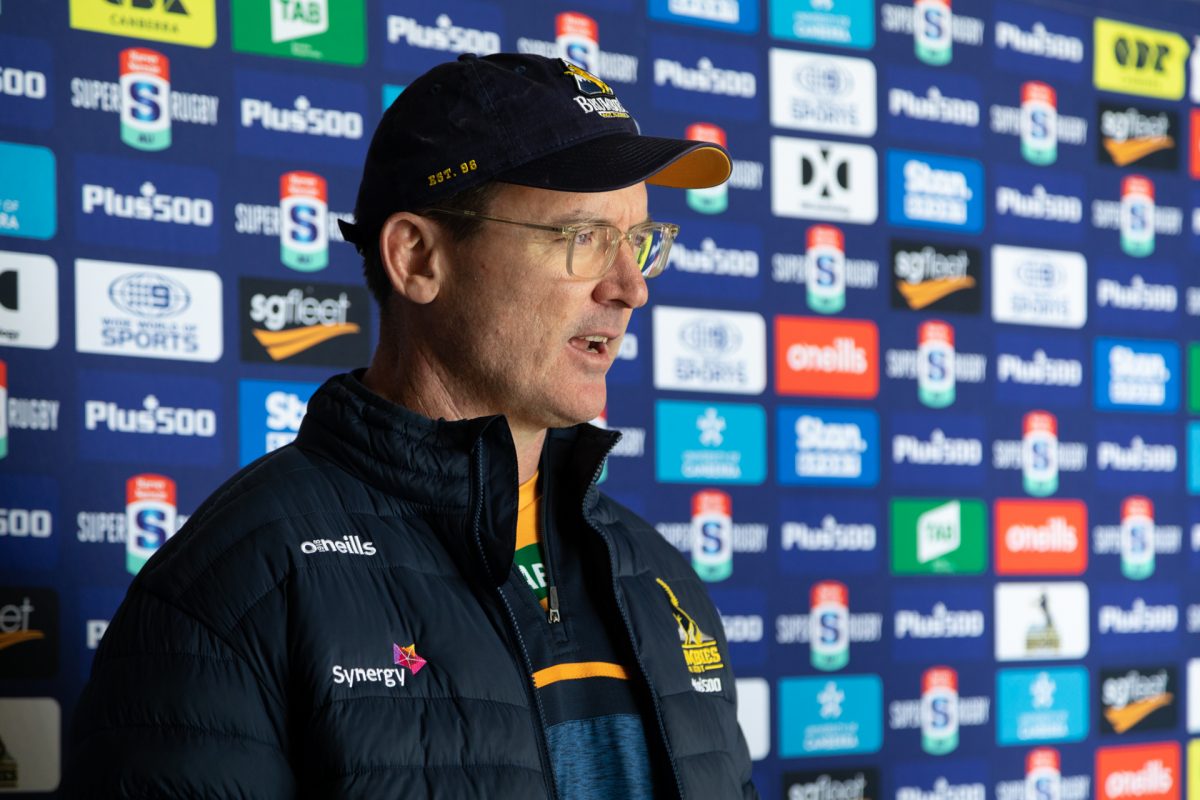 Head coach Dan McKellar is moving on from the Brumbies. Photo: Michelle Kroll.

Having witnessed every Brumbies finals campaign in their Super Rugby history, it’s obvious there has always been a distinctly different mental approach when facing Kiwi opponents, especially in New Zealand.

I was there in 1997 commentating at Eden Park when the Blues accounted for the Brumbies in the final, 23-7.

Going into the final, the Blues, led by Michael Jones and Zinzan Brooke, were the red-hot favourites.

Before the game, there was a sense of foreboding.

The same feeling prevailed heading into the final against the Crusaders in Christchurch in 2002. On a miserable, wet night, the Canterbury team demolished the Brumbies, 31-13.

And there was that same feeling again in 2013 when the Chiefs accounted for the Brumbies in the final in Hamilton, 27-22.

In 2015, after beating the Stormers, the Brumbies went down to the Hurricanes in the semi-final in Wellington, 29-9.

The Brumbies’ major victories against New Zealand teams have been at home at Canberra Stadium. They had a 33-20 win over the Hurricanes in the semi-final in 1997 and, of course, their most famous victory was in the final against the Crusaders in 2004 when they won their second title.

The statistics reveal just how difficult it is to beat New Zealand teams on their home soil.

This is why the Brumbies will need to produce something special to beat the Blues this Saturday night in Auckland.

Yet unlike the 1997 experience, the Brumbies camp this week exudes quiet confidence. This optimism has been garnered through their performance against the Blues at Canberra Stadium in May this season. Although the Brumbies lost 21-19 in that game, they know they can match them.

As they head into the game, they understand that it could be some time before the Brumbies are in this position again.

In 2014 and 2015 they fell one game short of making the grand final. In 2016 they bowed out to the Highlanders, and in 2017 they fell to the Hurricanes. Both losses were in the quarter-finals.

By 2018 that golden window had closed and the Brumbies finished 10th. It was Dan McKellar’s first year as head coach.

It has effectively taken five years to get to this weekend. But the window will again potentially close in a fortnight with McKellar, Irae Simone, Scott Sio, Tom Banks and Folau Fainga’a moving on.

Banks, at 27 years of age, has developed into one of the premier fullbacks in world rugby. Simone’s transition from, at times, a passive centre into an effective attacking weapon with an impressive skill set has been a revelation.

There are ready replacements for Fainga’a and Sio, but both have hit top form in the past month.

McKellar’s influence on this team has been enormous. His attention to detail, his desire to play running rugby, and his ability to ensure his side sticks to a game plan, have been key to the success of the side this season.

The rolling maul has become a crowd favourite. The box kick is still waiting to be fully embraced, but it has been effective nonetheless.

They are a team to be admired. They have been patiently building to this point in the season. The opportunity is there for them to take.