If you’ve got a spare half hour you can enjoy the complete spin package surrounding sacking all the staff at the School of Music. ANU’s posted the press conference to YouTube with this note:

Under the proposed new model students can, for the first time, receive academic credit for contributions to musical activities in Canberra and beyond. ANU will also build on the already significant technological advances that connect students with master classes, other students and innovations at world-class music schools, across Australia and overseas.

If you visit the video’s YouTube page you can even hit the “dislike” button. 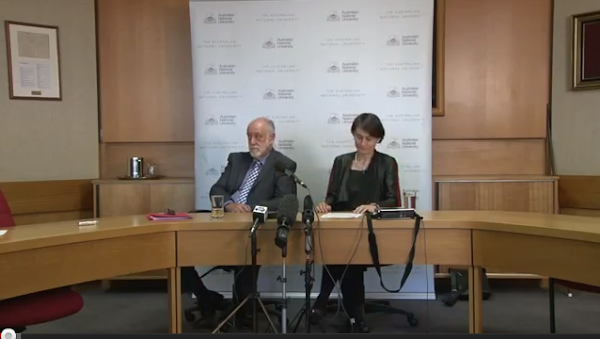 Actually c_c they’re claiming that they have build such a dedicated audio link. I can’t speak for whether they’ve succeeded, but they have some pretty clever sound nerds on staff. Or they did anyway.

They certainly made a big deal about building a collaborative telepresence link. What they haven’t said though is the quality of what is at each end.

They employ a proprietary echo cancellation technology, which is largely because they don’t seem to have bothered with proper rooms with sound absorption like a proper studio has. But I haven’t seen anything about the quality of the microphones or speakers. There’s no point having a good link if the speakers at both ends aren’t reference quality.

And even the link quality I would question, the specs say the following:
“minimum of 384Kbps, though preferably 512kbps up/down min”

To put that in perspective, those specs are at the lower end of what you’ll find even on YouTube in terms of bit rate and we should all have seen how bad the lower quality settings are on YouTube for audio.

For audio to approach the quality of a studio master recording, you’d be looking at 18MBps bit rate for something like MLP on a BluRay disc. And it is possible to stream this, particularly with the back end capacity ANU claims to have.

This technology sounds interesting for distance education and for some fun collaboration, but as the primary means for tuition and assumedly for grading work, I would want to see something very compelling.

That reminds me of the scene during the movie Flashdance when the geeky dude does a symphony on his electrical keyboards, all by himself with no other players. And the other scene when they’re talking about holding instruments with respect.

When I saw it at an open day a couple of years ago it was fine for solos but useless for duets.

The bit about making the school live within its means suggests corruption………..or something.

Now I own a few microphones, and I know heaps about audio compression. Just how do you teach or assess music with the many variables that telepresence brings to the performance that do not exist in person? Just how do you work on pitch and even timing when you have latency, compression, the characteristics of different speakers and microphones designs and models? Are the ANU really going to set up a proper reference quality studio in Canberra and another reference quality studio in New York, and stream uncompressed audio over the new? No, and even then it wouldn’t be the same as in person.

Actually c_c they’re claiming that they have build such a dedicated audio link. I can’t speak for whether they’ve succeeded, but they have some pretty clever sound nerds on staff. Or they did anyway.

Timmy Holness - 11 minutes ago
Roslyn Thomas . I think you need some coffee View
Tony Kingston - 17 minutes ago
I find it interesting that we have road rules and licenses to keep attitudes and opinions out of traffic. But egos often take... View
Peter Groves - 19 minutes ago
Don’t know how to turn a corner without drifting two lanes over. Can’t indicate intention, can’t maintain taillights. O... View
News 9

Lisa Morr - 30 minutes ago
Tom Leahey duh! they want more votes View
Joey Mann - 12 hours ago
Tom Leahey they don’t want to lower the voting age below the age of criminal responsibility, what are you on about View
News 8

Karl Edmondson - 1 hour ago
If only they ate mice. View
Lewis P Owlay - 5 hours ago
I believe you mean the Delta Myna View
Lyndsey Simcoe - 5 hours ago
Graham Hatch see! They are psychos! View
Sport 4

DrLin - 2 hours ago
Foresight serves you well, I received notice yesterday of a 12% increase to the price yesterday. View
Property 12

John Moulis - 3 hours ago
They must have a lot of pull. Even people on Sydney's upper North Shore who want to remove trees which are blocking the view... View
Pam Dovey - 3 hours ago
Margaret Hunt did you see this? View
Run_W - 4 hours ago
Wasn't this the Club that was complaining last month about being broke and if someone put planes on the lake it would mean th... View
News 12

Ben Johnston - 12 hours ago
"In a 50-minute ministerial statement this morning (22 June), Business Minister Tara Cheyne told the Legislative Assembly tha... View
summs - 15 hours ago
At least 15% of the budget went to 19 (2%) businesses whilst 23% of the businesses received less than $50? Was the scheme int... View
Motoring 3

David Hennessy - 15 hours ago
Wish they were as quick to fix the problems in the CTP system for pedestrians and cyclists who are damaged for life but have... View
show more show less
*Results are based on activity within last 7 days

Motorists involved in collisions with vulnerable road users may face a specific charge and much stiffer penalties if convicted under...
Opinion 85

@The_RiotACT @The_RiotACT
RT @HandmadeAust: We are very sad to announce that we need to postpone this weekend’s handmade market. This is not a decision we have made… (35 minutes ago)

@The_RiotACT @The_RiotACT
If you use your phone and drive you will get caught, Transport Minister Chris Steel said after new laws allowing mobile detection cameras in the ACT passed the Legislative Assembly this week https://t.co/zYUIF8PzLk (3 hours ago)