Sculpture Bermagui, on now – your head will spin 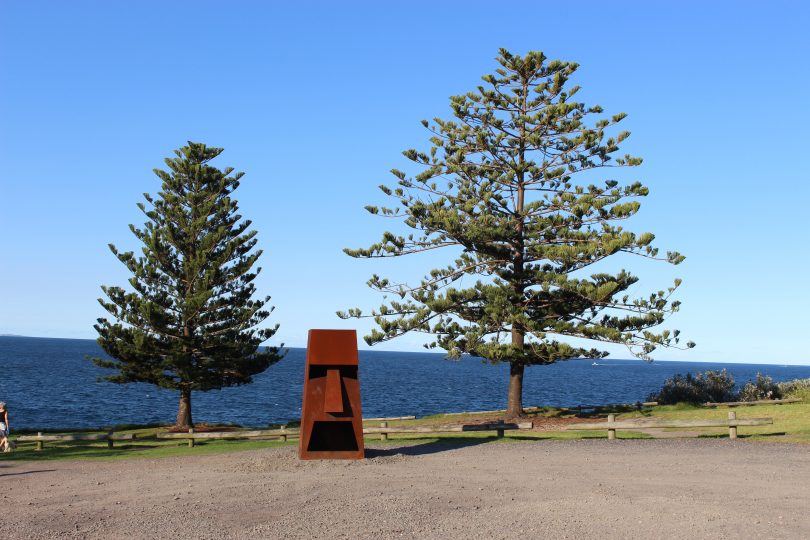 Summer in Bermagui is busy, a time when locals surrender their beaches and cafes to welcome tourists, but what only locals know is that autumn is the best time in Bermagui.

The water is warmer, the Gang Gang’s move into the Spotted Gums, a fire at night becomes an option again, the daytime sun is a little weaker but still warm on your shoulders…and sculptures appear on the town’s headland.

Sculpture Bermagui opened on Friday night and rolls through until Sunday, March 18 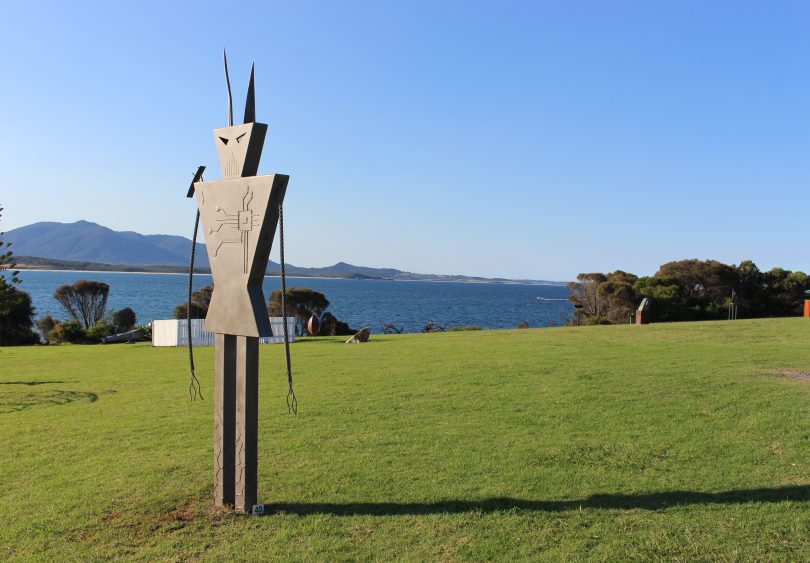 Works sit within the naturally sculptural landscape Bermagui offers, starting with the cathedral of Spotted Gums as you enter town, moving out to Montague Island floating on the horizon, and wrapped in the looming presence of Gulaga.

Over the 10 days of the exhibition, humans try and match that beauty with their own creations.

Perhaps there is some magic that happens when natural and manmade sculptures come together and create a buzz – part of the events 12-year success. 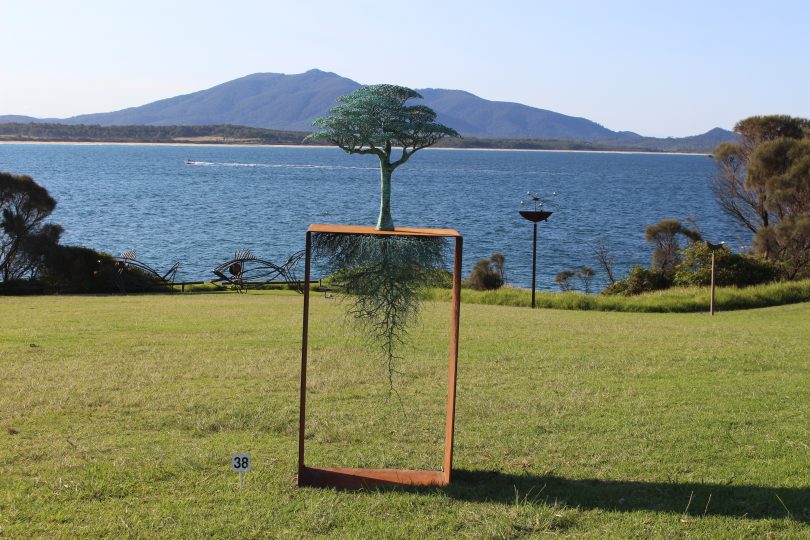 110 sculptures this year, a record – your head will spin as you take in the works dotted around Dickinson Point Headland and the Bermagui Community Centre. 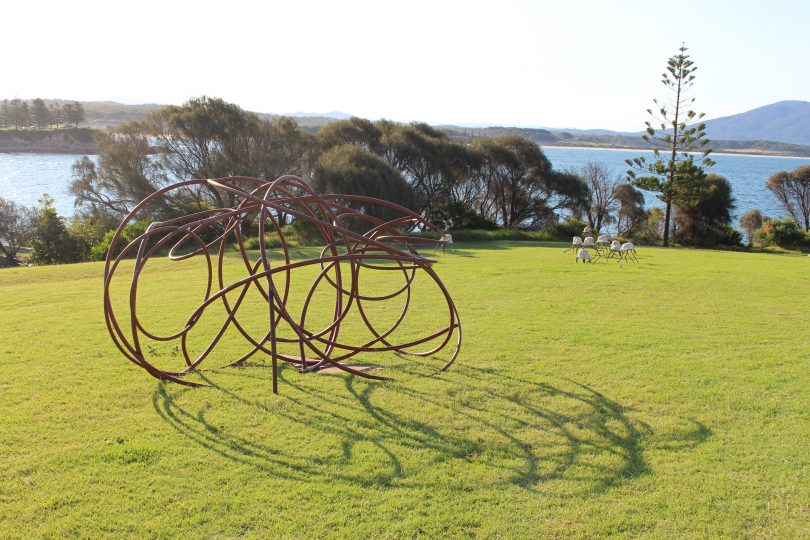 “Working with creative people is my ideal environment and the artists are very supportive and interesting, expressing their individual ideas and passion,” says Paul Payten, Sculpture Bermagui President. 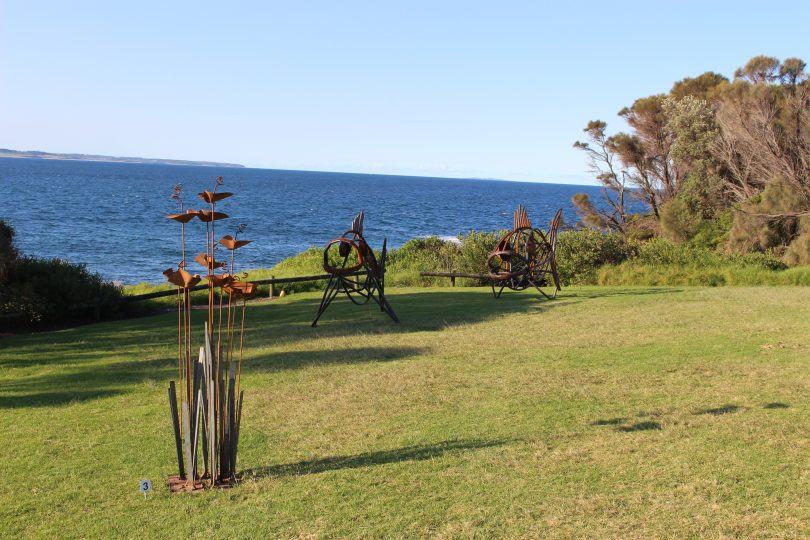 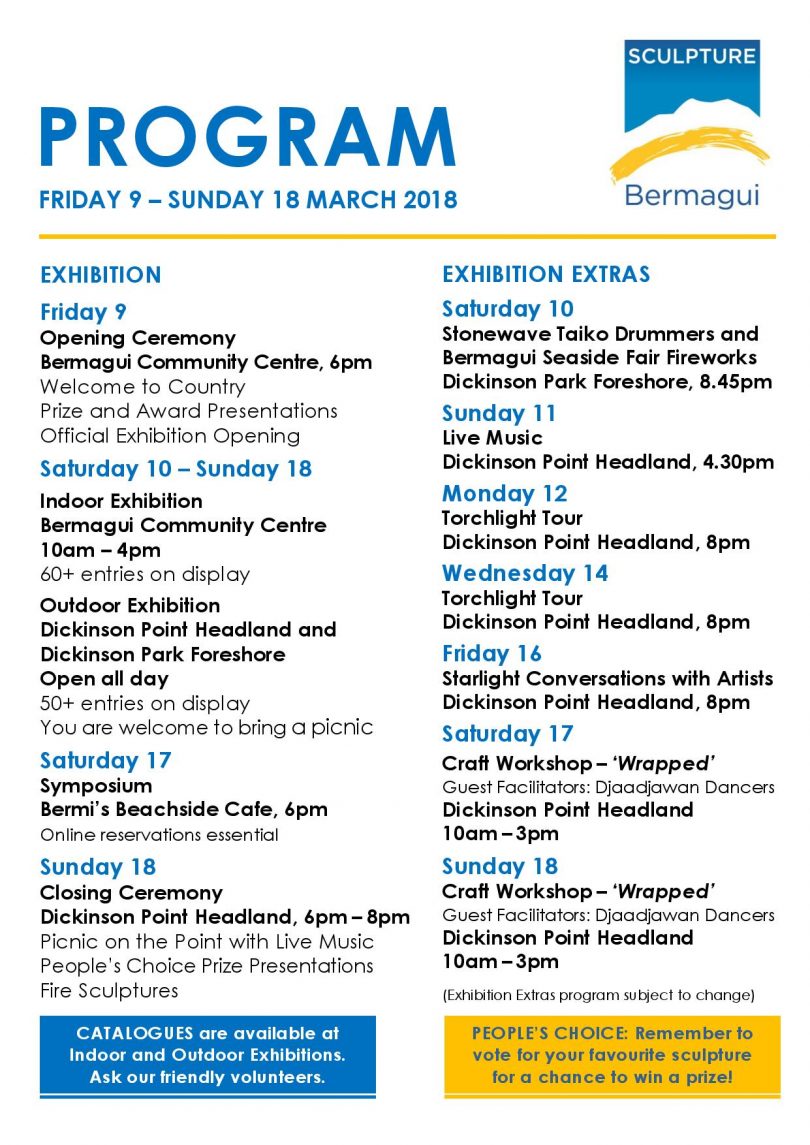 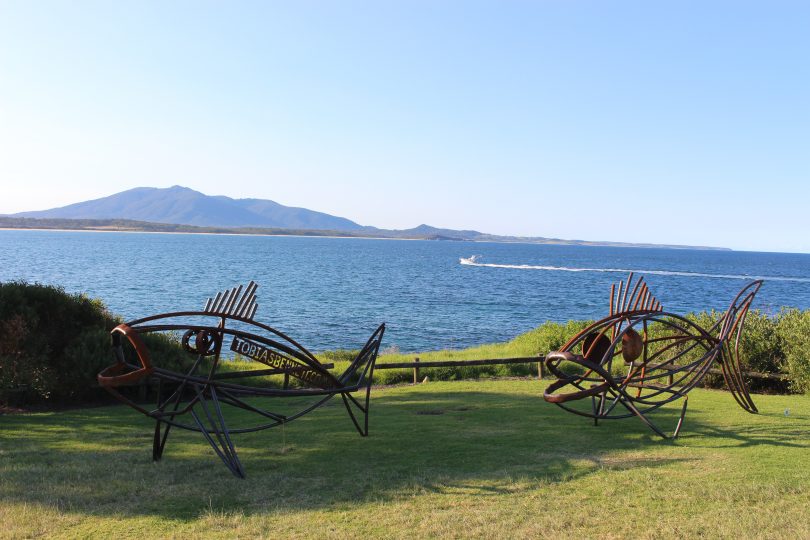 Entry to Sculpture Bermagui is free, but do the town a favour – buy a beer, bait, or coffee while you are there, better still have dinner and stay the night. 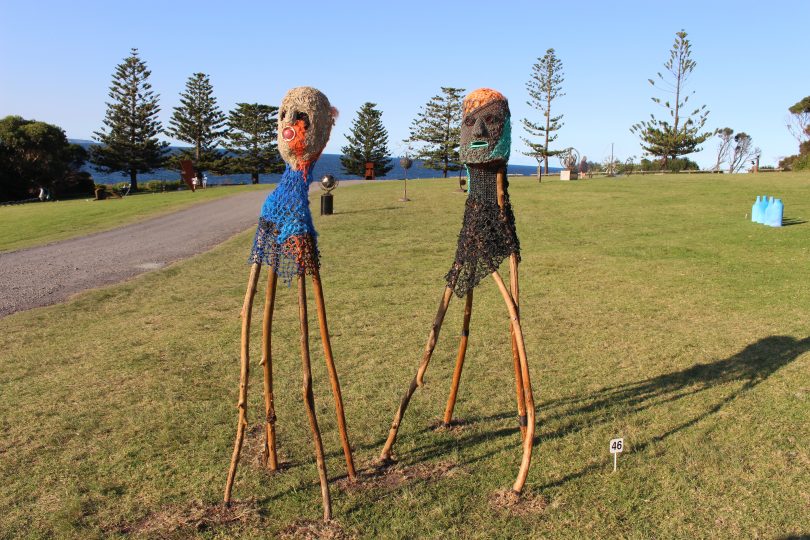 “I create contemporary ritual objects to embody the complexities and contradictions of our relationship with the ocean,” Sally explains. 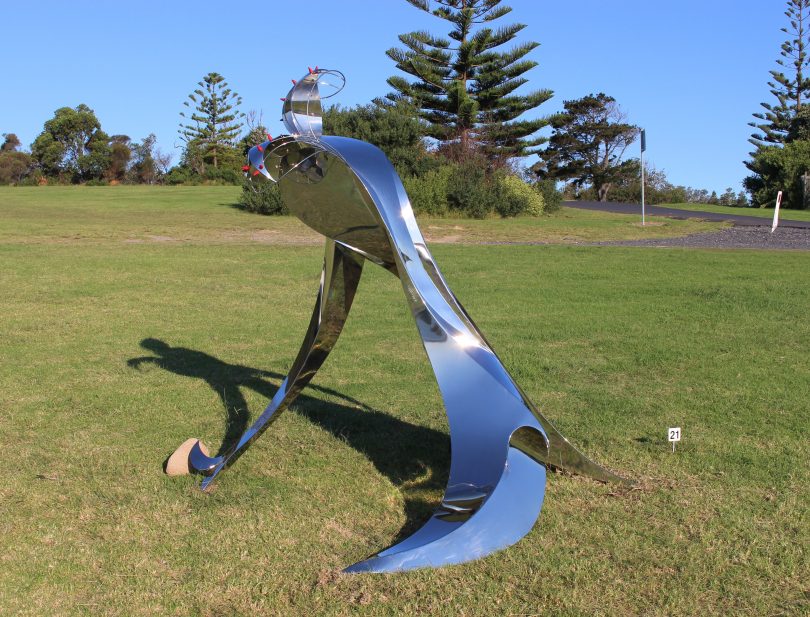 “Obsession” will catch your eye from the town’s main street. Made of stainless steel, John Fitzmaurice says it’s his twisted look at the female slavery to fashion and the high heel stiletto. 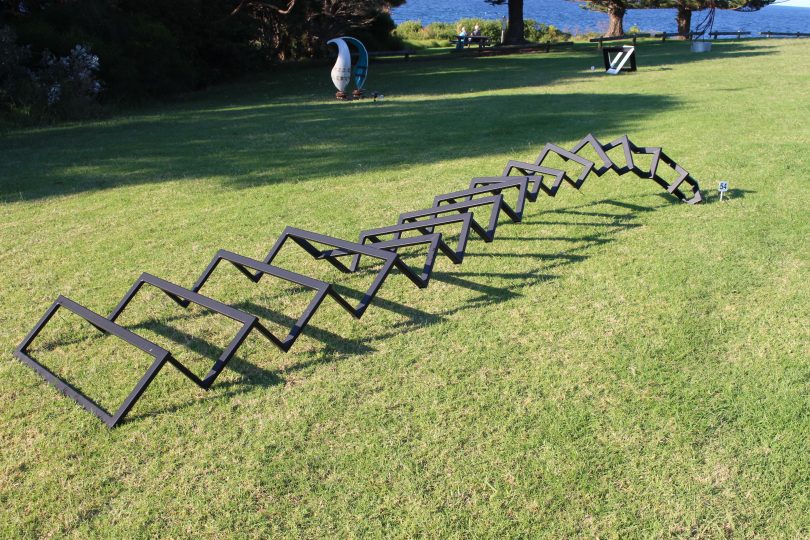 “A transition from two dimensional to three-dimensional space where a familiar object is placed in an unconventional way,” Alexandra explains. 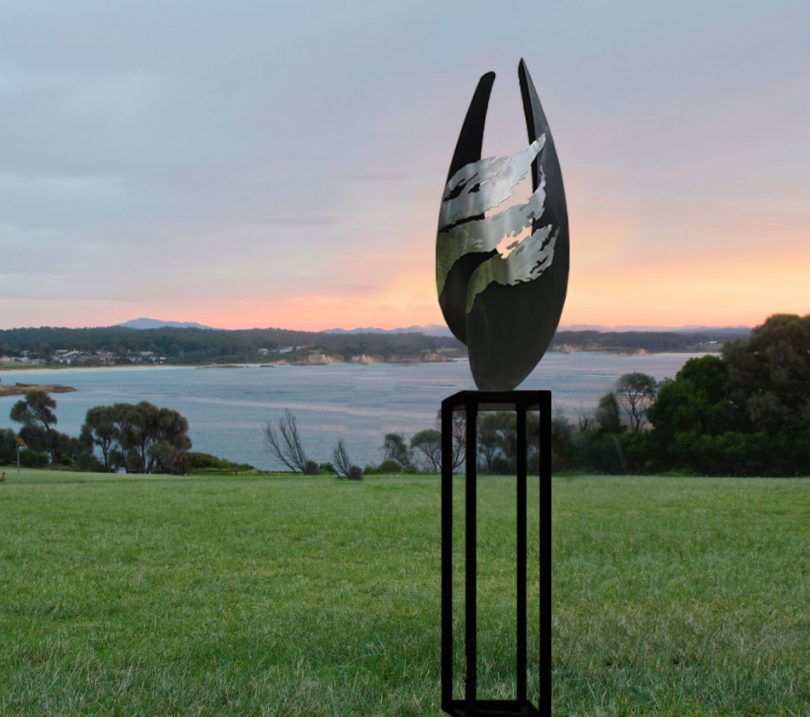 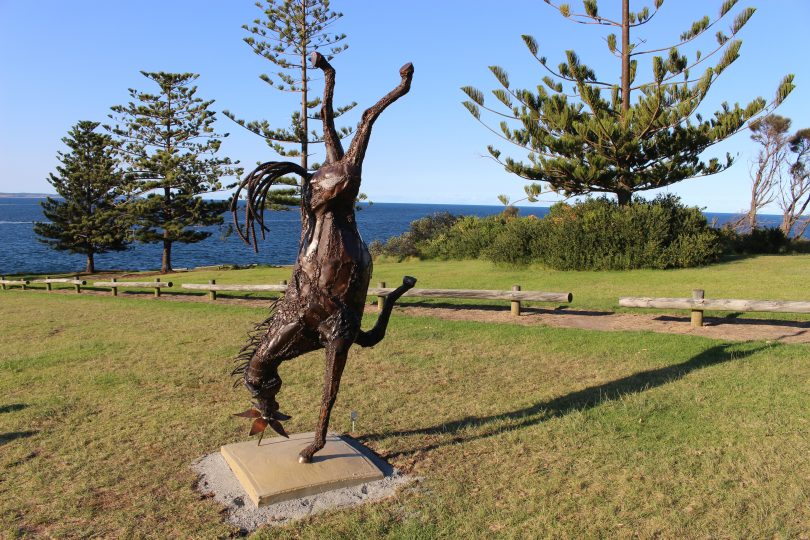 Not sure this photo does Jesse’s work justice – standing 3 metres tall, this horse of copper, steel, and bronze is enjoying one of nature’s other creations. 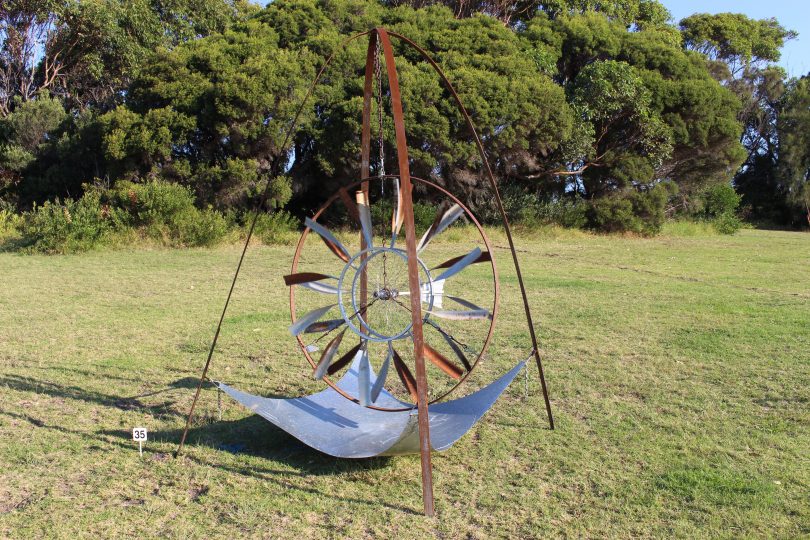 Wind Works and it’s opposing wind wheels is well placed to catch the passing sea breeze and spins with mesmerizing precision. See it for yourself. 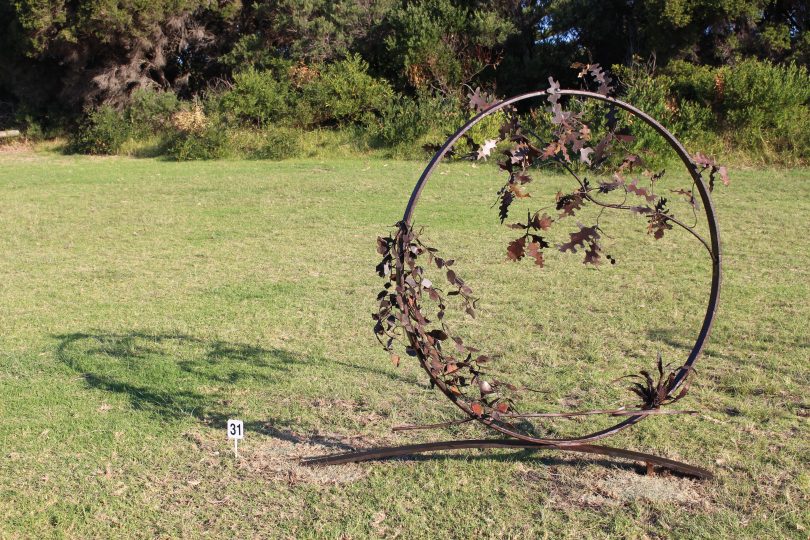 After studying Japanese screen art (Byobu) Stephen has transferred his skill to this garden screen. 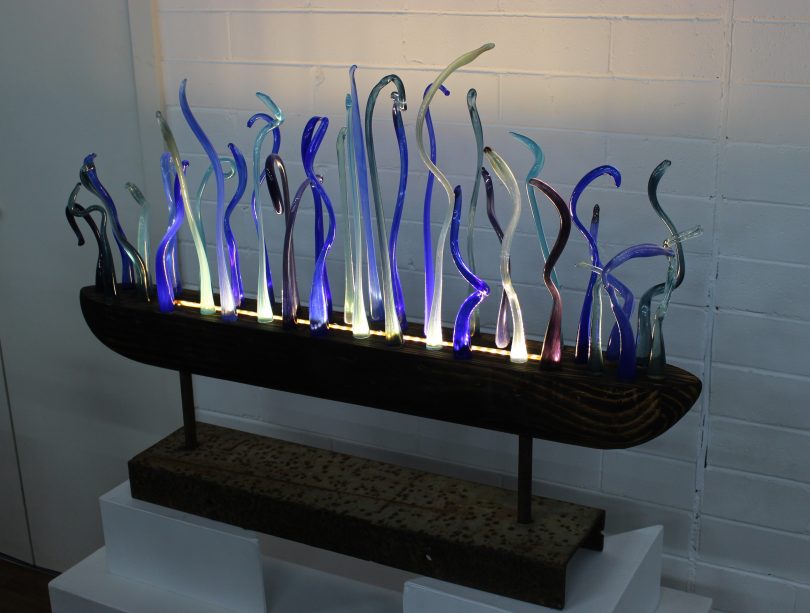 After being swept along by the grandeur of the outdoor sculpture along the Bermagui foreshore and headland, it’s easy to think you have seen it all, no – head towards the Bermagui Community Centre.

Matthew Perry’s work has got to be a contender for the People’s Choice Award. Adorned with shells, Mathew says his surfboard, guitar, and suitcase become vehicles for dreams and stories of past and future. 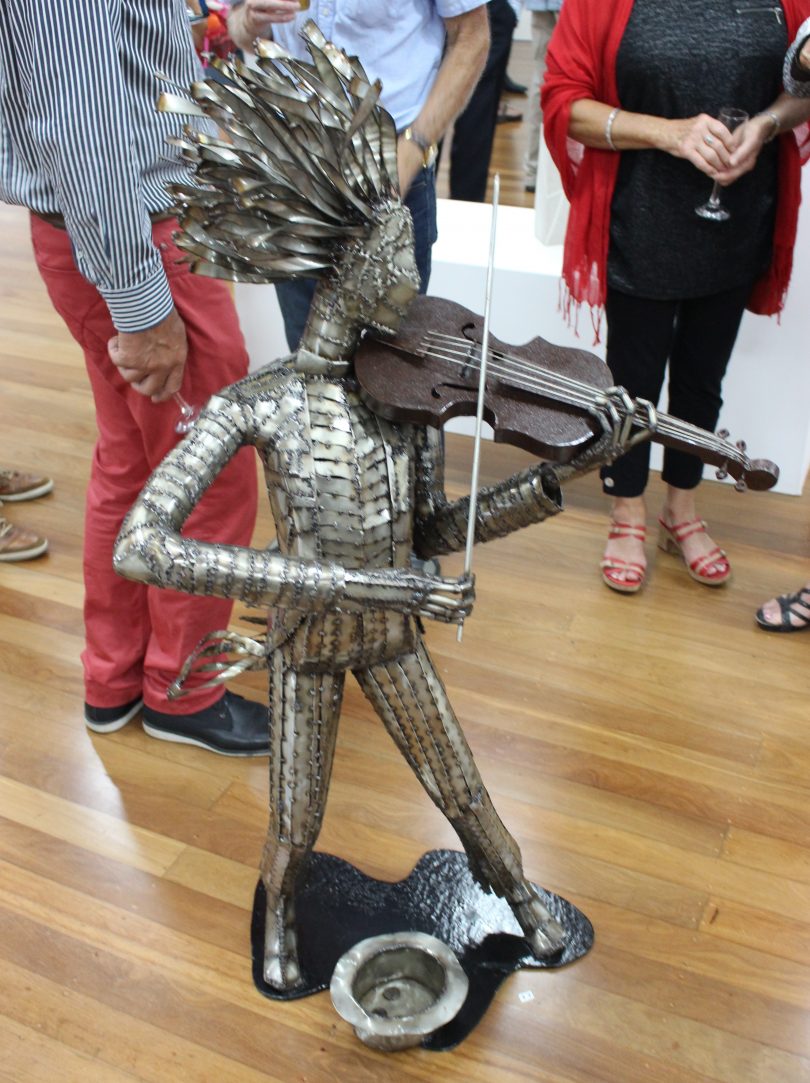 Paul’s busker is already a crowd favourite, “A bit ragged around the edges, but still playing beautiful music,” he says. 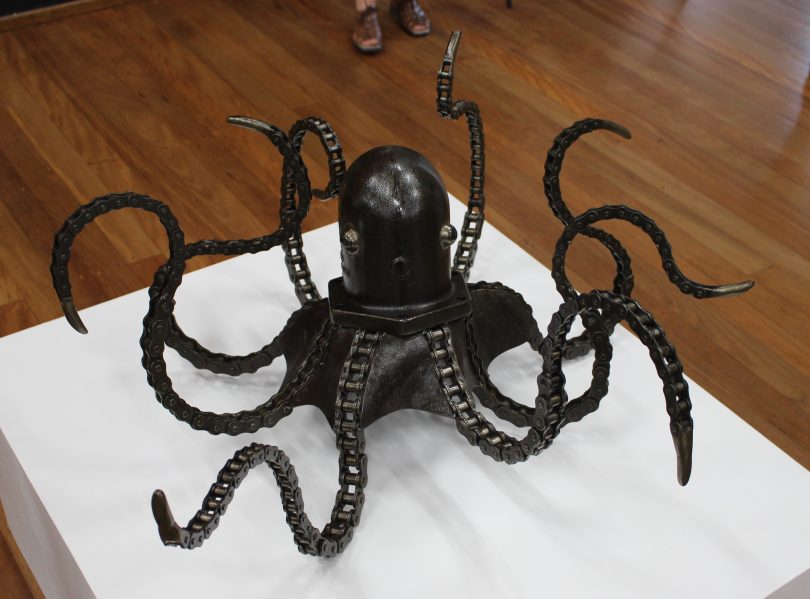 “My inspiration for Olly stemmed from a local octopus I witnessed gliding through the rock pool,” Jordan says.

“I wanted to represent its erratic and fluid movement through my piece.”

Sculpture Bermagui runs until Sunday, March 18. 110 sculptures on show, see them for yourself.

For the diary, Jindabyne’s Lake Light Sculpture exhibition runs over Easter – March 30 to April 2, and in Batemans Bay this spring, Sculpture on Clyde – August 25 to September 2.

Another lovely spot and the sculptures were good too

Bugger. We will miss it

I beg to differ. The water is freezing but the sculptures are excellent!

The front deck of the pub is the perfect place to take in Sculpture Bermagui. Enjoy! Ian

Treena Loiterton - 32 minutes ago
Geoff Richardson what about dumping every single record about war/defence on the steps of the memorial and getting them to ke... View
Richard Grainger - 4 hours ago
That building is simply storage. The cost that the Archives desperately need funding for is to digitise the records. A lot of... View
News 64

Ray Ez - 1 hour ago
Tiger Fit so no memorials for anyone?? Did you think that maybe this sort of thing helps a lot of veterans? View
Ray Ez - 1 hour ago
Ian Pearson you do understand the consultation was not a vote? They asked for people’s opinions. They are under no obligati... View
Ian Pearson - 1 hour ago
Concur - while Stalin might have said that numbers have a quality of their own, presumably the NCA did not agree. View
Business 1

Your perfect sea-change property in Bermagui