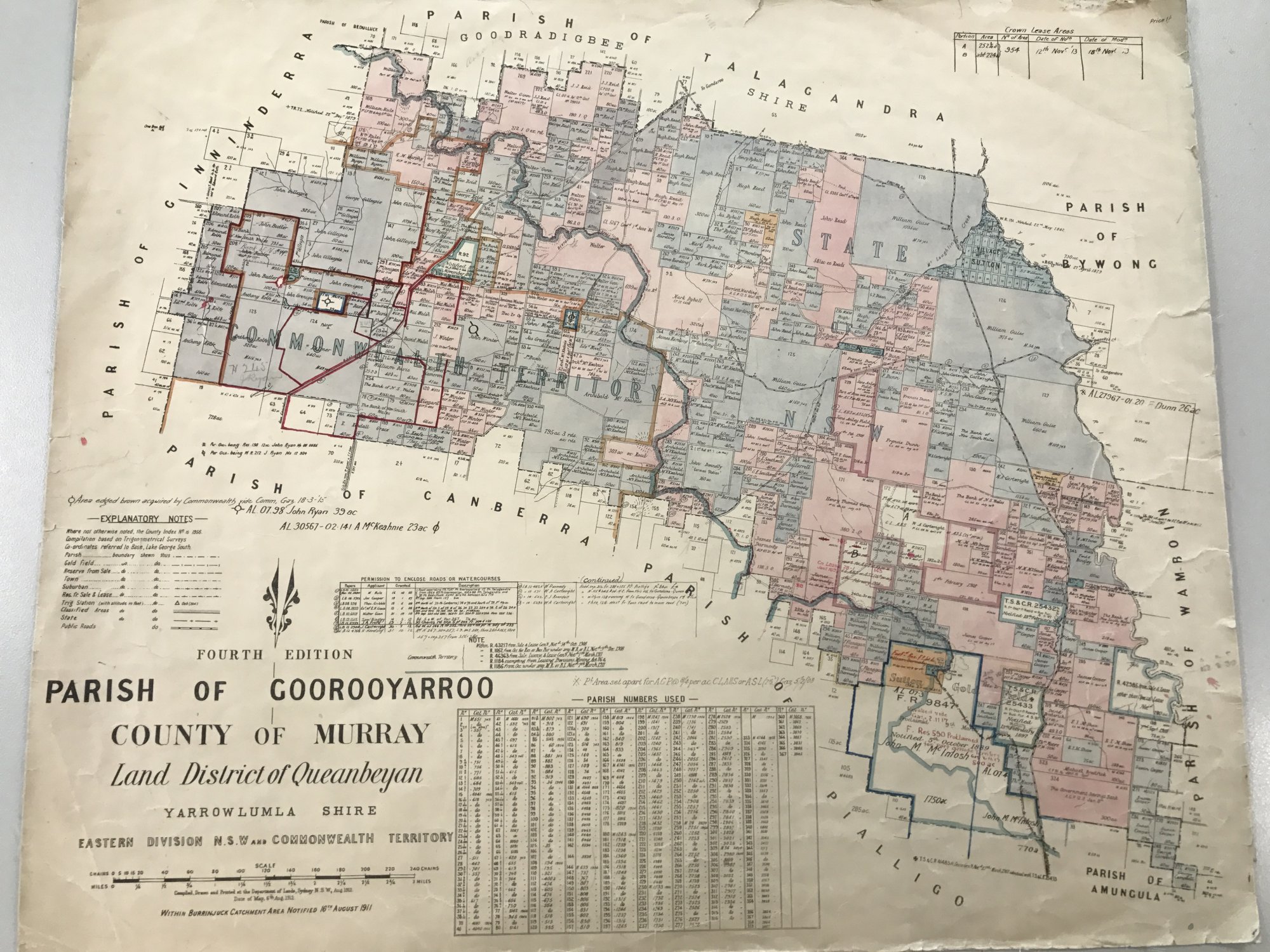 Did you know there was once a cricket pitch where Lake Burley Griffin is today? Or that several Canberra suburbs have been named after early landholders?

These are among the insights revealed by a series of maps dating back to the 1800s which have been added to the ACT Government’s mapping service, ACTmapi.

ACT Minister for Environment and Heritage Mick Gentleman said the addition of the old maps will allow Canberrans to see what the ACT and surrounding region once looked like with just the click of a mouse.

“These maps will be invaluable to anyone with an interest in the history of where they live or a place they know and how it has changed over time,” Mr Gentleman said.

“The historic maps have been scanned and processed so you can overlay them onto aerial photography of the ACT as it appears today to get a comparison of land use and tenure.

“The maps date back to the 1800s and show the sheer size of land holdings of the time, which often consisted of a number of land portions.”

Mr Gentleman said that a group of land portions used to make up a locality, which was called a parish.

“The portion plans show specific details about the layout of buildings and environmental features on the parcels,” he said.

“Where Gungahlin and Goorooyaroo nature reserve stand today, there used to be the parish of Goorooyaroo, where Mulligans Flat School existed and Old Coach Road went through to Bungendore.” (See photo of map above).

Mr Gentleman said that the ACTmapi online tool also shows maps from 1830 to 1930 revealing settlements and rural pastoral boundaries. These maps also highlight the historic location of cottages and huts, as well as where bushland was cleared and fences were built.

“The 1915-1930 map series even shows a cricket pitch which is now under Lake Burley Griffin,” Mr Gentleman said.

“These maps give a fascinating insight into the history of land ownership in the region. Users will quickly recognise that the names of many of the early landholders and localities, such as Campbell, Crace, Weetangera and Weston, are now recognised with places in Canberra named after them.

“The maps also reveal details of old homesteads and cottages which in many cases have been lost to time,” he said.

“An example is Old Lands End in the parish of Weetangera. The portion plan from 5 September 1871 shows such detail as a garden and hut on the block but now when you zoom into today’s aerial photography all that exists is rubble and a few trees.

“The maps and data made available today will complement existing databases on ACTmapi, such as the Territory Plan, heritage, vegetation and registered trees map overlays to support decision making by planners, land managers, researchers and members of the community.”

To find out more or access maps of interest please go to www.actmapi.act.gov.au and click on ‘historic plans’. 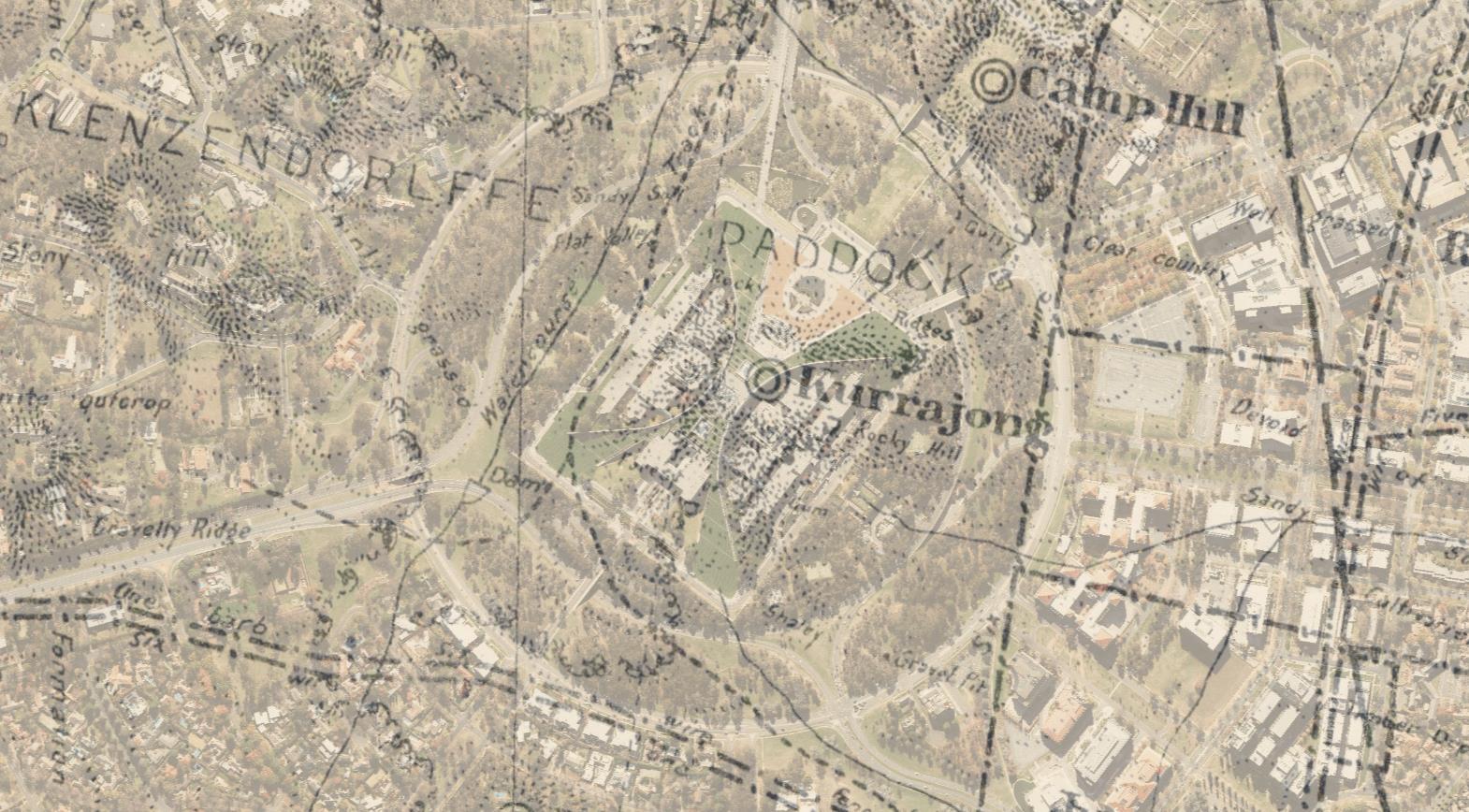 Top photo: A 1912 map of the parish of Goorooyaroo, showing where Mulligans Flat School once existed and the Old Coach Road going through to Bungendore. This is where Gungahlin and Goorooyaroo nature reserve are currently located.

Photo above: This map shows the area where Parliament House now stands as it looked back in the 1830s. The detail on the old map shows the location of barbed-wire farm fences that once ran through the area, as well as an old track that ran around Parliament house. The map is overlaid (the see through quality of it) with a modern map of the area. Photos supplied.

I love maps! This is a great online resource. Thanks for sharing this Glynis! 🙂

Daniel Bryan - 4 hours ago
This, Oaks, A+A, Grand Central, Ivy, and Trilogy definitely bringing more residents into the Woden valley isn't a bad thing.... View
Michael Jayfox - 5 hours ago
Mat Barber please explain how you think that new parking ramps will stop it from being an eyesore View
Tristan Wellens - 5 hours ago
Will only rent for about $500 a week per smaller unit 👌🏻 View
Food & Wine 4

Josh van Limbeek - 8 hours ago
What a great article! My Mum is a Red Hatter and she has so much fun too ❤❤ View
Jo Jo Joey - 9 hours ago
Barbara Bennett, I love how much enjoyment your ‘red hatters’ gives you’ 🎈💜❤️💜 View
Property 27

Elroy Jones - 8 hours ago
Peter Bee there are a lot of places it could go. Majura the most recent I’ve heard. View
Christopher Cuba Rabanal - 8 hours ago
Better lighting around the carpark View
Andy Sell - 9 hours ago
2 words mate, lite rail View
News 17

Mookie Moo - 9 hours ago
Assuming this means 80% by Oct within the adult population only? Because roughly 20% of the population would still be kids, w... View
Community 35

Theresa Rowan - 10 hours ago
Margaret Smith was in my class at St Clare's a gentle soul RIP. View
show more show less
*Results are based on activity within last 7 days

@The_RiotACT @The_RiotACT
Michelle Heyman's stunning return to football began with a simple question on Instagram: “Hands up if I should make a comeback to the W-League?" https://t.co/UNn8rDWuj3 (8 hours ago)

@The_RiotACT @The_RiotACT
The 2021 Australian of the Year is Grace Tame. Grace is an outspoken advocate for survivors of sexual assault, particularly those abused in institutional settings https://t.co/Q6nMb1PGRL (8 hours ago)

@The_RiotACT @The_RiotACT
Times have been ruff, so @QTCanberra has rolled out the pet-friendly red carpet & opened its doors to allow furry best friends in their luxury hotel rooms https://t.co/V89hSF18w9 (9 hours ago)