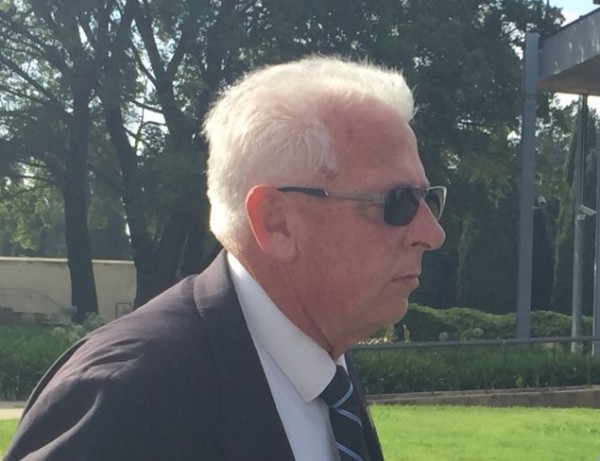 Former ACT schoolteacher and ASIC regional commissioner for the ACT Peter Cuzner, of Kaleen, pleaded not guilty in court today to charges relating to the alleged abuse of a teenage boy in the 1980s.

Earlier this week RiotACT reported that a 60-year-old Kaleen man would today face three charges of acts of indecency on a person under 16 years of age. The Canberran and three other men, all of NSW, were due to appear in the ACT Magistrates Court this week following reports of historic sexual abuse investigated under Operation Attest.

ACT Policing established the operation to investigate allegations of historical sexual abuse at institutions within the ACT. 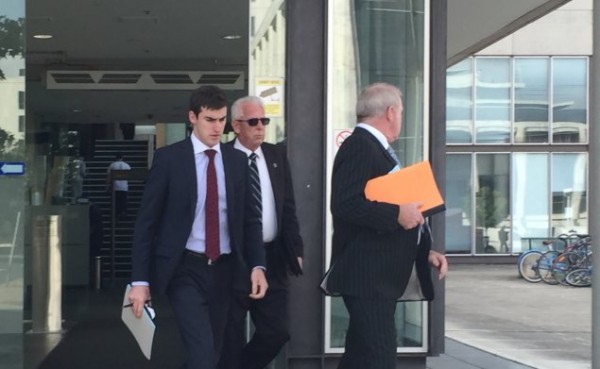 The Canberra Times reported this morning that Cuzner (pictured top and above centre leaving the ACT Magistrates Court at around 9.20am today) pleaded not guilty this morning to three acts of indecency against a 14-year-old boy in 1986; that he was stood down from his ASIC position once the organization learnt of the charges late last month; and that he taught at both Marist and Daramalan Colleges during this teaching career, though it was not known where he was working at the time of the alleged offences.

Liberal senator Bill Heffernan has used parliamentary privilege to accuse an unnamed former prime minister of being an alleged paedophile, while also pointing the finger at the judiciary.

Look for the metadata: which politicians, lawyers, “senior judiciary” and senior bureaucrats hate Margaret Cunneen the most…?

Those who abuse children are destroyers of generations of kids. How many of these kids would have grown up to invent something, cure something, do something great, but instead they were destroyed by such abuse, and then covered up by all sorts of people in various levels of power, that were tasked in protecting children.

The amount of hysterics by the corporate media about refugee children, but yet they are silent on this issue, a true disgrace

What Senator Heffernan said under parliamentary privilege rings true, and the corporate media run the story for half a day:-

Liberal senator Bill Heffernan has used parliamentary privilege to accuse an unnamed former prime minister of being an alleged paedophile, while also pointing the finger at the judiciary.

Kay Pearce - 22 minutes ago
Mrs Prowse was my grandmother and I can well believe she would walk to Manuka… well into her seventies and early eighties s... View
Kay Pearce - 1 hour ago
Helen Kook thats just what Grandma (Mrs Prowse) would do!!... View
Helen Kook - 3 hours ago
Knowing my grandmother it would have been an easy walk back in those days View
Community 48

Zuzette Kruger-Finch - 45 minutes ago
Summernats and Floriade are our big income events here. View
Alan Vogt - 57 minutes ago
No. Maybe in another 20 Years. View
Vanda Catanzariti - 59 minutes ago
Yes... lets do this! 🏆 🏁 View
News 22

TimboinOz - 4 hours ago
SUVs are popular because they fill a lot of needs. We are very happy with our 2015 2.5L Subaru Forester. I've only once manag... View
Graeme Tyers - 4 hours ago
James Forge will be interesting to see the next gen. 3lt petrol or diesel, RWD (potentially AWD) and a hybrid option... View
show more show less
*Results are based on activity within last 7 days