Sense and Sensibility stage play: It’s Austen, but not as you know it! 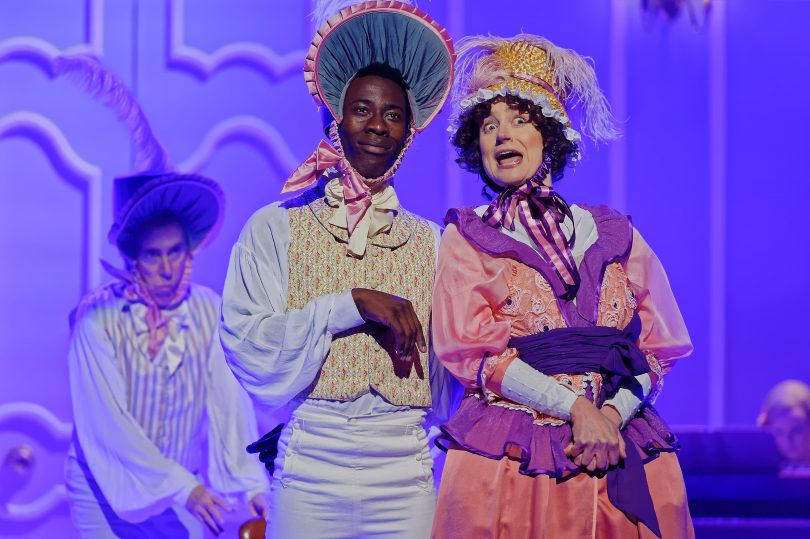 Mention the name ‘Jane Austen’ and for most people, it instantly invokes images of her well-loved period novels and subsequent movie adaptations featuring feisty female leads, romance and the beautiful English countryside.

The State Theatre Company South Australia’s return to Canberra Theatre Centre with Kate Hamill’s anarchically funny adaptation of the classic, Sense and Sensibility, in the Playhouse from 29th May is set to shake up everything we know and associate with Jane Austen.

Said to be gloriously oddball and a fun whirlwind of words, this high-octane Jane Austen version is described as ‘the greatest stage adaptation of this novel in history’. New York-based playwright Kate Hamill’s sparkling interpretation of Sense and Sensibility is described as ‘Jane Austen on theatrical steroids’. Austen’s masterpiece is a precision-guided literary missile of wit and warmth, and, in playwright Kate Hamill, she’s found her theatrical match, as verve and invention is brought to bear on the Dashwoods’ every move.

The newly widowed Mrs Dashwood, under much-reduced circumstances, must move herself and her three daughters, the very sensible Elinor; the wild, romantic Marianne and the spirited Margaret, from their grand family home to a modest cottage. But, reduced social circumstances do not lead to a reduction in troubles of the heart. Suitors circle and gossip swirls as all of the Dashwoods try to find their place in the world.

Artistic director Geordie Brookman says, “In the collision of Jane Austen and American actor/playwright Kate Hamill, we’ve found a piece that provides a limitless landscape for comedic invention while digging into the heart and soul of one of the Western canon’s great works.”

Ahead of the production’s season in Canberra, we spoke to Congolese born actor Rashidi Edward, who plays the dashing suitor John Willoughby, about his character, the play and his plans for visiting the capital.

Rashidi said “In Sense and Sensibility I portray John Willoughby, who’s described as handsome by the other characters in the play. He’s charming, very confident, very smooth, and a big-time player.”

“When we first meet him, he is to inherit his cousin’s estate and fortune. So in a way, he’s wealthy, but when he’s disinherited he does anything and everything to be rich, which he believes will determine his happiness. I really like the fact that he doesn’t give up on his goal! I don’t fancy his deceitful nature and his selfishness (though I understand that we are all selfish at times in our own ways).”

As for what audiences can expect from this telling of the story, he revealed, “They can expect a thrilling, very fast-paced comedy. It’s hilarious, but also a very touching love story between the sisters AND their significant others as well.”

His favourite scene from the production, Rashidi shared is: “I think it would be the introduction of Willoughby. I love how he storms in carrying Marianne in his arms like this romantic hero. Love it!”

As a first time visitor to the city, he said: “I’m looking forward to seeing Parliament House and everything that Canberra has to offer.”

To see everything Sense and Sensibility has to offer from the 29 May – 2 June 2018, visit the Canberra Theatre Centre website.

Haziq Saleem Deen - 2 hours ago
Best in town ❤️ View
purplevh - 3 hours ago
One of the best budget friendly feeds in Canberra. Well worth the ~30km drive for me.... View
David Cole - 4 hours ago
I’ve been looking , just can’t find it View
Sport 6

Jay Annabel - 3 hours ago
If the emus don't mind travelling, why not? View
Matt Fallon - 5 hours ago
Dunx Fallon i rckn both View
Dunx Fallon - 6 hours ago
Why not just bolster the clubs we have here. There are clubs struggling and could become really competitive with a merger. View
Opinion 18

Futureproof - 5 hours ago
Wouldn't need such a large budget if the Greens weren't so keen on ripping out trees for trams View
nobody - 8 hours ago
Wow, $260 per tree. Also, this is 18,000 trees a year, so how does this compare to previous years, and do they meet target? View
Community 1

Tom Worthington - 6 hours ago
The ACT Library ‘mystery boxes’ look a good idea. However, I was confused by the eligibility requirement "unable to acces... View
News 29

Peter Dark - 9 hours ago
Go the birds! View
show more show less
*Results are based on activity within last 7 days

@The_RiotACT @The_RiotACT
An incredible phenomenon in the heart of Belconnen, the '#Pink Lake' in #Bruce is now in full bloom. But what gives Canberra's hidden natural gem its dazzling colour? https://t.co/0L5c69vbOo (1 hour ago)

@The_RiotACT @The_RiotACT
Submissions are open for the @AWMemorial's Napier Waller Art Prize, a competition which allows veterans and Defence Force personnel to communicate through art https://t.co/vXbZJzF69n (2 hours ago)