Seven things to do around Canberra this weekend (1–3 June) 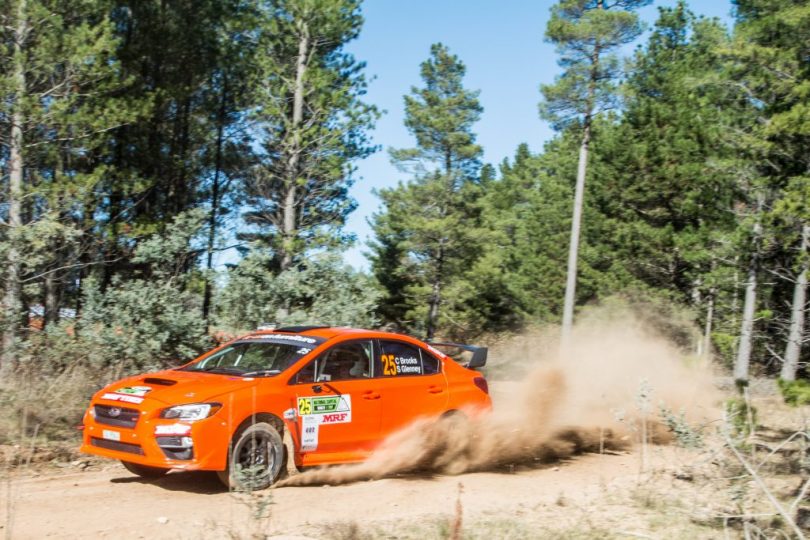 Garema Place, Pialligo Estate and Canberra’s theatres are the focus for this weekend’s events. The National Capital Rally is holding its ceremonial start this Friday evening in Garema Place and its Service Park will be at Pialligo Estate, but the real action will be out in the forests either side of Canberra — Kowen Forest on Saturday and the Cotter on Sunday. The Hurley Burly Winter Fair will take over Garema Place on Saturday afternoon and well into the night, helping you to celebrate the arrival of winter. And Pialligo Estate is hosting its Farm Gate markets this Sunday morning. The Street Theatre’s latest production, The Diary of a Madman opens this Saturday and you can catch Sense and Sensibility all weekend or book your kids into a coding workshop this Saturday morning at the Canberra Theatre. Finish your weekend by taking your family to the rugby on Sunday afternoon. The Brumbies take on the Sunwolves and to encourage you to attend, the Brumbies will donate $15,000 to three local charities if 15,000 fans attend the game. No matter the outcome of the game that sounds like a win.

Where: Various locations
When: Friday, Saturday & Sunday
The National Capital Rally is on this weekend and it kicks off Friday in Garema Place at 4 pm with an opportunity to meet the drivers, check out the cars and then watch them go through the ceremonial arch. On Saturday the race heads to Kowen Forest where the Kennards Hire Rally Village will be set up to support spectators with food, activities and atmosphere. You’ll be able to see the cars tackle the Kowen Jump and some tight bends. The first cars will come through at 1 pm. On Sunday the race heads to the Cotter. Check the map of the rally here. For more chances to meet the drivers head to the Service Park at Pialligo Estate between 11:30 am – 1:30 pm and 4 – 5 pm Saturday and 11 am – 1 pm Sunday.

Where: Canberra Theatre
When: Friday 8 pm & Saturday 2 & 8 pm
The State Theatre Company South Australia is bringing its production of Jane Austen’s Sense and Sensibility to Canberra this weekend. Adapted by American playwright Kate Hamill, this production has been described as Jane Austen on theatrical steroids with kazoos, tricycles, ukuleles, Empire lines and melodrama. 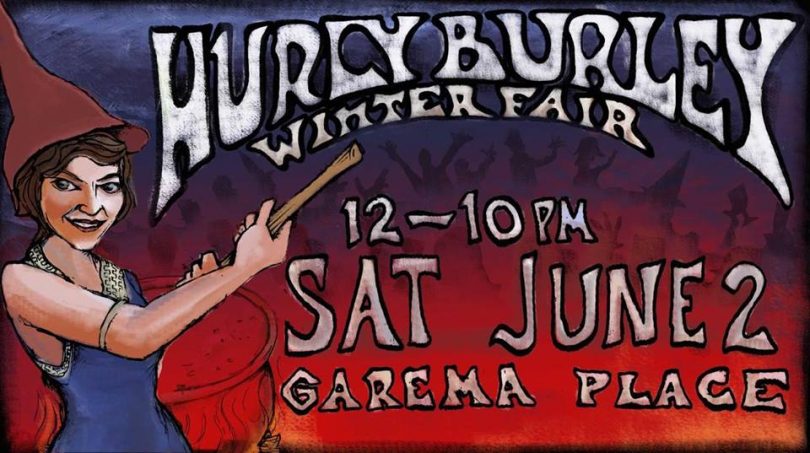 Where: Garema Place
When: 12 – 10 pm
Celebrate the start of winter this Saturday in Garema Place by toasting marshmallows over a fire pit and taking a ride on the carousel. The Hurly Burley Winter Fair is back for another year with live music, comedy, storytelling, poetry recitals, roving performers, artistic projections, a pop-up choir and dance parties on the back of trucks! All the performers will be local, including local bands The Brass Knuckle Brass Band, Guyy and the Fox, The Barren Spinsters and a musical collaboration not to be missed between Chris Endrey and Nick Delatovic which they are calling Hot and Powerful. For the kids there will be loads of activities in an area created for them by North Ainslie Primary School and Mr Tim and the Fuzzy Elbows will be performing. There will also be market stalls, food and a bar. Find the full program here. The Hurly Burley Fair is produced by Little Dove Theatre Art.

The Diary of a Madman

Where: The Street Theatre
When: 7:30 pm
The Street Theatre’s latest production, Nikolai Gogol’s Diary of a Madman opens this Saturday night and will run until 16 June. This 19th-century Russian play tells the story of Poprishchin, a low-ranking public servant who is yearning to be noticed by Sophia, the beautiful daughter of a senior administrator. He battles snobbery, complacency and the stupidity of officialdom until one day the King of Spain dies without an heir and destiny calls! It is a funny and brutal exploration of one man’s struggle to keep a grip on reality and find his place in the world. Adapted by David Holman, this production is directed by Caroline Stacey and stars PJ Williams and Lily Constantine.

Bot Workshop—Coding as the new literacy

Where: Canberra Theatre
When: 9 & 11 am
There are a couple of coding and robotic workshops for kids on this Sunday morning at the Canberra Theatre. Presented by Professor Chris Walsh from Victoria University Online, these workshops will be interactive and hands-on, giving kids the opportunity to learn how to code through play. Tickets are $15, book here, kids aged from 3 to 5 years old need to be accompanied by an adult.

Where: Pialligo Estate
When: 10 am – 3 pm
As well as the National Capital Rally, Pialligo Estate is hosting its Farm Gate Markets this Sunday. There will be a range of local stallholders showcasing gourmet food, wine and spirits, and live music. 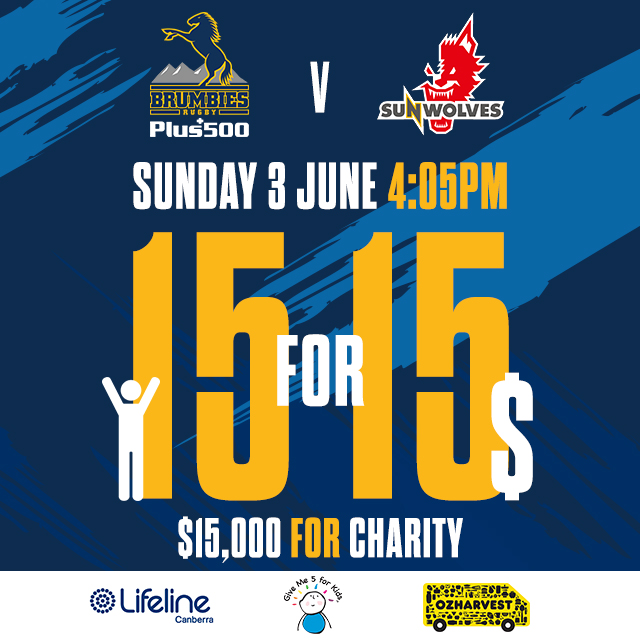 Where: GIO Stadium
When: Gates open at 1:50 pm, kick off at 4 pm
The Brumbies are playing the Sunwolves at home this Sunday, and with an early 4 pm kick-off the game, it is an ideal family event. There will be plenty of pre-game entertainment with giveaways, face painting, a Junior Rugby Club march past, a photo booth, the Brumbies Autograph Alley and the Brumbies Primary School Rugby Championships being played on the field from 2 pm. And for an added incentive for you to join in the fun, by simply turning up you could be helping three local charities—OzHarvest, Lifeline Canberra and Give Me 5 for Kids. The Brumbies will donate $15,000 to these charities if 15,000 fans turn up to the game! A great incentive! Book your tickets here.

Margaret Edwards - 33 minutes ago
Lynda-Maree Morgan I have enjoyed having candidates knocking on my door. It has allowed me to discuss policies and to make su... View
SP Brogues - 14 hours ago
All that landfill View
Property 3

Patrick Harrington - 1 hour ago
Dannii Harrington this one? View
Susan Anderson - 2 hours ago
Fiona maybe I could do this one! View
Julien Lefebvre - 3 hours ago
Rod Irvine your house mate View
News 57

Mac John - 3 hours ago
Election matters: Challenge to Candidates: How about limiting the number of terms to two and get fresh (first time) candidate... View
Colin Vivian - 12 hours ago
Anyone over 50. Letting contracts to remove trees in Parkland before public consultation was held then announcing works six m... View
Robyn Holder - 15 hours ago
Steve Wood and there you go with the rightwing thinking of how to disenfranchise people. Congratulations. View
Community 1

Alecia Bee - 8 hours ago
C'mon Canberra! Someone must be able to help these wonderful people! View
ACT Election 73

George Watling - 12 hours ago
Bill Gemmell Very witty 🙂. A chance find of the yellow stuff would be good for the current government it would save them a... View
HiddenDragon - 15 hours ago
The 2019-20 Budget Review released in February showed net Territory debt of $5bn by the end of that financial year - so even... View
Julie Macklin - 15 hours ago
Colin Vivian, The bridge replacement was a suggestion from the Federal government, not local. Now it's not to be replaced, bu... View
Property 14

Shaun Claypole - 16 hours ago
Jessica Botterill I just saw this We are in... View
show more show less
*Results are based on activity within last 7 days

A network of more than 150 km of mountain bike trails near Mogo will be a game-changer for the South...
News 39

Canberrans won't be catching the buses from an underground city interchange after the idea was canned due to the cost....
ACT Election 58

The indicators are all there: an abundance of corflutes on the roadside, piles of political flyers in your letterbox, being...
ACT Election 38

One day a week of free early learning for three-year-olds and 400 more teachers and support staff for ACT public...
News 39

@The_RiotACT @The_RiotACT
Canberra's legal graffiti sites is a success story that keeps on growing. Three more sites have been added, making 30 across the ACT. Find out where the new locations are https://t.co/Yqzb3bRn3n (15 minutes ago)

@The_RiotACT @The_RiotACT
Canberra's much-loved GG's Flowers has to move and needs a new home for their blooming social enterprise. Can you help them find a new place to blossom? https://t.co/oH67IWg4dc (13 hours ago)