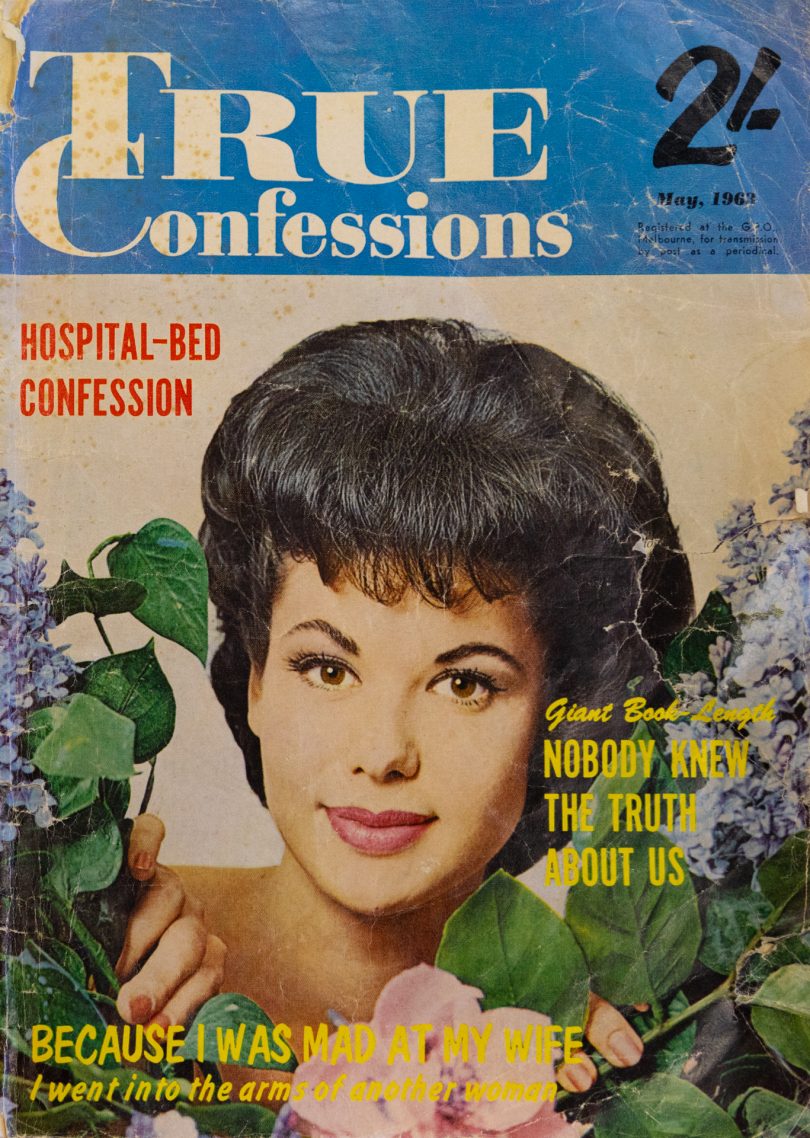 It’s True Confessions time. I just read it for the ads. Well, maybe some of the stories, but I definitely don’t look at the pictures.

Remember True Confessions magazine? It was the magazine in its day. OK, so the day/year for this magazine we found was 1963, and it was full of handsome men with shiny hair mostly called Gustavo and women who said things like, “You can just about forget differences in days of the month. Goodness knows, I do”, when advertising a particular sanitary product.

It starts, sensibly, with the cover. You literally can’t go past its alluring cover lines like, ‘Because I was mad at my wife I went into the arms of another woman’, or ‘Nobody knew the truth about us’ and what would True Confessions be without a story titled, ‘Hospital-bed confession’? Probably another magazine.

The second best bit is the Index, because it goes into a little more detail. Like Page 32, for example, there’s a delicious yarn titled, ‘Nobody loves a fat man – a true confession in pictures’, followed by, on Page 38, something that could well be related, ‘My strange obsession’. 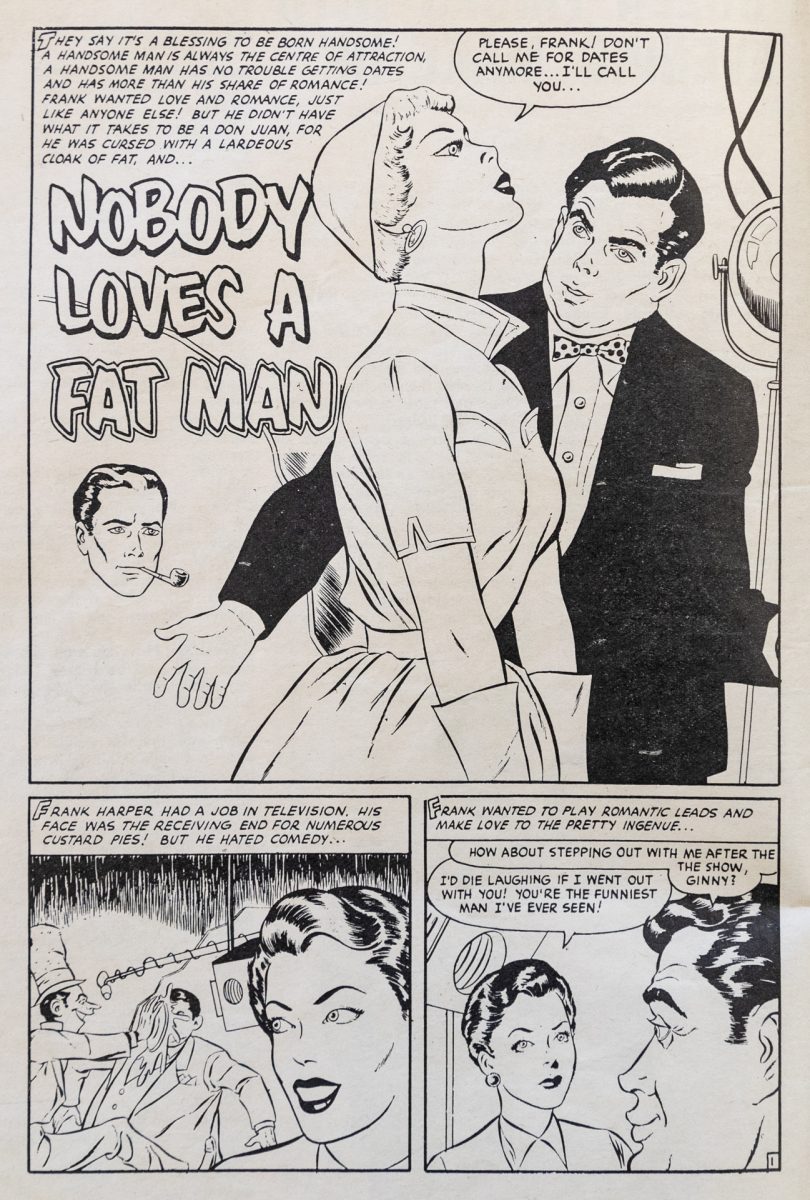 These magazines sold like, well, really popular magazines in their day.

Yes, the stories were pure escapism, but if you spent your days waiting for your husband to come home, only to be interrupted by blasts from the vacuum cleaner or offers of a lifetime from door-to-door Encyclopaedia Britannica salesmen, they weren’t half-bad.

Then there were the ads.

‘Bedwetting stopped – without drugs, without punishment’ but by using a worrying ‘new imported appliance’. Or U-KIRIMI could develop your bust ‘in one month or your money back’. ‘Wonderful new U-KIRIMI guarantees a perfectly proportioned figure easily … quickly … privately’.

Don’t fall off your chair in surprise, but it seems back in the 1960s women had a thing about their bodies, judging by the ads. They didn’t like them – their bodies, not the ads.

‘Reduce without drugs’, ‘A bathing belle or a beach wall flower – how will you look in a bathing suit this summer?’.

Then it goes into some scary details about which floppy bits you want to get rid of. Lots of cruel talk about “ungainly ankles” and even worse stuff about “bustline secrets of Hollywood stars”.

READ ALSO: What to do when you meat a vegetarian

Clearly, the editor of True Confessions believed in balanced journalism.

In between the love lost/regained/destroyed/reignited/how to lose your body weight in 60 seconds without really trying stories, there was The Real Thing. An exclusive by one Reverend Dr James Z. Nettinga, Executive Secretary, American Bible Society, entitled, ‘The most neglected book in the world’.

What book could he possibly mean? Brussels sprouts I’ve known and loved?

In case you’re in need of some spiritual guidance after reading this story this far, Dr Nettinga’s message was that the Bible was like a barometer in the home. 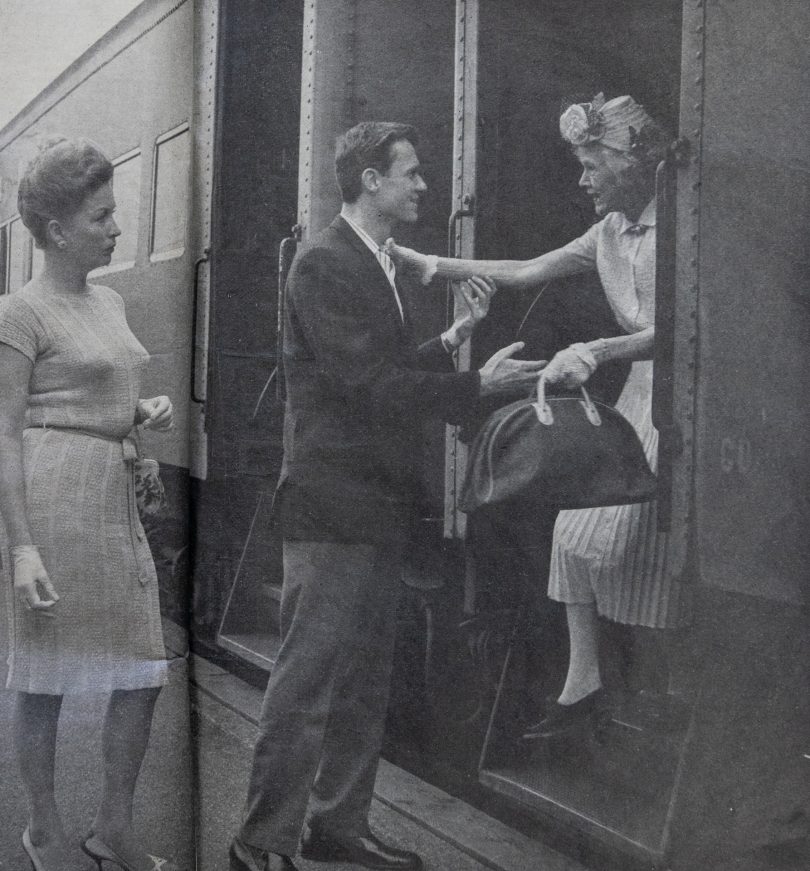 “If it’s in poor condition – its cover worn, its pages marked and soiled – I can be pretty sure that the spiritual climate of the home is warm and sunny. On the other hand, if the Bible looks new and it takes someone several minutes to find it, I can be pretty sure that the skies of the spirit are cloudy and dark and that the family has a special need for the ministry of the church.”

My favourite yarn would have to be the one titled, ‘Take her, she’s yours’.

A man called Stan, clearly a genius when it comes to understanding women, told his wife she would get along just fine when his mother came to visit. The best bit is the accompanying photo which shows Stan helping a woman who looks scarily like the dead Queen Mum, out of a train carriage while his wife, in an attractive knitted number, complete with gloves and matching shoes, glowers.

Wonder how that one will end?

Andrew Early - 16 minutes ago
Elaine Staples no Elaine…. Worst tree EVER. View
Lucy Doan - 18 minutes ago
Funny thing is that the planners never plant in their areas such as inner south or inner North, they plant these trees in poo... View
Steven Miller - 43 minutes ago
Lorraine Burford well that’s all an option! 🤣 View
Food & Wine 9

Vicky Myors - 17 minutes ago
So cute how you had chickens in the back if your ute View
Vicky Myors - 20 minutes ago
Paul I watched your show tonight for the first time .Very impressed you do a fab cook up . keep up the good work.I will be wa... View
News 45

Diane Tait - 26 minutes ago
Sue Danaher we have had this system for 7 years since we moved to Lake Macquarie. At this time of year we could do with two g... View
kenbehrens - 40 minutes ago
Those government claims also assigned a dollar value to the 30% food waste. When I calculated back the "average" weekly food... View
TimboinOz - 4 hours ago
We have two large grey-black recycled-plastic worm farms. Much less work than composting, no turning, effectively zero smells... View
Sport 2

Hillbilly - 29 minutes ago
Both firmly in the pantheon of the greats and both made huge contributions to Canberra. Best wishes to them. View
Community 96

Mick Brennan - 32 minutes ago
Kris Peralta diff events View
Katarina Vucic - 34 minutes ago
Just let people who enjoy to have it simple stop making world too safe let some steam out View
Scott Norman - 37 minutes ago
Toni Isaacson who is us? View
Lifestyle 7

thea - 45 minutes ago
We want more of Geoff’s work in ACT please! View
Rebecca Mosher - 2 hours ago
Such an amazing artist View
Lifestyle 30

Futureproof - 4 hours ago
I am in isolation for the second time in two months. Like the last time, I am not feeling the best. No RATs available, PCR dr... View
Sam Oak - 7 hours ago
At this point any advice about taking precautions and locking yourself up especially if you've already contracted and recover... View
Food & Wine 16

Why true romance, and women’s unmentionables, never get old

@the_riotact @The_RiotACT
The @acccgovau is investigating reports of #rapidantigentests being sold for "outrageous" prices. But #Canberra pharmacies say their big concern remains supply and they welcome the scrutiny https://t.co/OLkQPnSfWa (47 minutes ago)