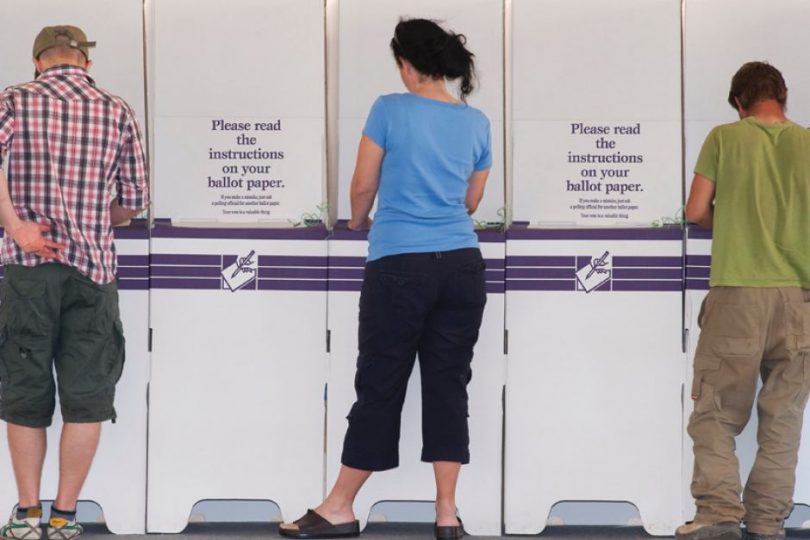 The ACT Legislative Assembly election is on 17 October. Photo: AEC.

A rural-based, populist political party that has defied the odds to establish a firm foothold in NSW state politics now has the ACT in its sights.

The Shooters, Fishers and Farmers Party has registered to be a political party in the ACT and is preparing to run candidates in the 17 October Legislative Assembly elections.

Founded in 1992 in response to the then-NSW premier Barry Unsworth’s plans to tighten gun laws, the party has broadened its appeal by tapping into general discontent in rural Australia about the loss of services and perceived neglect from the major political parties.

In NSW it has taken seats off the National Party and now has three lower house seats and two upper house ones. It also has one upper house seat in Victoria and Western Australia.

If the party’s application is approved, it will have branches in all states and territories. The ACT will be the last jurisdiction in which it will have a presence, although that has been more by chance than design, according to NSW State Director Filip Despotoski.

Mr Despotoski said the party was in the process of formulating specific ACT policies but voters should look to what it had done in NSW, Victoria and WA as a guide

He said the party had prospered due to a massive team effort, strong leaders, and a growing constituency and demographic, particularly in rural areas, who are sick of the major parties, ”particularly the National Party, who we think are just a rubber stamp and give the Liberals a free go at everything, and haven’t stuck up for the bush enough”, he said.

As examples, Mr Despotoski cites decisions on greyhound racing, council amalgamations, lack of spending in the bush, water policy, farmers’ rights and the lack of health infrastructure in the regions.

Mr Despotoski said NSW was governed by a self-serving Liberal-National Government that only cared about itself and its North Shore power base.

He said the party was much more than a libertarian, rural protest outfit.

”Only a few weeks ago we decided to vote to stop the public sector wage freeze [in NSW]. That has not much to do with shooting, fishing and farming but it was still, nonetheless, a very important policy decision, and there are a million and one examples of that over the past 25 years,” he said.

He did not think the ‘shooters’ tag would be a turn-off for ACT voters.

”We’re very proud to represent all law-abiding firearms owners,” Mr Despotoski said. ”We support changes to the gun laws in line with our policy.”

That policy does not support US-style gun laws but does back the right to protect family and home, and self-defence using firearms and the expansion of shooting ranges. It also wants tougher penalties for the illegal use of firearms and a permanent gun amnesty so people can surrender their weapons.

Probably not a high-order issue for ACT voters, but the party pitches itself as a group of non-politicians who argue that the main parties have let down their constituencies.

Mr Despotoski said the elected members were ”down-to-earth people, not politicians, which is probably why they are there”.

”We’re hoping that has been seen and that will be reflected across the ACT and Australia,” he said.

“We’re far off reaching our full potential. We’re still growing, still a minor party and we’ll make mistakes but we’ll learn from those, and never sell out our constituency or the people we purport to represent, which is a hell of a lot more than the major parties can say.”

Mr Despotoski said the party had not decided what to do about preferences in the ACT.

”People get caught up with preferencing like it’s the old days of parties in back-room deals. Now it’s a recommendation,” he said.

In the Eden-Monaro by-election, the party preferenced Labor’s Kristy McBain ahead of Liberal candidate Fiona Kotvojs and it may have been the deciding factor for the ALP. SFF Eden-Monaro candidate Matthew Stadtmiller received around 5.4 per cent of the primary vote; SFF NSW leader Robert Borsak told The Australian he estimated up to 60 per cent of Shooters preferences flowed to Ms McBain.

All current ACT politians are on the nose. Anyone else will attract the large a pox on all of you, up yours, protest vote that is coming.

After their allocation of preferences at the Eden/Monaro by-election I will be steering clear of this mob.

LDP all the way.

How many seats anywhere do they have? So where is your preference vote going to go? Give to Howard’s mates & see how any more changes to their great gun laws they bring in or give it to SFF for at least some voice against Greens/ Labor then wherever you like, it’s your choice on preferences.

David Ward my preferences will not be going to the major parties or the greens.

Sean Cryer they will eventually unless you don’t have to fill in all the numbers without making it an informal vote.
Definitely Greens last, unless the Animals Rights party is on the ticket.

Sean Cryer – you control your preferences, not the candidate or the party. The only time a party controls preferences is if you vote above the line on Senate or Upper House ballots. Then the party must have registered their preferences before the election & tell everyone what they are doing before a single vote has been cast.

Sean, we need to be smarter than that. People getting pissed off about the SFFP preferences are failing to understand that your preferences go where you put them. If you follow their recommendations (HTV card), it will give the SFFP the best chance of success – which isn’t always about winning the seat. This does not mean SFFP is wedded to Labor. In a different By-election they could do the opposite. It was about making a point to the NSW LNP. People holding a grudge over something they haven’t bothered to understand, are shooting themselves, and our pastimes, in the foot. A lot still don’t vote SFFP, and they could do a lot more for us if they had the support of all shooters. Too many people demand unrealistic results and demand SFFP perfectly represent all their own beliefs about gun laws. And think they are being reasonable saying stuff like “they don’t deserve my vote, what have they done for me? ” Remember the rules around preference voting have changed, the majors did that because minor parties were using them to their own advantage. SFFP is well aware that the ALP will screw shooters just as readily as the LNP will.

The thought of the SFF Party making a foray into oh-so-woke urbanised Canberra brings to mind the wonderful quip, by Fred Daly (I think), that when Eastern Suburbs apartment dweller Bill McMahon became Minister for Primary Industry in 1956, his qualifications for the job was ownership of a pot plant, a length of garden hose and a canary.

I can’t see the Shooters party having any effect on the ACT Election.

Their only chances of gaining votes outside of gun enthusiasts will be outer suburban voters who feel ignored and let down by both ACT Labor locally and Liberals federally.

There’s no way Andrew Barr will be seeking Shooters party preferences the way some of his federal colleagues have.

Completely agree bj. With close to zero rural community within Canberra (Some pockets here and there – but very small in the grand scheme of things), can’t see them getting many votes at all.

As long as they continue to preference Labor, fine with me