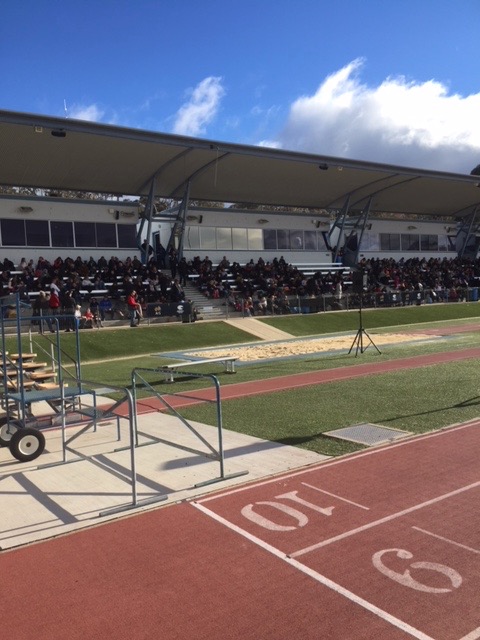 Opening ceremony for the Kanga Cup at the AIS. Photo: Tim Gavel.

This week Canberra is playing host to the biggest junior soccer tournament in the southern hemisphere, featuring 357 teams playing over 1,000 games across 10 venues.

The Kanga Cup brings an estimated 5.2 million dollars into the ACT economy over the week-long tournament. It is not an inexpensive event to run and organisers rely heavily on over 100 volunteers.

Organisers also rely on funding from the ACT Government through its tourism arm and Active Canberra.

There needs to be a rational discussion involving sporting bodies and the government to resolve what has become a simmering issue for a number of sports in Canberra that are looking to attract and stage events in the ACT. 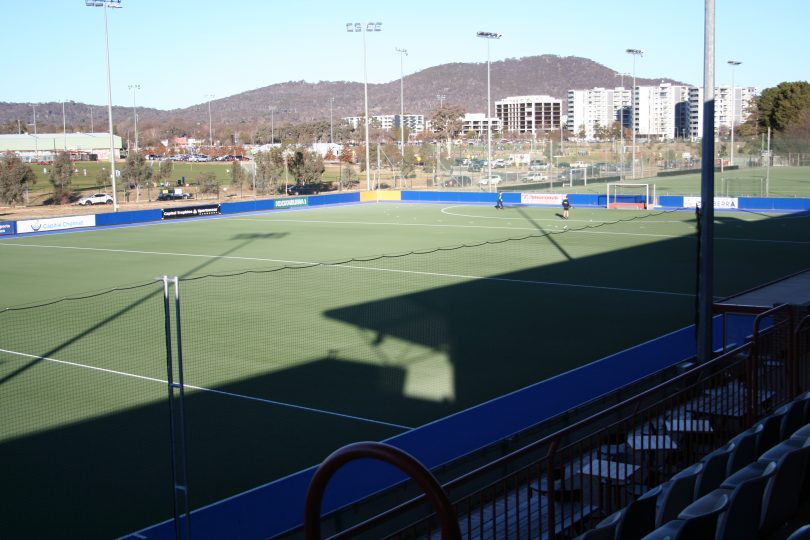 It became apparent, though, that there were significant hurdles if hockey was to receive government funding.

The government had a requirement that the funding had to be used entirely for marketing and promotion of the event outside Canberra. So, to be clear, the government funding allocated to hockey could not be used for the operating costs needed to run the tournament.

By all reports ACT Government officials did their best to work with Hockey ACT to work through the impasse but in the end, the event was cancelled. This was a blow to hockey regarded by many as one of the better run sports in the ACT.

If nothing else, it highlights a need for a change in policy when it comes to so-called second-tier sports.

By second-tier, I am talking about sports outside cricket, rugby league, rugby union, Socceroos and Matildas, golf and AFL. For events such as the test cricket at Manuka, the government enters a bidding process. It is the same for the Rugby League and Rugby Union World Cups, the Australian Ladies’ Golf Open, the Asian Soccer Cup and soccer internationals.

Second-tier sports seeking government funding through Tourism to attract major events are in competition with the likes of Floriade.

It’s a no-brainer to provide funding for an iconic event like Floriade, which runs over a month and brings in around 40 million dollars to the Canberra economy.

The question I have is why sport should be competing with Floriade for government funding through Events ACT in the first place.

Events such as the Trans Tasman tournament should not be judged simply on how many visitors it attracts to Canberra. What about the aspirational pathway events, such as this, that provide young players inspiration by seeing their idols play?

There are several other factors at play here.

The ACT Government’s National League Team Program funding pool for sports in Canberra is the lowest it has been for some time with more sports than ever involved in national competitions. There is also less discretionary funding for events within the ACT budget. We are a smaller city than most and therefore have less funding available. Other cities are starting to allocate significant funding to attract major sporting events.

A number of states also don’t require sporting organisations that are staging major events to spend the government money allocated for marketing; instead, it can be used for operational costs.

What we need in Canberra is a common-sense approach. Why are the requirements in Canberra more stringent than elsewhere?

Mass participation events such as the Kanga Cup are great for Canberra for many reasons. However, there should also be space in the budget to stage major tournaments such as the Trans Tasman Hockey without the need to spend the allocation on marketing and tourism outside the ACT.

If it brings in so much money to the “ACT economy”, why doesn’t the ACT Chamber of Commerce fund it.
I’m sick and tired of people expecting the ACT governemnt (and therefore the taxpayer) to fund their pet projects – be it sport, art or any popular pastime.

Of course not. What next? Shall we go through the purses and bags of patients in Canberra’s poorly performing public hospitals whilst they’re receiving treatment that is markedly worse than NSW or VIC.

Please don’t give the government any new ideas on how to raise revenue.

“The question I have is why sport should be competing with Floriade for government funding through Events ACT in the first place.”

Bread and circuses – the tool of many a despot.

Give me a break, sports ??? the govt supports teams like the Boomers who trash talked the Philippines then blamed them for the fracas, it supports the Australian Cricket team that cheats, money to the ARL so clubs can cheat by going over the salary cap, how about tennis players who are petulant and tank, if you are not playing to the best of your ability thats cheating, how many more "Sports" cheat, Horse Racing, Greyhounds how about getting people to be real sports not reward people just for turning up, thats bullshit, we can be a great nation by playing the game not cheating our way through.

Yet there is still young Australian players having to play overseas or even other states because there aren’t competitions that are competitive enough in Canberra.

By far the biggest investment in Canberra sporting events by the ACT Government is the $700K they pay the NSW based GWS every time they play an AFL match in Canberra. The total amount committed is $23 million yet you have not mentioned it.

There is far too much money “invested” in sport by the ACT government.

Re-read the article. AFL is in the top tier. Just because you don’t like AFL doesn’t mean thousands of others aren’t enjoying it and choosing to spend their money on it. To borrow your logic – my area of Canberra will never be serviced by light rail, what a terrible BILLION dollar investment.

Is $23 million committed to the other “top tier” sports?
I’m glad you like AFL along with the other thousands (remember, hundreds of thousands of other Canberrans don’t care for it but still fund its presence here).

You have also raised the cost of the trolley folly which will be accessible to about 100,000 Canberrans only. Fair comment.

I agree the billion dollars to be spent on it is a terrible investment and in fact, if only one dollar was spent on it still would be a bad investment.

Buck Johno - 2 hours ago
From what I remember of night rider busses it was only over summer. View
PE TE - 11 hours ago
Sean Bishop but the Uber rapes have increased View
Kim Rumble-Kozjak - 21 hours ago
Jacqleequack it was all good fun until the two hour wait in the cab line, in stilettos, without a jacket in -2 🥶❄️ View
Property 28

George Frilingos - 8 hours ago
Angelina Mamatas are you still interested? Huge investment. We would need a great business plan, and with people not able to... View
Tiana Jai - 9 hours ago
Dave William got a spare 6mil? View
Kara Youngentob - 11 hours ago
Alison Procter, it depends on how many people interested. Ideally, somewhere in the 750k range. It’s 31 acres so it would b... View
News 30

Daniel Lesky - 8 hours ago
Jason Malcolm could be worse not like she needs to go to charnwood View
Lisa LaMaitre - 12 hours ago
No-one pays attention to crime in Canberra until it impacts them! We closed a Gungahlin based business over 10 years ago afte... View
Food & Wine 25

Lihuan Panda - 9 hours ago
from the conversations and interviews, I think some players chose not to turn up for the briefings and missed out on informat... View
Hugo Walker - 11 hours ago
Penny Ford But isn’t he rich, famous and self-entitled? Surely that should persuade the authorities to cave in to his tantr... View
Pia Kivela - 15 hours ago
Personally we are in a pandemic so we should not be having this tournament View
News 5

Colleen Alchin - 20 hours ago
This situation is appalling! Forty minutes from the national capital and you need to buy bottled water to drink and wash clot... View
Tegan Gilchrist - 1 day ago
Amy LD and the clothes!!! Swapped out all out white sheets for greys. Blazer ruined. I now fill up bottles of water from my p... View
Community 1

Lifeline Canberra - 20 hours ago
We love Sarge! Thank you for continuing to support the vital work we do in the Canberra community. Bring on Jan 30! View
show more show less
*Results are based on activity within last 7 days

@The_RiotACT @The_RiotACT
Looking for a new home you can move straight into? This fully renovated & delightfully styled family home needs no further work and is ready to go https://t.co/YyEAGbNns5 (10 hours ago)

@The_RiotACT @The_RiotACT
A big, green mixed-use development planned for Gungahlin Town Centre may be powered completely by the sun and charge vehicles in the basement https://t.co/JqLOjLL10K (11 hours ago)