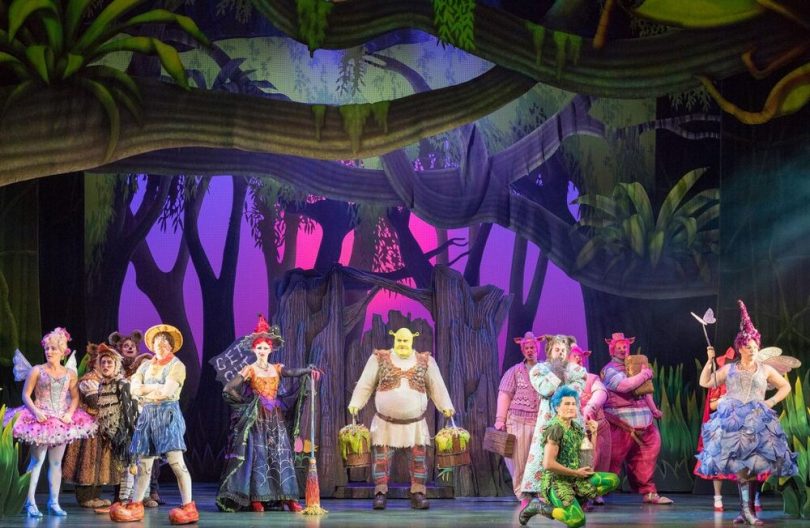 The Canberra Theatre Centre has postponed Shrek The Musical due to COVID-19 restrictions.

First announced in December last year, the musical, telling the tale of Shrek and his loyal steed, Donkey, as they set off on a quest to rescue the beautiful Princess Fiona from her tower, was to play at the Canberra Theatre from 14 February.

However, recent changes to COVID-19 restrictions have affected scheduled dates of the production, and the ability to tour the musical following its current season in Brisbane.

Canberra Theatre Centre Director Alex Budd said they are exploring opportunities to present Shrek The Musical at a later date.

“We know that this is disappointing news for our audience, but we wish the cast, crew, the Queensland Performing Arts Centre, and the Gordon Frost Organisation all the best for a successful Brisbane season.

“Canberrans are eager to experience more blockbuster musicals at Canberra Theatre Centre and we intend to meet this demand as soon as we are able,” Mr Budd said.

Existing ticket holders will be refunded. If you purchased your tickets by cash, EFTPOS, or gift card, contact Canberra Theatre on 6275 2700 to finalise your refund.

SJ Killer - 39 minutes ago
Luke Ashe those articles are totally non-related, different areas, different dates, different contexts, click bait, and one i... View
Kriso Hadskini - 2 hours ago
Speculators are buying property that should be for families. And if you are obscenely wealthy why would'nt you? 10% a year in... View
Beck Bianco - 3 hours ago
Probably because Canberra is no longer affordable so people move to drivable towns outside of Canberra View
Property 20

Ben Keaney - 2 hours ago
Also if they are not in the numbers that the anti-brumbies say, what do you think a maximum brumby population should be? Sure... View
Ben Keaney - 2 hours ago
Di exactly how do brumbies keep the fuel load down? Do they eat fine forest fuels such as sticks and leaves? Or Perhaps its t... View
Di Hunter - 6 hours ago
Jackie Hattingh it’s actually proven that they don’t and it is also proven that they are not in the great a numbers as th... View
News 7

Jeffrey Brown - 10 hours ago
Ahhhh those were the days. Standing in the queue and watching the odd brawl of dudes trying to prove their worth. Was normal... View
Lifestyle 8

Brian Myerson - 14 hours ago
Your article does not mention that every person in Canberra should be extremely proud that almost every year they achieve one... View
Property 17

Shane Westmore - 14 hours ago
parking outside Woolies is all 2-hour paid, it's guaranteed this'll be the same... Coles will love turning that area into a m... View
show more show less
*Results are based on activity within last 7 days

The release of the final report on a Spring 2020 survey of wild horses in Kosciuszko National Park has done...
News 39

The staff and customers at Jindabyne Bowling Club were surprised to see a brown snake slither up to the bar...
Opinion 19

@The_RiotACT @The_RiotACT
Cavalry mascot Sarge is turning up the heat on his annual 10 km walk to raise $10,000 for Lifeline in Canberra. Find out how you can help https://t.co/CktjV9PbUV (3 hours ago)

@The_RiotACT @The_RiotACT
Hot in the City: Al Manoosh is serving up a Lebanese breakfast spread in Mawson https://t.co/NbUW7gTjh2 (4 hours ago)

@The_RiotACT @The_RiotACT
Canberra's Aspen Medical is managing the complex quarantine project for over 1000 players and support staff at the Australian Open https://t.co/2g9k9PDi8r (5 hours ago)