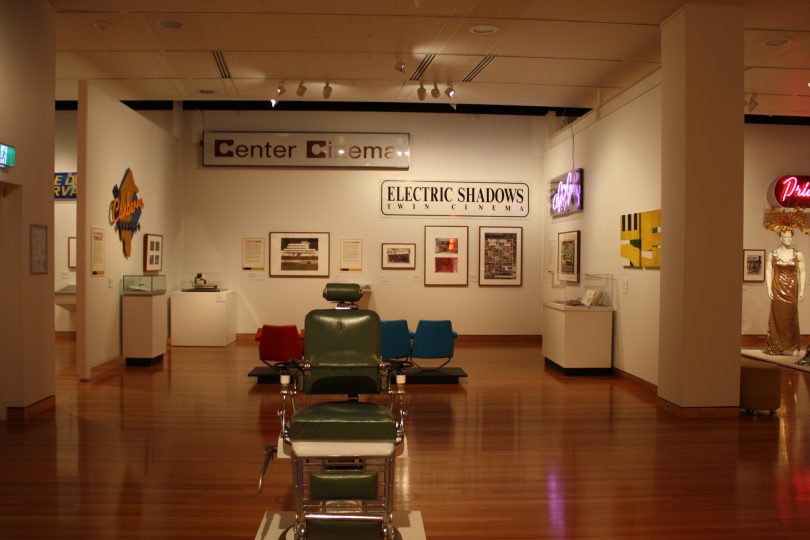 CMAG’s new exhibition ‘Sign of the Times’ is on show until February 2021. Photo: Supplied.

Whether it’s flicking through the shelves at Impact Records, nights sticking to the floors at the Private Bin or a first date at Electric Shadows, the signs on display at Canberra Museum and Gallery’s new exhibition are sure to evoke a memory or two.

For senior curator Sharon Bulkeley, the Sign of the Times exhibition is an “unusual and evocative way of telling stories about Canberra, using the signs as a jumping in point”.

Ms Bulkeley says there is this a really strong sense of nostalgia among certain sections of the Canberra community “for the Canberra of old”.

For Craig Collins, the exhibition is personal.

Mr Collins, who is passionate about all things astronomy, loaned the museum some memorabilia for the exhibition from his 22 years working at the Canberra Space Dome and Observatory, from its opening in 1985 to its eventual closure in 2008.

Mr Collins says seeing the Space Dome sign in the museum is sure to spark fond memories for many Canberrans. Back in the day, you could head to the Tradies Club for dinner, and then traipse up to the planetarium to gaze at the stars.

It was an especially popular place to visit when Halley’s Comet made a visit in 1986. 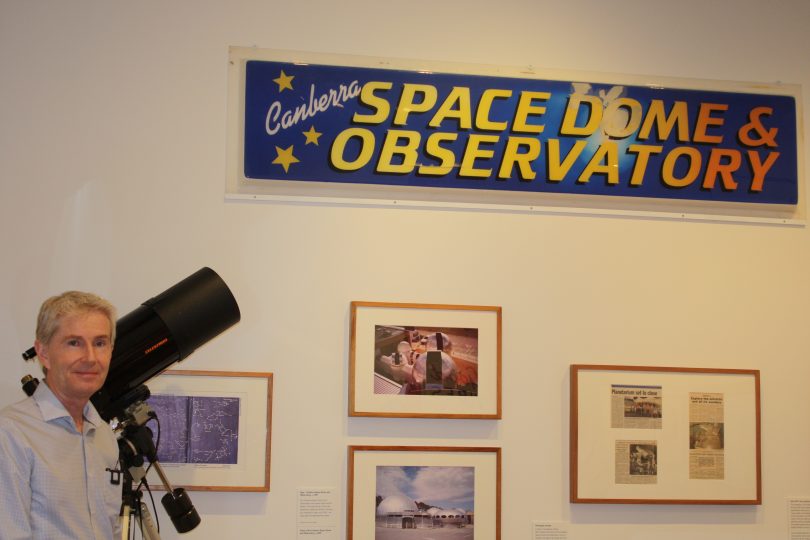 Craig Collins worked at the Space Dome for over 22 years. Photo: Lottie Twyford.

After moving to Canberra as a “youngster”, Mr Collins says he “didn’t know many people in Canberra” and so his work there became a great way to engage with the community.

He describes his time at the planetarium as a “huge part of his life”. So huge, in fact, that he even met his wife there.

Karen, a science teacher, was looking for inspiration for a unit she was teaching on astronomy and, after hearing Craig’s voice in the dark, ended up finding love as well.

The facility was destroyed by fire in 2010 after an arson attack, and much of the equipment was damaged. 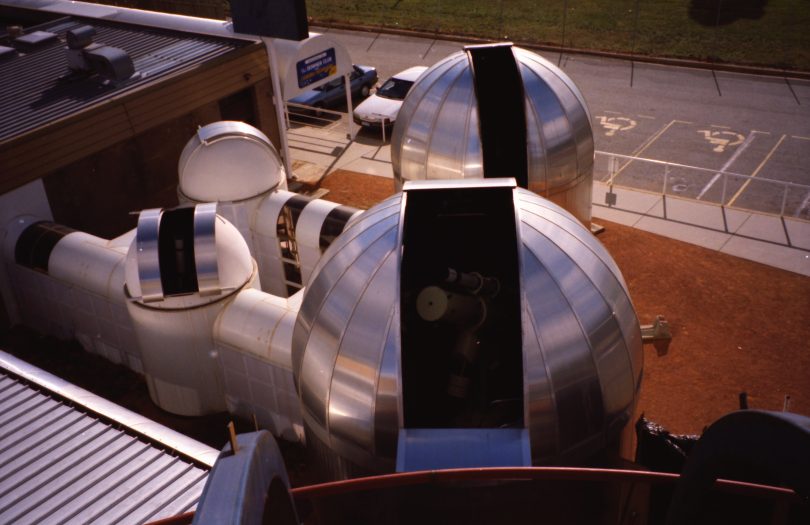 An aerial view of the Space Dome & Observatory. Photo: Supplied.

A lot of what survived has ended up in Mr Collins’ possession, including visitor books, photos and even a telescope.

Other items have been repurposed: the Futuro found a new home as a building at UC and a deal with the ANU saw some equipment rehoused at Mt Stromlo.

After the closure of the facility, Mr Collins became a founding member of a lobby group to build another planetarium built in the capital. 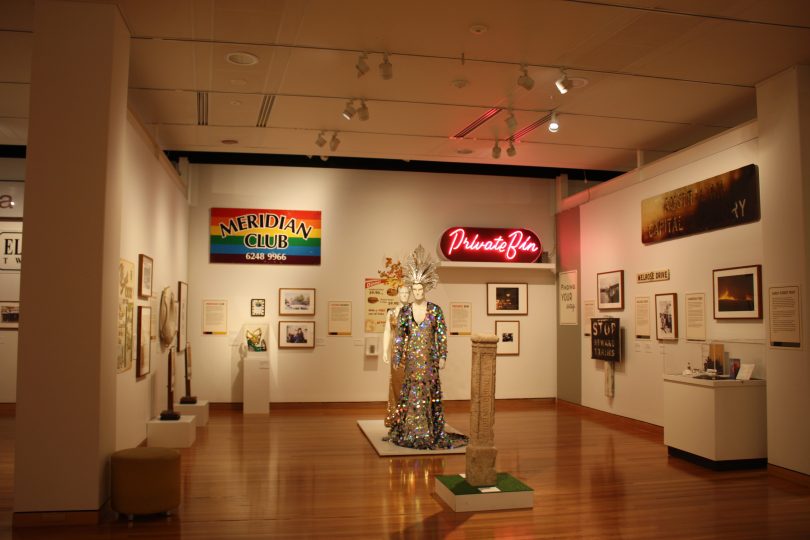 Many Canberrans will remember the Private Bin and Meridian as the hubs of Canberra’s nightlife. Photo: Lottie Twyford.

For Canberra’s LGBTIQ+ community, the Meridian rainbow is more than a sign, it’s a symbol of the growing acceptance of the capital’s gay and lesbian community.

For Richard Allen, AKA Rachel – one of Canberra’s best-known drag queens – seeing the rainbow in CMAG “takes him home again – to friends both past and present”.

The memories, for Mr Allen, are bittersweet.

Meridian remains Canberra’s only community-owned and operated gay and lesbian club. It was, for Mr Allen and many others, a “space for acceptance” and one which he says Canberra has a real need for again.

Mr Allen says the club’s premises in Braddon opened in 1991, with every “queer in the village coming out, and shut its doors in 2004, unable to compete with bigger clubs like Heaven”.

These days, the building is fenced off and awaiting demolition.

There were tough years – the murder of Dr Peter Rowland and the AIDs crisis which saw the loss of many lives, for example.

He says it’s an “honour” to see the sign in CMAG’s possession as he knows it “will be taken care of forever”.

Also entertaining Canberrans after dark, the independent Electric Shadows cinema operated for more than 27 years from 1979.

For some, it was the perfect place for a first date; for others, a place to catch quirky and local films.

CMAG has been slowly gathering the collection of signs for a number of years, and Ms Bulkeley says the show has been on the “back-burner” for a while.

All of the signs they have collected are individual – none from franchises – and they were all on display for multiple decades, meaning, according to Ms Bulkeley, they “became part of the Canberra landscape”.

“People get really excited when they see the signs because they remember the emotions they evoked,” she says. “Maybe going to the movies with your friends or having a first date there, or sitting outside the Private Bin and how sleazy it was – but it all can bring up these memories of youth.

“Particularly at the moment because Canberra is changing so rapidly, there are new buildings going up, green spaces are being filled in and the places that we were so familiar with are disappearing.”

Other signs which are sure to evoke a response include the burnt-out Australian Capital Territory sign from the 2003 bushfires and the bright blue ‘cuddles and bubbles’ sign which once greeted drivers on Northbourne Avenue.

The exhibition is running at CMAG until 20 February 2021.