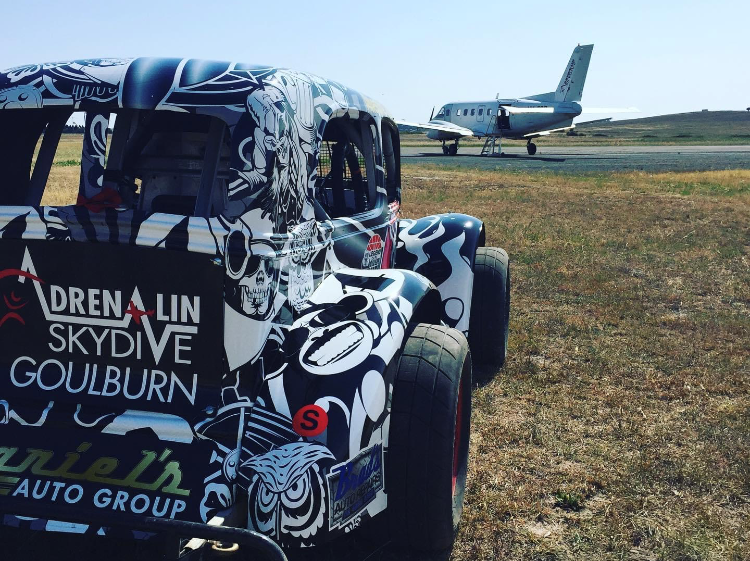 Two parachutists have died in what’s been described as a “freak accident” at Goulburn Airport. Photo: Adrenalin Skydive Goulburn.

UPDATE 28 June, 4:45 pm: Goulburn Police Station officer in charge, Inspector Matthew Hinton, has confirmed the skydiving instructor, 37, and passenger, 32, who died in an accident at Goulburn Airport over the weekend were from Sydney and Canberra, respectively.

Inspector Hinton said the men had been unable to deploy their parachutes before they landed near the airport runway.

He said police believe this was due to their equipment becoming “snagged” on the outside of the plane before they jumped.

By the time their equipment was dislodged from the aircraft, the pair was at an insufficient height to open their parachutes.*

Police have not released the names of the deceased.

The skydiving instructor who died in an accident at Goulburn Airport over the weekend has been described as “well-known” and “loved” by his employer.

Adrenaline Skydiving spokesperson Scott Marshall didn’t wish to name the instructor but said he would be “sorely missed” by the company and skydiving community.

“He had a young family, who our hearts go out to,” said Mr Marshall.

The instructor and a customer, both males, died while skydiving at Goulburn on Sunday (27 June).

NSW Police said emergency services were contacted about an aircraft carrying two skydivers that was in difficulty at around 12:50 pm.

The two parachutists fell from the aircraft and landed near the airport runway.

They were located unresponsive and unable to be revived.

Mr Marshall described it as a “freak accident” but acknowledged the company was awaiting more information about what happened.

The Australian Transport Safety Bureau, Australian Parachute Federation and officers from the Hume Police District are carrying out investigations.

A report will be prepared for the coroner and the business will remain closed while investigations take place.

Speaking the day after the accident, Mr Marshall said everyone was “still in shock”.

“We’re all processing the tragedy today and probably will be for quite a while,” he said.

This isn’t the first skydiving accident at Goulburn Aiport.

Another instructor died and a teenager was critically injured during a skydive with Adrenaline Skydiving in Goulburn in 2015.

Adrenaline Skydiving told the ABC at the time that the pair had been caught by turbulence and crashed to the ground.

Mr Marshall said Goulburn was a very popular drop zone that operates mainly on weekends and attracts a mixture of sport skydivers and tandem passengers.

He reinforced that Adrenaline Skydiving takes safety “very seriously” and that Goulburn was a “really safe dropzone”.

He said the instructor who died on Sunday was “a very experienced skydiver” who had completed more than 2500 skydives.

“I feel very sorry for the people involved, for their families and the skydiving fraternity. It’s not the sort of news anyone wants to hear or the type of publicity you want about your business,” he said.

*An earlier version of this story said the accident was a result of a technical failure. This was incorrect.

Michael Lemmey - 1 minute ago
Justin Watson hope these help, mind you, these are just a drop in the 1000s of papers and articles out there, I just found th... View
Mat Lenaghan - 1 minute ago
Michael Lemmey Again, comprehension is lacking. Where is the data from the scientific literature on the long term effects of... View
Kieran Angus - 2 minutes ago
Rade Kosa yeah and? We get boosters of a bunch of vaccinations? Tetanus is a good example. View
Opinion 6

Fred Colon - 1 minute ago
Absolutely and it's a great thing. But it is ne in a hundred - over 12. View
Peter Higgins - 15 minutes ago
Daniel Oyston true, now you have your wonderful little vaccine card to wave around and signal your virtue. (FYI, the app trac... View
Shane Jasprizza - 25 minutes ago
One in a hundred Canberrans remain unvaccinated; the risks are extremely low. View
Community 24

Lindi Loo - 50 minutes ago
Are these two 'paid actors'? If not, they should be! Brilliant 😂👏... View
Emily O'Shea - 52 minutes ago
Jen O'Shea watch the video in this View
Shannen McCann-Geiger - 3 hours ago
The wife looks super happy to be there View
Sport 130

Jim Reid - 50 minutes ago
ACT Govt doesn’t need any more $$ they’re literally the worst financial managers and they wouldn’t be transparent as to... View
Graham Smith - 1 hour ago
Michael good suggestions. Another consideration is certainty that the revenue from pay parking is well and truly sufficient t... View
Simon Ford - 2 hours ago
Bev Anderson paid parking and a toll on the road to get you there. Then you can be just like Sydney! 😁 View
Lifestyle 10

Chris Partridge - 52 minutes ago
Denise Show Monica... View
Kathy Johnson - 2 hours ago
Barb made our eldest sons blanket 38 years ago, then the blanket was passed on to our eldest grandson 11 years ago. Our blank... View
News 6

Jon Billows - 1 hour ago
Warwick Bradly Canberra doesn't have a price cycle like other states, just constantly expensive. Other states prices fluctuat... View
Warwick Bradly - 1 hour ago
Did you not read the article? All cities are copping higher petrol prices. If you check Petrolspy.com, you'll see Canberra ha... View
Opinion 18

Acton - 2 hours ago
Zed is only one of 4 ACT senators so why don't one of the others sponsor a bill? It can't just be the fault of the Morrison L... View
TheSilver - 2 hours ago
How about the government stop restricting freedom of association, freedom of movement, the right to privacy and freedom of sp... View
Samuel Gordon-Stewart - 6 hours ago
I find it bizarre that the majority of society seems to think suicide is tragic and has to have ample resources thrown at pre... View
Business 7

The number of wild horses in Kosciuszko National Park would be slashed under a new proposed plan to manage their...
News 51

An ACT public school principal has come out against the ACT Government's COVID-19 vaccine mandate for teachers in a Facebook...
News 55

@the_riotact @The_RiotACT
Former #gambling addict Markus Fischer used to win big, but then he began chasing his #losses and his life spiralled out of control. Now reformed, he's encouraging others to seek #help during Gambling Harm Awareness Week https://t.co/fzdCR1Zec7 (8 minutes ago)