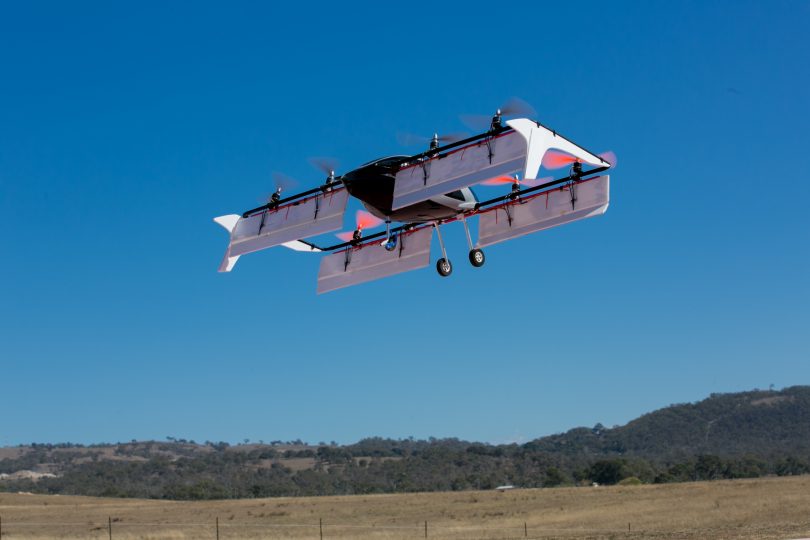 The Verti-plane takes to the skies above the Canberra Model Aircraft Club Flying Field. Photos: Telstra.

Co-founder of AMSL Aero and developer of the Verti-plane, Mr Moore and his team were in Canberra on Wednesday to demonstrate a scale model of his battery-driven aircraft that takes off and lands like a helicopter but flies fast and efficiently like a plane.

Mr Moore believes that eventually the autonomous aircraft and fully utilising the airspace available will revolutionise the way people commute and where they live and work.

“In cities like Sydney there are serious congestion issues with the average commute to the centre of Sydney being 50 minutes. This will cut that down to under 15 minutes,” he said.

“For Canberra, it can change where you live and still allow you to work in close to the city, for example Batemans Bay is only 25 minutes’ flight time away, likewise the snow is 25-30 minutes.

“It radically changes where you live, and you can still work in a major capital centre.”

Mr Moore said the all-electric Verti-plane used patented technology that tilted the two wings to enable vertical take-off and landing. It would be emissions free, quieter and safer than helicopters, and its operating costs equivalent to that of a car, ‘much cheaper than many of the existing transport options’.

“Distributed electrical propulsion is the key technology enabler,” Mr Moore said. “There are lots of smaller electrical motors distributed around the wings of the aircraft, which means you can do novel things with the flight control of the aircraft and how you drive the transition from the vertical flight to the horizontal flight.” 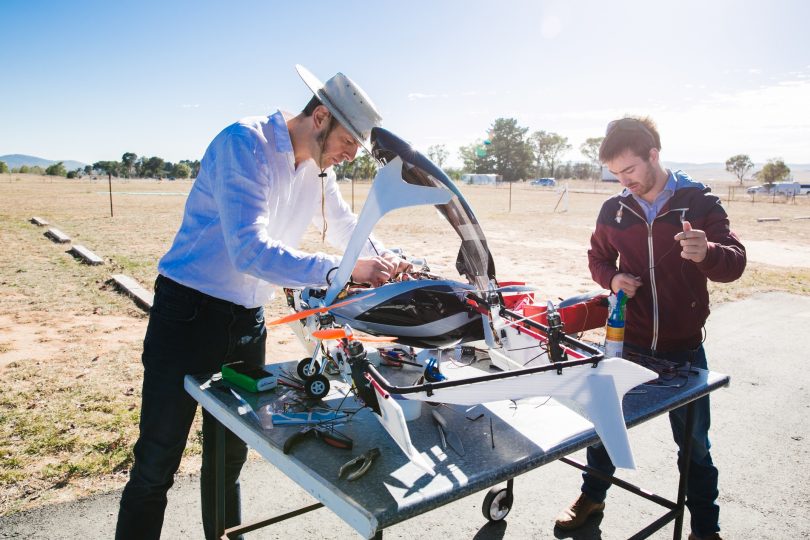 Intended to take off and land from small open spaces such as the corner of a carpark or rooftop heliports, the vertiplane would fly at 300km/h at a cruising altitude of 300 metres.

“The ultimate vision is that it’s an autonomous vehicle and everyday commuters would use it like they would a rideshare,” he said.

The company aimed to build a two-seater prototype in the next 12 months, then scale up to a six-seater, delivering a commercially available aircraft in five years.

It would also have applications for the military and emergency services as medivacs and the for deployment of personnel and equipment.

It would be particularly useful for firefighting services because the electrically driven Verti-plane could fly through smoke and heat, unlike helicopters whose engine performance degrades rapidly in such conditions.

Key to the planned autonomous nature of the Verti-plan is the ‘Internet of Things’ (IoT), which is why AMSL Aero is part of Teltra’s muru-D startup accelerator program.

“One of the important pieces of technology and infrastructure that makes this possible and feasible is low-latency, high bandwith communications systems and the 5G network is one of those key enablers,” Mr Moore said.

Telstra Chief technology Officer Hakan Eriksonn said that 5G would be essential to support the increase in IoT connected devices over the next decade.

“Telstra will be able to offer the capability to support the command and control of autonomous vehicles so that low altitude airspace, and also the broader airspace around cities can be more safely managed for airborne technologies including drones and aerial people carriers such as the Verti-plane,” he said.

The son of a navy pilot, Mr Moore started his career as an aeronautical engineer in the Royal Australian Navy, and has over 20 years experience designing and building helicopters and aircraft.

“I’ve always had the aviation bug, always been trying to design the right aircraft. Various technologies that we need have matured to the point where this works and it’s feasible,” he said.

“All the things that I’m passionate about – reducing emissions, making aircraft safer and easier to fly and getting out of traffic – all those things have pushed me into coming up with this idea and concept and the technology now allows it.”

The company’s eventual customers were likely to be air carriers but there had been interest from small to larger logistic companies, as well as Defence and emergency services.

The goal was to find the right investors so AMSL Aero could continue to design and build this aircraft here in Australia, Mr Moore said.

Liam O'Toole - 3 minutes ago
Emphasis on international students. ANU is discovering the results of putting all your eggs in one basket. View
Matthew Soall - 9 hours ago
Maybe ANU should be more focused on teaching students then running the place like a business. View
Capital Retro - 10 hours ago
The alarm bells are ringing now: https://www.abc.net.au/news/2021-04-23/anu-unveils-162-million-budget-deficit-due-to-covid-1... View
Opinion 66

Claudio Neumann - 46 minutes ago
Jesse Pricsina I feel these vibes very strongly. also get off my lawn darn kids with their scooters View
Michael Ilsley - 2 hours ago
I love scooters, fabulous! View
Mark Boast - 4 hours ago
They are “shared paths” in the ACT so not restricted to one user type. View
News 68

Jenny McInnes - 60 minutes ago
Lea Powell how much is this mimimal welfare budget ? And whatever you did, you are excused. View
News 21

ChrisinTurner - 4 hours ago
This is the private enterprise model driven by profit. Nationalise the clinic. View
News 73

Milestone Entertainment - 8 hours ago
Well said! We have been fortunate in Canberra, however the current restrictions on entertainment venues are crippling to both... View
News 27