Slavich to run ‘Capital’ Mariners push for our football hearts 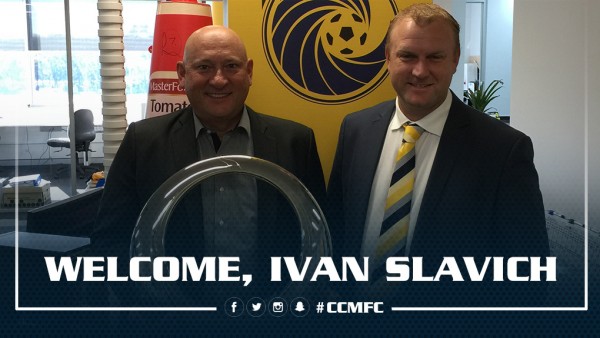 As the capital’s football fans prepare to cheer on Canberra Olympic in their FFA Cup semi-final against Sydney FC tonight, it will be in the knowledge that the organiser of the city’s 2012 bid for its own A-League team is now working with the Central Coast Mariners to ensure they become just that.

The Central [aka Capital] Coast Mariners want to achieve for soccer in the ACT what the GWS Giants have for AFL. They will play two home games in Canberra this season, at Bruce on November 12 and February 5, with the support of Capital Football and the ACT Government.

In conjunction with Capital Football, the Mariners have appointed Canberra businessman Ivan Slavich as the club’s Business Development Ambassador in Canberra to help create awareness of the Mariners brand and the upcoming matches.

Former TransACT boss Mr Slavich is the managing director of Trident Corporate Services. He headed up the A-League4Canberra bid in 2012.

The first match is a Remembrance Round fixture on Saturday 12 November against the Wellington Phoenix. Organisers are hopeful that the recent commencement of direct international flights between Canberra and Wellington will entice hordes of New Zealanders to fly in for the game.

The February 5 match is against Adelaide United.

The Mariners have a longstanding relationship with Canberra, having hosted two A-League home matches here in 2009, against Perth Glory and Adelaide United.

Mr Slavich operated as the man on the ground for the Mariners during the team’s pre-season matches here last month.

“For so long I have been yearning for a Hyundai A-League team in Canberra and now we have it,” he said.

“Just look at how excited the football community is about our very own Canberra Olympic FC taking on Sydney FC, we are so proud that they have gone this far in the FFA Cup and can’t wait to see our boys beat Sydney FC.”

Mr Slavich was instrumental in Canberra’s bid for an A-League team in 2012 and plans to leverage the support built via Canberra’s passionate and vocal football fans to get behind the Yellow & Navy.

“All other men’s sporting codes in Canberra have a team to go for. Union fans have the Brumbies, league have the Raiders and AFL have the Giants, now football fans have Olympic FC and the Mariners in the Hyundai A-League,” he said.

The football fanatic said he was committed to showing the Canberra community that the “Capital Coast Mariners” were Canberra’s team and hopeful that the city could all get behind them.

“I can’t stress how important it is for football fans and local businesses to support our Capital Coast Mariners, if we want permanent fixtures here in Canberra, we need to see big crowds at these games and vote with our feet,” Mr Slavich said.

“We are also re-establishing our fan base that we built for the ‘A League 4 Canberra bid’ called Capital Punishment, we will combine with the Mariners Yellow Army to cheer on the boys.”

As a lover of all sports, I just can’t get behind the Mariners, just like I can’t get behind the Giants. They are not a Canberra team. Canberra has no major summer sporting team, so a football or t20 cricket team would draw crowds. The Mariners and Giants are like hiring a suit. Good for a one of equation, but not good if you keep hiring the suit for big occasions without getting the benefits of wearing the suit for all occasions. in the end you pay a lot more and get less value from it.

Great to see someone as passionate about sports as Ivan taking charge with bringing more big matches to Canberra.

Congratulations Ivan! Would love to see socc–, I mean, football, achieve the same following (and coverage) in Canberra as Aussie Rules, rugby and league …

Canberra ratepayers cannot afford to subsidise another football code.
Having said that I would be happy to see the constantly broke Brumbies move on to another town and the direct and indirect ongoing support they receive from the ACT Government re-allocated to an A League soccer team.

Annabel Dobson - 4 minutes ago
That’s simply not true. You can see very clearly the damage Brumbies are causing when you ride through KNP. We know scienti... View
Shannon Lister - 11 minutes ago
Michelle Brown your famous. View
Sandy Moore - 10 hours ago
Hmmmmm so a lot of calls to eradicate the horses that were introduced and are not native to this land because of the damage t... View
Opinion 94

Trudy Jane - 9 hours ago
Betty Starbux most people who criticise Canberra have never even lived there View
Joanne Hillermann - 9 hours ago
Well done Marg! Congratulations on your awards. I loved listening to you on the radio about quirky archives stuff. View
Cathy Reid - 23 hours ago
Good on you Marg! Pleased to hear about your success. View
News 26

May Mac - 15 hours ago
"climate change, or global heating as many are now calling it" Another new term? I thought it was amended to 'climate change'... View
Anura Samara - 21 hours ago
Shane Murphy but protest isn't the only way to influence Governments. For example, the Chinese Government will react to marke... View
Christine Mary - 23 hours ago
Shane Murphy how come when in Europe you pass hectare after hectare of solar panels - and in Australia you dont see this anyw... View
News 28