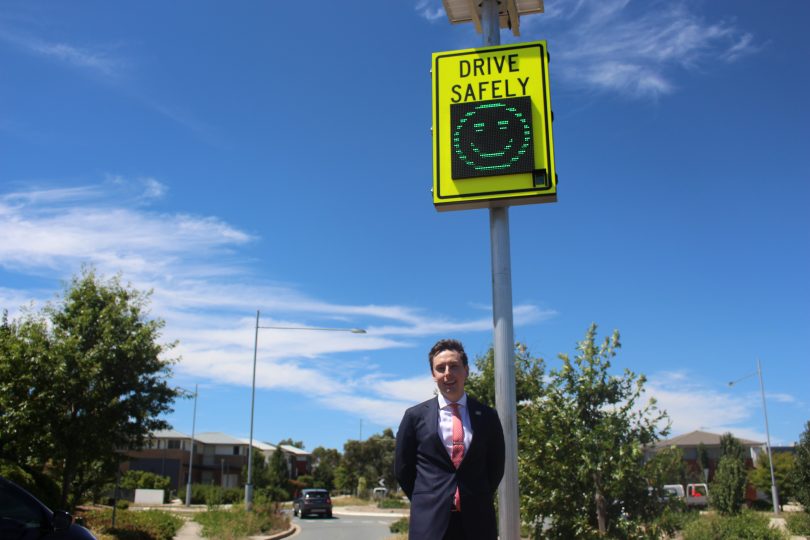 ‘Smiley-face’ speed detecting signs will pop up in Canberra streets with some of the worst speeding problems over the next 12 months, as the ACT Government trials a new initiative to help combat speeding.

Busy residential streets in Calwell, Crace, Pearce and Weetangera will be the first to get the speed detection signs for a three-month period, with a further seven suburbs to have the portable signs installed during the trial.

Motorists driving along the busy streets will see a ‘smiley face’ if they are travelling within the speed limit or a ‘Slow Down’ message if they are speeding.

Mr Petterson said that the signs are being placed on streets that are known to have speeding problems or have received a high number of resident complaints.

“We hope this will remind motorists to drive to the speed limit and be careful in some of these busy areas,” Mr Pettersson said.

“The signs are expected to remain at one location for up to three months before being relocated elsewhere.

“We are confident that this period is sufficient to positively influence the behaviour of motorists.”

The other three streets to begin trialling the speed detecting signs this month are Casey Crescent in Calwell, MacFarland Crescent in Pearce and Springvale Drive in Weetangera.

The other streets selected to be included in the 12-month trial are:

ACT Road Safety Minister Shane Rattenbury said the signs have been successful in other jurisdictions including Queensland and NSW.

“These new speed detecting signs are not enforcement devices but detect motorist’s speed as they approach the sign,” said Mr Rattenbury.

“The ACT Government hopes these signs will encourage motorists to be mindful of their driving behaviours and I urge all motorists to be safe when travelling on our streets.

“Be aware of speed limits and the road conditions, slow down and drive safely – for all road users.

“There is no excuse for speeding, especially in high-risk areas like school zones where some of our most vulnerable road users are.”

According to Transport Canberra and City Services, the signs will be installed in small concrete footings below the ground on ACT-owned nature strips.

When the signs are removed from each location the footing will be closed with a lid, thereby sitting flush with ground level.

Do you think the ‘smiley face’ signs will be effective in reducing speeding problems? Have the best streets been chosen for the trial or are there problem streets which have been missed? Let us know your thoughts in the comments below.

I like this idea but, the ‘smiley’ face just makes it a joke. I imagine the public servants who thought of that had a liquid lunch before hand. Instead, the sign could display the speed detected. That would be useful to drivers.

Yes, there are bozos who will not be deterred – they like to drive unlicensed, uninsured, unregistered and some on bail for drink driving. But in a city of 375,000 there just aren’t that many bozos. The rest of the populace do care and do try to do the right thing. Perhaps many like to try out 5kph over the limit but will reduce their speed when reminded by one of these signs. The idea is to change the behaviour of the majority of drivers. That will increase safety. Then, the police can go after the bozos.

The current speed cameras don’t help by sending a pay-up or else demand weeks after the event – my reaction “Blimey – when was that ? I could have sworn I was below the speed limit. Did I miss a speed sign” etc. A sign that says I’m doing 61kph in a 60kph zone will help lighten the foot on the throttle without punishing for what’s probably a minor momentary infraction. Of course, it would be a doddle to put a “smiley” sign on the outside of all radar vans but, I suspect the ACT Revenue Office like to keep us guessing until something arrives in the mail !

Nice to see the first sign here in Pearce. They moved the signpost for Sheehan St over the road to put it there. Now they can fix the oversight a few metres away up the hill where there is a sign welcoming people to Chifley but there is no sign on the other side for Pearce.

Another distraction to drivers with a human face.

They last 3 months until stolen?

Re Finland, my research indicates that speed limits are fixed at low speeds with 50 kmh inside city limits and 80 kmh outside with occasionally marked increases to 100kmh.
In wintertime maximum speed anywhere is 80 kmh.

If there is some research on why these smiley signs are effective (and why that is surprising given the low aggregate limits there) I would be pleased to read it.

This is a more effective device to stop speeding drivers: https://www.youtube.com/watch?v=wt191byLmz0

We have them in Brissy they dont deter speeding at all

Nothing will deter speeding motorists, sorry. Driving into Canb down towards the tram lines on Tuesday, a large SUV ignored the flashing speed sign, his speed was 92 in a 60 zone and even though the message to slow down flashed, he just kept going….
Only a police presence seems to slow these bozos down (until they drive a safe distance away and they return to their original speed).
A smiley face won’t change anything…
Who comes up with these lame ideas?
Just buy more speed cameras if you’re serious, bill the speedsters triple to pay for them instead of expecting the well behaved drivers to share that cost.

Nope, unmarked police are the way to go. Speeders simply slow down at speed cameras & speed elsewhere. Unmarked police can find the real dangerous idiots & fine them, often for more than just speeding (eg, speeding, unsafe/neg driving, not indicating etc) if they tail them for a while. That would then hit them hard & hopefully bring about a proper change in their attitude. Perhaps a court enforced job of cleaning up accident sites may also help assist their attitude adjustment.

Disclaimer – I am not a police officer.

This is actually a really good way of encouraging people to check their speed without a punitive (financial) punishment. It’s actually well researched, and I think I read about the concept from memory in Ron Jonsons book called, ‘So, you’ve been publicly shamed.’ On average people then hold to the sign posted speed limit for around a further 14 kilometres after seeing these types of signs.

I’m pleased to see one outside my children’s school in Calwell.

I’m tipping there was quite a lot of thought put into this, with quite substantial evidence. Do people really have such low regard for the public servants responsible for this? Don’t you think there is a body of investigation, study and evidence which had to go through the process of approvals prior to being presented to the minister for decision and implementation?

Are people seriously that simple that they can’t appreciate there may be more to it than your own immediate reaction?

Regarding your first paragraph my short answer is “no”. Yet another “oh that could be a good idea” moment

Another huge waste of money and very poorly thought out. Visible policing! with the money they spent on this they could have paid for some police presence, time and place which has been researched and assessed as most effective. But nooooo, “we’ll put up your smiley faces Mr Manufacturer if you put some more money in our pockets” says the ACT government. Christ, when will they stop this self indulgent thoughtlessness!?

I’m tipping there was quite a lot of thought put into this, with quite substantial evidence.

Let’s see shall we

Why not present us with the evidence? Maybe then us doubters will shut the eff up.

I mean they mention it’s been successful in other jurisdictions

Another wasteful use of taxpayer monies for what effect? Really?

They need to blow a raspberry if you’re over the limit.

What about a sign to go in school zones that detects if you are speeding and shoots flouro paint on your car? Not only would it be a great deterrent but then we would all know who the jerks that speed through school zones are.

Until it sprays a windshield and the car collides with a person or other vehicle.

Yeah good point. Back to the drawing board…

Why would you want to know who speeds through school zones?

To harshly judge them.

I’m sure they would really care bud.

Make them assist at school crossings whilst wearing a sandwich board & dunce cap with “Learner” emblazoned on both.

Some people are gonna speed to see if they can make the face go from sad to crying.

As a driver it is really useful to get an evidence based message about the speed I am driving at. More useful than just another sign to slow down.

Your speedo isn’t enough? You’d like a second opinion before deciding whether to slow down?

Matt Donnelly Hi Matt, when driving it is easier for me to read a sign within the driver’s field of vision than to look down, peer through the steering wheel, adjust my focus and check my speed according to Hyundai. Possibly others can do this trick more efficiently than me.

How many Mondays do you have to waste JDog 😂😂😂

Does anyone really think this will work?? Even kids don’t care about smiley faces any more. Canberra drivers who ignore speed limits are only motivated to do the right thing if there is a chance they will be busted.

Who said that’s not going to be the case? Cop cars might still be there. 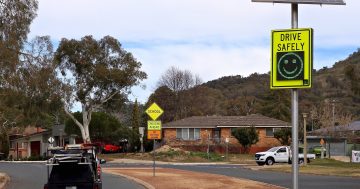 Sign o' the times: at last there's something to smile about in 2020 (if you've been good) 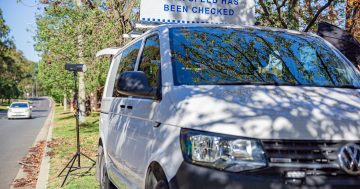