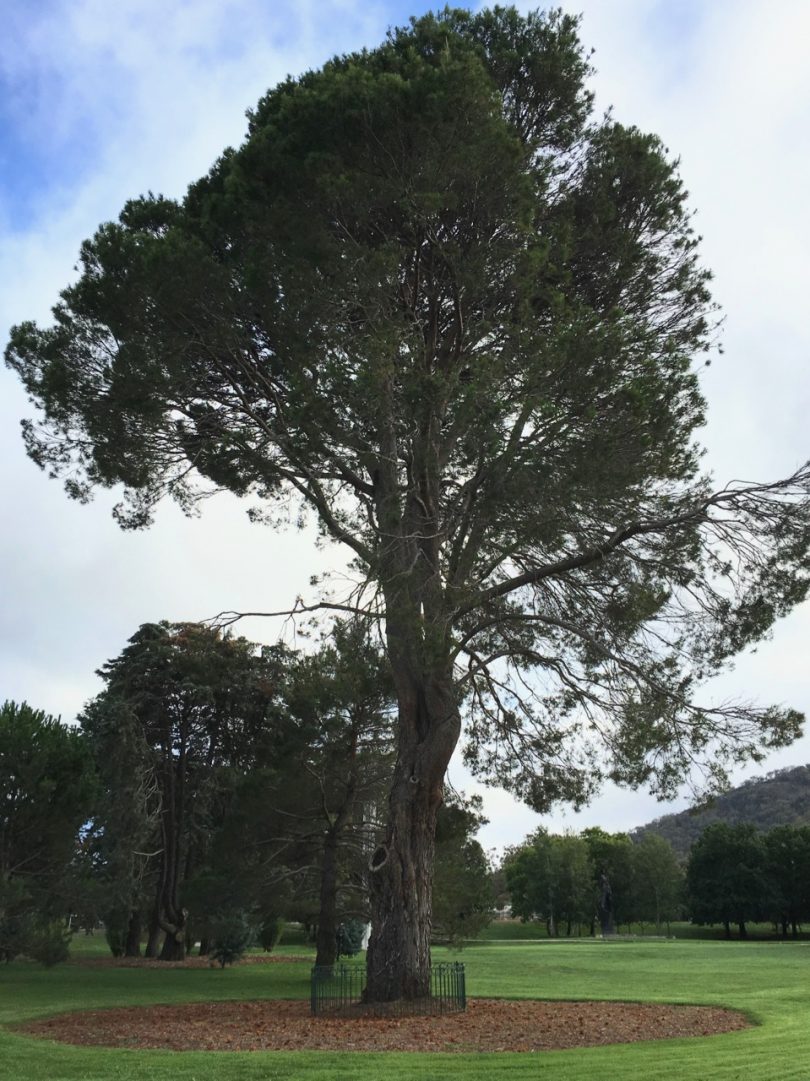 The Lone Pine planted on the grounds of the War Memorial in 1934. Lone Pine seedling planted in 2014. Photo: Marg Wade, Canberra Secrets.

In Lennox Gardens behind the Hyatt Hotel, amidst a group of conifers, is a large, old Monterey pine (Pinus radiata). It is the last remaining of several Monterey pines planted in 1918 by Charles Kaye, on what was then the family farm, to commemorate the safe return of his son from World War I.

On a more sombre note, the 20 metre-high Aleppo Pine (Pinus halepensis) we know as the Lone Pine on the grounds of the Australian War Memorial commemorates the loss of a mother’s son, but also nearly 62,000 other sons over whom their grieving mothers shed their tears.

The Lone Pine has watched the city grow around it as it too has grown, but over the decades this tree has kept on giving.

Planted in October 1934 by Prince Henry, Duke of Gloucester, the Lone Pine stood in an empty Canberra paddock with little around except for the foundations of the soon-to-be-built Australian War Memorial.

The young sapling was a gift from Jane McMullin from Inverell, in memory of her son Mark who died during a major offensive at Plateau 400 at Gallipoli on 6 August 1915. Mark was one of 2,000 Australians who died during the offensive, along with an estimated 7,000 Turks.

Mark’s twin brothers Benjamin and Bert had also enlisted in the AIF. During his time in Gallipoli, Benjamin, a Lance Corporal in the 3rd Battalion, sent their mother a pinecone taken from one of the branches used as overhead trench cover.

Mrs McMullin kept the pinecone in a drawer for 13 years. Perhaps her grief was too hard to bear, but for whatever reason, she finally shook the seeds from the pinecone and propagated three seedlings. Two of these survived, just like her sons. She gave one of these precious links with Gallipoli and her son’s burial place to the city of Inverell where her sons had enlisted, and the other to the Australian War Memorial, in memory of all the sons who had fallen.

Since the 1940s, Yarralumla Nursery has collected and propagated seeds from the Lone Pine. Thousands of seedlings have been distributed around the country, particularly for commemorative purposes. You can still buy these from Yarralumla nursery and the War Memorial ­— but beware, they are not for suburban blocks, they grow very large.

In a historic gesture in 1990, two pines descended from our Lone Pine were returned to Gallipoli. They travelled with 47 original Anzacs on a pilgrimage to Gallipoli for the 75th-anniversary commemoration of the Anzac Cove landing.

So revered is this tree that the timber from the splintered limb was not discarded, but tasteful keepsakes were crafted from it and sold in the memorial’s shop.

And the story of giving continues.

In 2014, not far from the original Lone Pine, the Duke and Duchess of Cambridge planted a new seedling propagated from the Lone Pine, ensuring a new generation lives on in the memorial’s gardens — a succession plan, as it were. 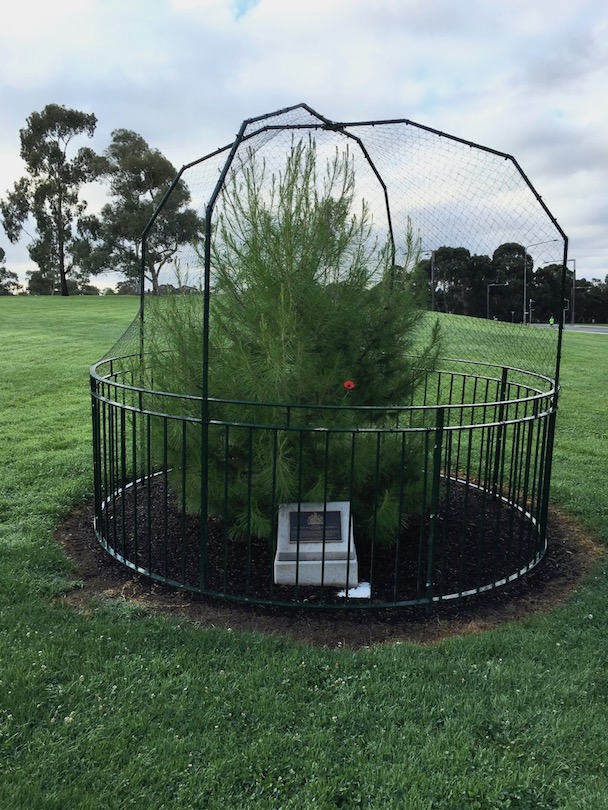 But what became of the seeding that was planted in Inverell?

Sadly, that tree has come to its life’s end, felled in 2007, almost 100 years from when the original pinecone was sent to a grieving mother.

A plaque made from that tree’s timber has been created, which today stands inside the Inverell RSM Club. This tells the story of the pinecone sent home to Mrs McMullin by her son Benjamin, and honours those sons who never returned.

Also in the club is another special memento — a piece of timber, retained from that tree, with a small sculpture depicting service and sacrifice in the form of Simpson and the donkey. 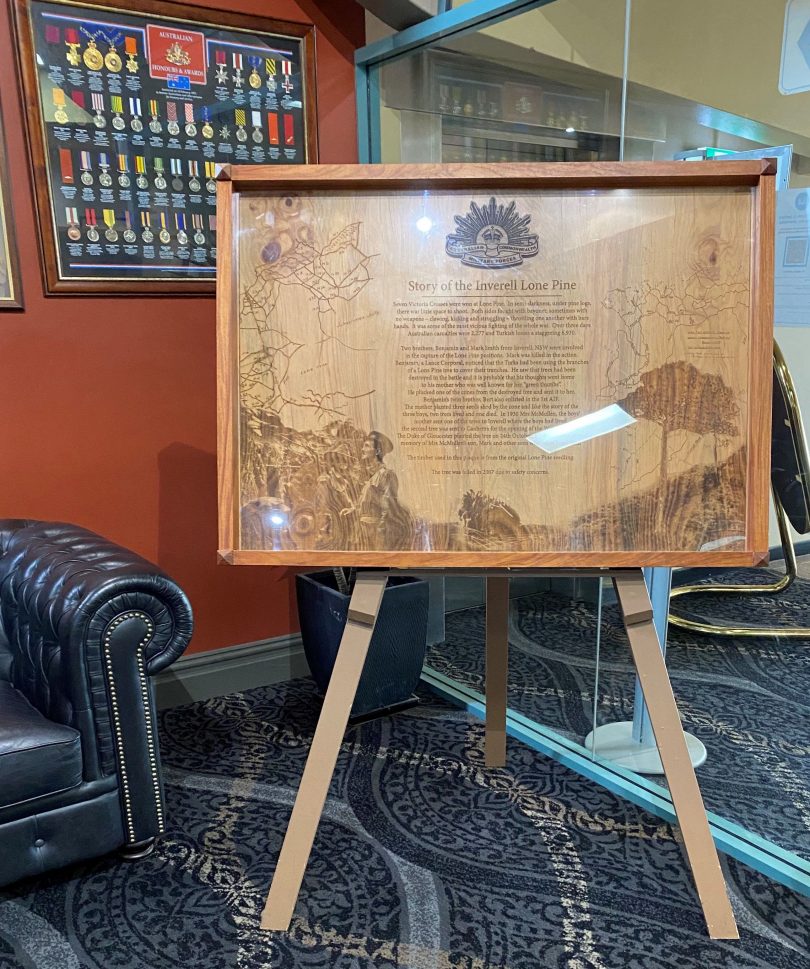