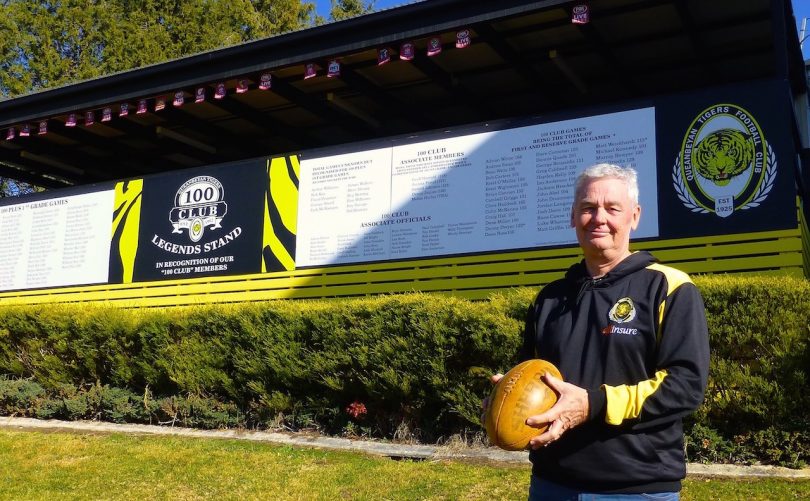 A blisteringly cold wind buffets AFL players last Friday night (12 July) at Gungahlin. There are more players on the oval than in the stands watching.

But Gary Bullivant is there to see his beloved Queanbeyan Tigers take on the Gungahlin Jets in the AFL Canberra First Grade Men’s competition.

There are ankles to be strapped; hamstrings that need a bit of extra blood flow.

This is the ritual of a volunteer and it’s one that is played out on sporting fields every weekend. It’s a selfless task but it’s also highly rewarding.

Gary has now been recognised for his tireless efforts with a distinguished long service award at the NSW Community Sports Awards at the NSW Parliament House at the end of June. He was one of 20 recipients in NSW who received the award.

Gary is the first to admit he was never a great footballer.

He served on the Queanbeyan Tigers’ committee as secretary from 1983 and as president from 1993 to 2017, making him the club’s longest-serving president. Now retired, Gary still assists by securing much-needed grants for improvements to the Tigers’ home ground, which included a $590,000 grant from the NSW Government for new women’s change rooms and a solar energy system.

“Sport in NSW relies on people such as Gary who have voluntarily dedicated their time over many decades,” said Sports NSW Chairperson Carolyn Campbell.

Gary says he is just one of at least 40 volunteers at the Queanbeyan Tigers who collectively contribute to a culture that flows into the wider community.

“I really like to see the club succeed and enjoy being a part of that success, as do all our volunteers. If there’s something that needs doing, we generally always have someone more than happy to put their hand up and help,” says Gary.

“As a volunteer, you can contribute as much or as little as you want. We have ladies who run the canteen and spend a couple of hours here a week. But it’s these little things that all make a big difference to the club.”

Gary still spends up to 15 hours a week with the club. It was as much as 25-30 hours a week, back when he was also working full-time.

Gary says he couldn’t have put that much time and effort in without the support of his family, especially his wife Claire, who helped establish the Queanbeyan Netball Association and is a life member. She also volunteers with Meals on Wheels.

“When we used to take our kids to Little Athletics, we didn’t just sit back and watch. We helped out as timekeepers,” Gary says.

There is always something that needs doing, as sports clubs and those in the wider community will all attest.

“We embrace people and welcome them regardless,” Gary says. “These are the people who will see that something can be done better, and it pays off in the success of the club and the growth of the people who support us.

“You value individuals and it’s a strong part of the culture here. We don’t try to tell others how to do their job… apart from the coaches, sometimes,” he adds with a laugh.

“People say there are not as many volunteers these days with the demands of life and people having less time. But sporting clubs and many community activities simply wouldn’t exist without volunteers. They exist because good people have been able to put their hands up and get involved.

Justin Evans - 2 hours ago
Lights, bells and even boom gates aren't going to stop someone if they aren't watching the road View
John MacCallum - 7 hours ago
All level crossing collisions are avoidable. It just takes people to drive appropriately and not be complacent. See and avoid... View
Scott Turnbull - 8 hours ago
Layla Barry Tragic as these accidents are, it is simply not practical to place lights and bells at every single level crossin... View
News 1

ChrisinTurner - 3 hours ago
More people would use the bus if it didn’t get stuck in the same traffic jams. A bus lane is needed urgently. View
News 11

Dean Carlson - 4 hours ago
Don’t let a noisy minority say they're talking on behalf of the town. This school is desperately needed and the proposed si... View
Kristy Norwood - 5 hours ago
I am 100% for the high school and it's location, as for the park it's government owned and they will do as they need, if they... View
savebungendorepark - 18 hours ago
We should be clear. This isn't about "us against them". Virtually everyone who's campaigning to save the Park supports a high... View
News 8

rationalobserver - 4 hours ago
Shooting is is the most humane and target-specific means of rabbit control available. It can be done quite safely inside sett... View
Stephen Saunders - 6 hours ago
In O'Connor, the worst infestation is along the Centenary Trail, at Bruce and O'Connor Ridges plus adjoining Nobby's Farm. Th... View
Lifestyle 1

Acton - 4 hours ago
Walking or running is healthier and safer for everyone. The worst thing about scooters are the many near misses and dumping o... View
News 54

Juliet Lautenbach - 18 hours ago
Meryl McKerrow I’m actually agreeing with you regarding those who cause the crashes. What I’m saying is that the slower s... View
Pete Notso Fatso - 19 hours ago
Once upon a time cars were sold on things like “power assisted disc brakes” or “RTS”. Nowadays it’s Apple CarPlay a... View
Steve Jones - 20 hours ago
Richard Watts that was on a straight bit of road........ View
Lifestyle 1

@The_RiotACT @The_RiotACT
Researchers have discovered that the waters around popular holiday destination Narooma are a troubling barometer of climate change https://t.co/vbHjduTT7O (3 minutes ago)