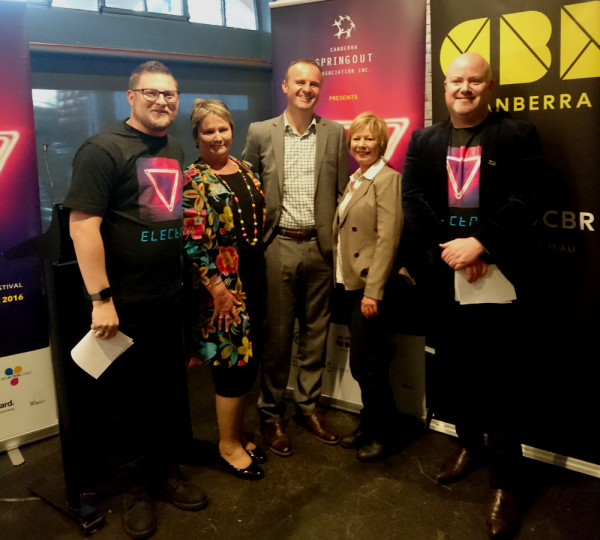 The Canberra Spring Out 2016 festival officially launched at 16West – Canberra’s newest LGBTIQ venue – on Tuesday night. Canberra SpringOUT Pride Festival is the official pride festival of Canberra and the ACT. It has been a project of Canberra Pride since 1999 with events coordinated by the local community. Speaking for Spring Out were the Chair – Matty Knobel, the Sponsorship Manager – Victoria Firth-Smith and the Events Manager – Sean Snell.

The theme for this years Spring Out is: ELECTRIC – “Feel the Buzz”. The theme is designed to get the community energised, to electrify the senses, shock the system, and encourage others to spread the vibe. The major sponsors of this years festival are The Canberra Government, CBR (Canberra), Canberra Gay & Lesbian Tennis Club, AIDS Action Council ACT, Northside Community Service, and 16West. Major supporters are Gaymatchmaker.com.au and Lesbianmatchmaker.com.au, and the Canberra Theatre Centre. Andrew Barr spoke passionately and proudly of his support for the Spring Out festival, including that it was at the first festival 17 years ago that he met his partner, so the festival has a special place in his heart because of that. Andrew confirmed the ACT Government’s funding commitment for the festival for the next 4 years and ongoing, and also announced a new election policy of the creation of an office of LGBTIQ Affairs for the ACT. The office will support the LGBTIQ Ministerial Advisory Council, provide whole of Government advice on LGBTIQ issues and develop policy to ensure Canberra continues to be the most welcoming city in Australia for lesbian, gay, bisexual, transgender, intersex and queer persons. He also committed to targeted mental health services to vulnerable young people including the LGBTIQ community; improved aged care options for our seniors; to continue to support local and national LGBTIQ artists, performers and athletes; and make sure ACT schools are Safe Schools, and that Labor will fund the program regardless of what the federal Government does. Veronica Wensing spoke next, and re-affirmed the Greens commitment to the LGBTIQ community and Spring Out, and commented that while the ACT may already have an openly gay Chief Minister, there might also be a Lesbian in the assembly soon. Veronica was one of the few couples to legally marry their same sex partner for the short period it was allowed in the ACT before the Federal Government shut down the legislative change the ACT made. Veronica mentioned the Greens’ existing policy of the creation of establishing a new ACT Commissioner for LGBTIQ people in the ACT and dedicating $500,000 additional funding to ACT LGBTIQ support services.

Nicole Lawder then spoke, and assured the crowd that the Liberals also supported the LGBTIQ community in Canberra and the Spring Out festival, and informed everyone that Jeremy Hanson had wanted to attend himself but a last minute engagement meant she was filling in for him instead. The Liberals didn’t have any specific LGBTIQ policy announcements, but Nicole reaffirmed the Liberals general support for LGBTIQ issues and the community in Canberra. Nicole spoke about how homelessness affects LGBTIQ people from her experience as the former Homelessness ACT chief executive. Pictured above – Vanity Wilde – by far the most fabulously dressed of the night!

It was good to see tripartisan support for the Spring Out festival itself and the LGBTIQ community in Canberra in general.

There are 35 events taking place throughout the packed Spring Out 2016 festival calendar. The highlights include, in no particular order: @The_RiotACT @The_RiotACT
The Dirty Sunflowers will be joining Slagatha Christie & Highland Light on stage this week. Find the details in our latest Gig Guide https://t.co/dJxSjsQRbd (50 minutes ago)