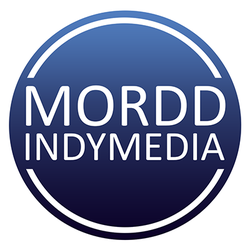 Chris Mordd Richards is an independent freelance journalist in Canberra and the owner/editor of Mordd IndyMedia. Chris is currently a 1st year journalism student studying a Bachelor of Journalism part time at the University of Canberra, commenced in 2017, and already writing & reporting as often as he can for the love and experience of it while he studies at UC.

Chris' particular fields of interest to write about are: Local and Federal Politics; Social Justice and/or Activist causes; Information Technology and Social Media; and Investigative Journalism. Chris records and edits his own video/audio [Mordd IndyMedia on Youtube]; and currently interns for Independent Australia in the Canberra Press Gallery as their cameraman and video editor, so far in May and June 2017.

Chris grew up in, and has lived in Canberra now for over 25 of his 35 years. His personal motto is:

"In a world of fake news and alternative facts, the media is under daily

adhere to the MEAA Journalistic Code of Ethics at all times."

Chris is a member of the Media, Entertainment and Arts Alliance (MEAA), a moderate left wing voter, ACT Greens member since July 2016 and current lifetime volunteer for the Australian Greens. Chris’ personal life story strongly informs his writing and he plans to write about topics he knows well as appropriate during his writing career to come, to highlight important social issues.

Chris started out a homeless street kid at 16, came out as bisexual at the same age and has remained out and proud since, although he prefers the term pansexual these days. To date he has already written in part about his current life working and studying while living in public housing in the ACT, as well being interviewed on what life is like living with bipolar disorder and growing up a homeless youth.

An unabashed massive fan of John Oliver’s Last Week Tonight, Chris’ dream is to one day help bring to fruition an Australian version inspired by John’s masterful blend of serious news reporting and satirical comedy. While the traditional media industry is reforming itself around us every day, Chris looks forward to being part of the future of digital journalism, and strongly supports the role of small and independent media outlets in the current and future media landscape.

Chris no longer submits work for publication on the The RiotACT, but you can read his latest articles on Independent Australia here: https://independentaustralia.net/profile-on/chris-mordd-richards,584 - You can also follow him on Twitter @Mordd_IndyMedia OR on Facebook @Mordd.IndyMedia

Close the Camps: The Walk from Adelaide to Canberra

The Parliament House sit-in that wasn’t

Sit-in for Aboriginal justice at Parliament

Ask Riotact: Can you wear headphones while driving in the ACT?

Woolworths caught out on pricing for shopping bags

Canberra pays its respects for the French victims

Ask RiotACT: Can a red light camera get you for a u-turn?

The good, the bad, and the hilarious – election wrap-up

How not to get scammed on Tinder

Stamp Duty refunds for the North

Australian Government to censor the Internet

DJA - 20 minutes ago
A frictionless airport would ultimately fail because the aircraft will keep skidding off the runway. View
Opinion 99

chewy14 - 2 hours ago
Jorie, Why would I imagine such a thing when it isn't close to reality? As I've said above, the vast majority of people aren'... View
jorie1 - 3 hours ago
Assume there are 300 rental properties in Canberra. And 3000 people looking for a rental property in Canberra (these Canberra... View
Ophellia Knobbs - 3 hours ago
Banning short term/Airbnb in certain areas like Civic & surrounding suburbs would. View
Lifestyle 1

protea - 2 hours ago
Sadly, the machinery shed can be one of the most dangerous parts of the farm - apart from the dam. View
Sport 18

assiduous - 3 hours ago
It speaks volumes that the ACT government has set themselves up as a landlord here. Expensive housing is a problem largely of... View
Sport 1

mathiaseverson - 4 hours ago
Great to have Bayley as part of our team here in CBR and representing us in Poland! View
News 245

Dominic Cookman’s first novel picked up by international publisher, second to be based in Canberra

@the_riotact @The_RiotACT
With more and more families and low-income earners being squeezed out of Canberra's rental market, Community Housing is providing solutions. @APW_ACT highlights the number of ordinary Canberrans facing rental stress and the need for more affordable housing https://t.co/xSlGC5HKMZ (1 hour ago)