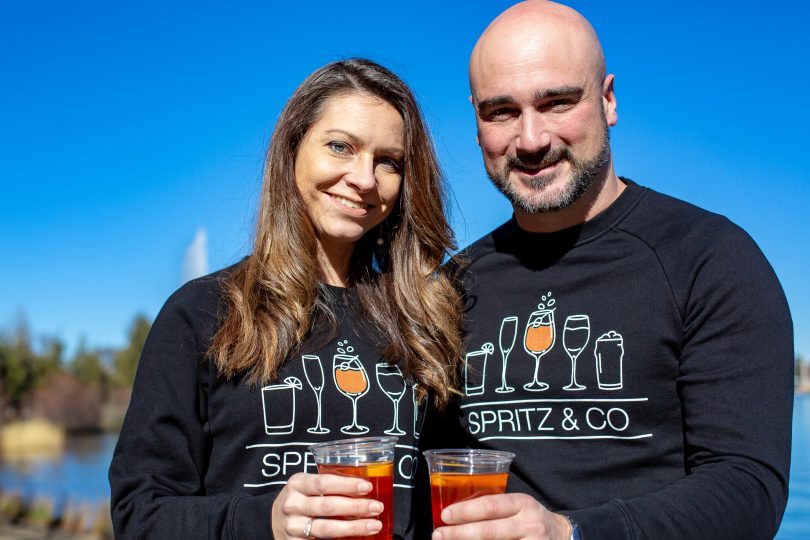 In the early hours of Sunday morning, Gabriel Volpato and Alice Anzanello get out of bed and shuffle into the kitchen to make a hot drink.

But instead of boiling the kettle for tea or warming up the coffee machine, the couple head to the stove to start making their own signature hot drink – spritz brule.

The early morning start is to ensure the bittersweet hot drink mulled with spices and other ingredients will be ready to serve to their customers at the Old Bus Depot Markets later that day.

“We start making it at 2 am, every night before the market – that’s if we are only making one batch,” Ms Anzanello said. “It is something unlike anything you’ve ever had before, and definitely much more elaborate than a regular mulled wine.

“We are the first and the only ones in the whole world crazy enough to attempt turning a popular icy-cold summer drink into a hot-steamy winter one, and we proudly did it right here, in the capital of Australia!” 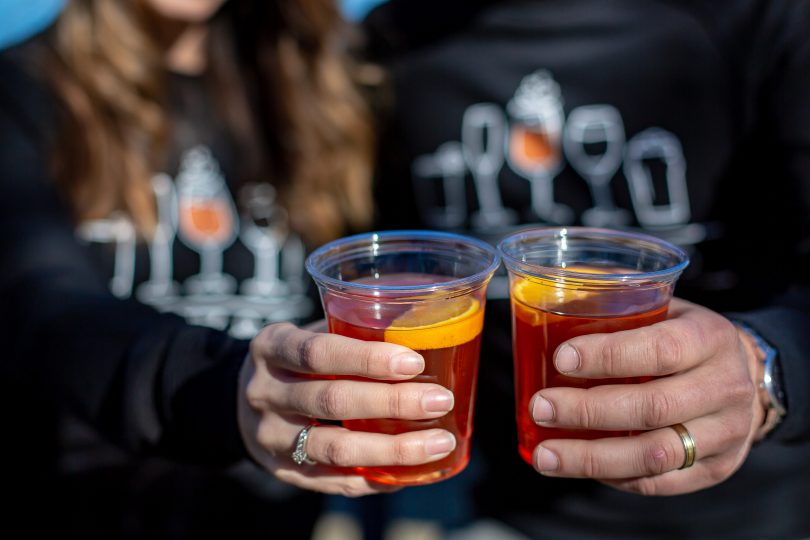 A warm winter drink made with love.

The small local business only started trading last month, with their official launch at the Forage in June. The independent pop-up bar appears around Canberra in various locations, recently making their debut at the Old Bus Depot Markets.

Serving an array of cold and hot beverages including four regular spritzes, two non-alcoholic mocktails, and signature hot drinks, the duo decided to start their own stall when they were inspired by the pop-up bar scene in Canberra.

“The pop-up bar scene in Canberra is bustling and very exciting, filled with both local and imported wine and beer dedicated pop-ups. So we thought to do something different: a pop-up bar specialising in authentic spritzes,” Ms Anzanello said.

“They are happy and colourful drinks that bring people together, we just love them and most people do too.”

Both born in the surroundings of the beautiful medieval city of Treviso in north-east Italy, the couple met for the first time at a barbecue on Bronte Beach in Sydney in 2011. Shortly after, they ended up moving to Canberra for work and fell in love with the city and with each other, getting married in 2014. 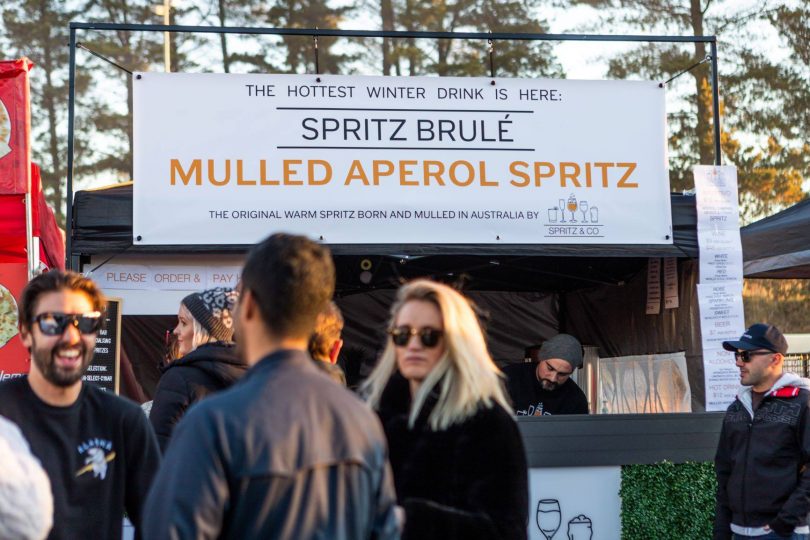 Mr Volpato said the public had a perception that spritz was a hipster drink but the drink could be traced back to the 12th century.

“In fact, the first spritz dates back to the Middle Ages, when the Serenissima Republic of Venice was building its most important shipyard called Arsenale,” Mr Volpato said.

“Master shipbuilders called Arsenalotti used to spritz their wines with spring water at lunch. But it’s not until 600 years later when the former Republic of Venice is annexed to the Austrian Empire that the actual name ‘spritz’ was born.

“The spritz has certainly changed in form since the 1200s, evolving into what we now know today as the classic aperitivo. That is why I like to stress the fact that we are not hipsters following a trend.

“As you can see there’s much more to it than that.”

Dan Cope - 16 minutes ago
👏 well done Emma. View
Alexandra Mary - 48 minutes ago
Jaimie-Lee Peattie it is! So awesome to see more being set up View
Montana ONeill - 2 hours ago
This is good to see and hopefully it grows throughout the region to other areas💙 View
Opinion 51

Take 3: Wine down in the great outdoors with these pop-up bars

@the_riotact @The_RiotACT
A new Senate report is calling for changes to Australian Public Service outsourcing, with one Senator describing it as a world of opaque contracts, rent seekers, shadow workforces and 'sleazy Canberra deals' https://t.co/KB17Gr1YvB (52 minutes ago)