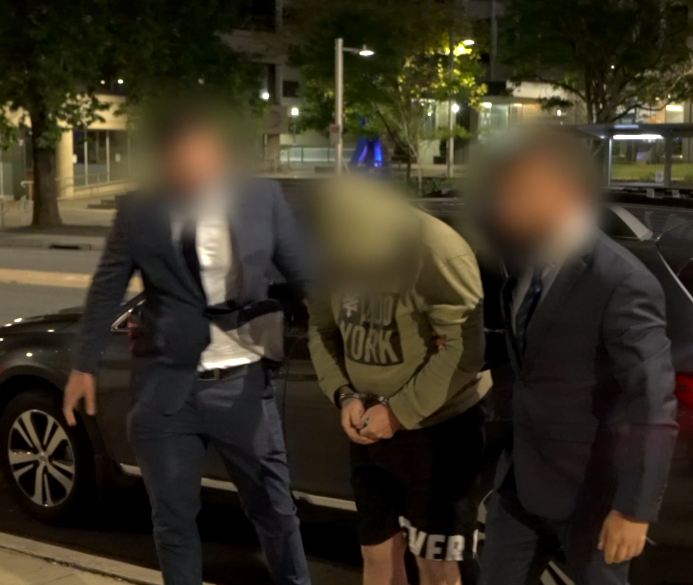 Ashleigh Wayne Wilson is arrested by police and charged with attempted murder over an alleged stabbing in Gowrie. Photo: ACT Police.

After allegedly stabbing his victim in front of the man’s mother, a Canberra man reportedly went on to boast about eating with the same knife.

Thirty-three-year-old Ashleigh Wayne Wilson and his nephew Andrew James Francis Beath-Williams, 23, allegedly enticed their victim to Gowrie last year and attacked him in retaliation for an alleged sexual assault against a person they knew.

Lured by the promise of a drug deal, the man was driven to the ambush by his mother.

According to the statement of facts in Mr Beath-Williams’ case, on 1 October 2020 the 23-year-old victim messaged a mutual acquaintance’s phone allegedly asking to buy cannabis.

Mr Beath-Williams was with the woman at the time and saw the conversation. He allegedly took the phone and began messaging the victim, telling him where the drug deal would take place and asked for details about his car, including which seat he would be sitting in.

That night, the two family members met up and Mr Beath-Williams allegedly told a friend: “My uncle Ashleigh is going to sell [the victim] the cannabis and I’m going to bash him”.

A screenshot of the carpark outside the Erindale Scout Group in Gowrie. Photo: Google Maps.

About 8:15 pm the victim arrived and parked at the agreed meeting place – the Erindale Scout Group carpark in Gowrie – in a car that was driven by his mother.

Mr Wilson allegedly entered through the back door of the car and used a knife to stab his victim in the neck three times, missing the carotid artery by 1mm, then Mr Beath-Williams allegedly threatened the man with a 20cm knife before assaulting him multiple times.

Mr Wilson also allegedly stabbed the victim twice in the left thigh and the duo demanded money from him, taking $110 in cash and a grey sports watch.

When Mr Beath-Williams entered the back seat, the victim’s mother drove off at speed, trapping him in the car until he managed to jump out.

The mother heard her son say “I think I’ve been stabbed” and they drove to a service station in Chisholm to find help while he coughed up a significant amount of blood.

Later, a person who knew Mr Wilson said he had boasted about eating with the same knife he stabbed someone with.

When interviewed by police Mr Beath-Williams denied any direct involvement in the stabbing, saying while he drove Mr Wilson to the meeting he stayed behind with the vehicle until his uncle returned.

Early in February, Mr Wilson was arrested in an outer suburb of Hobart in Tasmania then extradited to the ACT and both men have since pleaded not guilty to charges of attempted murder and aggravated robbery.

Mr Beath-Williams, a student from Wanniassa, appeared in the ACT Magistrates Court on Wednesday, 10 March, where he applied for bail, but was refused.

His lawyer, Darryl Perkins, argued there were special circumstances to grant his client bail, including a “medical situation” and the fact it would be some time before a trial could take place. He called on Mr Beath-Williams’ mother to give testimony.

She said her son had “shattered” his hip in a 2019 car crash and had trouble walking long distances as well as going up and down stairs.

She also said his mental and physical health had deteriorated since he had been in custody at the Alexander Maconochie Centre. When asked if she had other concerns about him being held in the centre, she said: “I’m his mother, so of course I do”.

But ultimately Magistrate Louise Taylor found he had not established special or exceptional circumstances and refused bail, with both men to next appear in court on April 27.

Mr Beath-Williams, a large man with light brown hair and a nose piercing, could be seen tearing up as he was led out of the courtroom.