An artist’s impression of Stage 2A at the intersection of Commonwealth Avenue with a raised London Circuit. Image: ACT Government.

Construction of the next stage of light rail is looking like being pushed back until 2022 due to the impact of the pandemic and the complexity of the project and approvals processes.

Transport and City Services Minister Chris Steel said the government was now not expecting to sign a contract for Stage 2A to Commonwealth Park with Canberra Metro this year and it was more likely to happen in the second half of 2021.

Mr Steel said the necessary Commonwealth and Territory approvals required before any contract could be signed would need to be obtained first and that seems unlikely to happen this year.

The government had hoped to begin work on Stage2A around London Circuit to Commonwealth Avenue in the first half of next year but Mr Steel said contracts for the raising of London Circuit, which will be the first major physical works of the project, were not expected to be signed until later in 2021.

But he said this also depended upon Commonwealth planning approval and procurement processes.

It had been thought Stage 2A would be up and running by 2023 and 2B two years later but that is looking increasingly unlikely.

Mr Steel said design and procurement planning activities were continuing for Stage 2B across the lake, focusing on some of the more complex areas of the alignment such as the light rail transitions to and from State Circle in Stage 2B.

Planning for Stage 2B also included assessment of infrastructure near Commonwealth Bridge and Lake Burley Griffin.

Early works including geotechnical and survey work were continuing along the Stage 2A alignment, and early utilities investigations were expected to take place in the first half of 2021.

”Stage 2A is being assessed by the Commonwealth through a Preliminary Documentation Referral Pathway under the EPBC Act and is currently in the final stages of determination with the submissions report lodged and a decision expected early next year,” he said.

”Planning approvals, including a Territory Development Approval and NCA Works Approval, will be undertaken as we progress Stage 2A.

”Stage 2B Commonwealth EPBC approvals will be assessed through an Environmental Impact Statement (EIS) pathway. Pre-application Development Approval and Works Approvals activities are ongoing with early analysis and assessments underway.”

Mr Steel reaffirmed the government’s commitment to light rail and said the election result meant it could progress the entire project as efficiently and speedily as possible but the government would not be rushed. 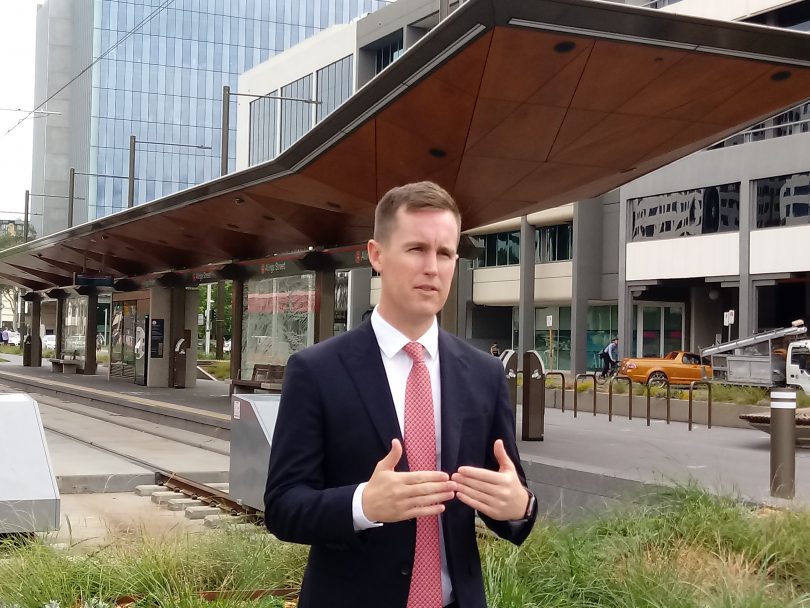 Transport Minister Chris Steel: ”We’ve seen what’s happened in other jurisdictions where contracts have been rushed for major projects without all necessary due diligence having been completed.” Photo: File.

”We are committed to getting this project right,” he said. ”We’ve seen what’s happened in other jurisdictions where contracts have been rushed for major projects without all necessary due diligence having been completed. We don’t want to find ourselves in the same position, so will be moving forward as quickly as possible, whilst considering all risk.

”Light Rail Stage 2 will be the most complex infrastructure project undertaken in the ACT. Before contracts are entered into we need to ensure approvals are in place, technical challenges have been resolved, contract terms are appropriate and all stakeholders have been fully consulted.”

”International elements of the project, including technical experts based abroad and overseas supply chains, are particularly susceptible to COVID-19 risks until a vaccine has been rolled-out,” he said.

In June, the government said the pandemic had disrupted the sourcing of rails and shut down the light rail vehicle factory in COVID-ravaged Spain.

It also said a rail boom had made for a hot, competitive market that was not conducive to the signing of long-term contracts.

Mr Steel said the government would also explore the feasibility of peak express services and extension of the line to Mawson as part of the Parliamentary Agreement with the ACT Greens.

”We are now considering the most appropriate approach to assess and address these commitments,” Mr Steel said.

The government has been lobbying for the Federal Government to speed up the approvals process and to help fund the project, particularly in light of its economic recovery program, but that has not yet borne fruit.

”The ACT Government would welcome the support of the Commonwealth to assist progressing this important infrastructure project for the people of Canberra,” Mr Steel said.

The three comments are all in line with the arrogant Stanhope perspective. They ignore that Labor won in 2016 on light rail, built stage one on-time and on-budget, and it has won ready acceptance.

At what point in time would all you instant MIT urban-transit PhDs stop ordering us back on to the buses?

Surely solving our hospitals’ problems is much more important than spending $billions on changing rubber wheels to steel wheels to provide a very pretty transport system that is much slower than we have currently and with only half the seats,

The government should reassess the project. Economic, financial and technogical changes could mean there are better, more cost-effective solutions to the transport and development decisions facing Canberra. It is doubtful that spending 2 to 3 billion dollars on the project will deliver as many benefits of investment in health,social housing and bus based public transport. Can the tram!

Yes, I’m sire thos has nothing to do with the woeful cost benefit ratio for the project and the parlous state of the territory’s finances.

What better time to throw billions at a useless project!!. Go team.