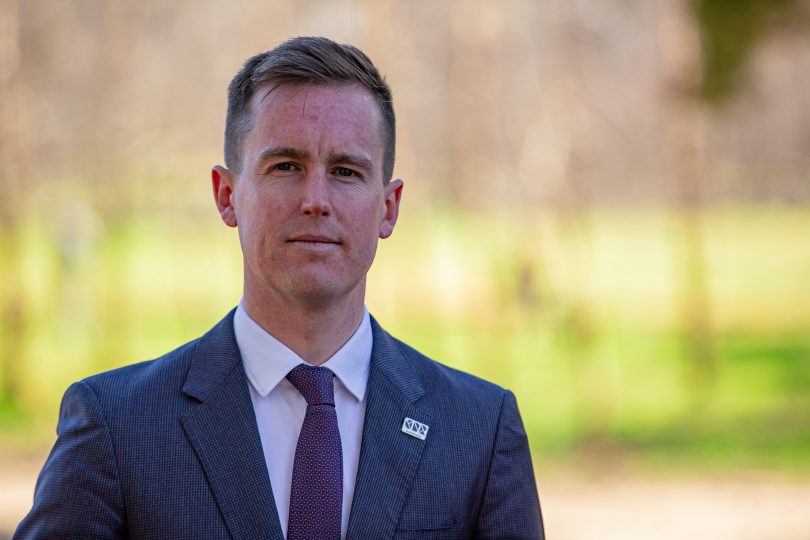 Mr Steel, who is in a monogamous relationship with a man, said the TGA’s decision was ridiculous and discriminatory. File photo.

ACT Government Minister Chris Steel said the ban that keeps gay men from donating blood for 12 months after having sex is discriminatory, calling for a Parliamentary Inquiry into the Therapeutic Goods Administration if it does not agree to a six-month deferral period.

According to the current policy enforced by the Therapeutic Goods Administration (TGA), the Australian Red Cross blood service will not allow a man who has had sex with another man, regardless of protection, to donate blood for 12 months.

The Blood Service has been deferring donors who declare a history of male to male sex since the mid-1980s, with the current 12-month deferral period introduced in 2000.

Despite the fact that all blood donations are automatically tested for HIV and other sexually transmitted diseases, the TGA knocked back a proposal by the Red Cross in 2012 to cut the deferral period to six months.

The TGA said its decision was based on expert advice that removing the 12-month ban “would be unlikely to provide a significant increase in blood supply”.

Mr Steel, who is in a monogamous relationship with a man, said the TGA’s decision was ridiculous and discriminatory.

“People are rightly asking why the discrimination still exists,” Mr Steel told Region Media. “On the face of it, it’s crazy that at a time when there seems to be a significant demand for blood products that we are excluding a significant portion of the community from donating blood when they seem to be in a low-risk group.

“For people like Ky Ruprecht, his partner, and myself, who have been in monogamous relationships for many many years, it seems strange that we are lumped in with people who are engaging in higher-risk sexual activity.

“There are some unanswered questions here.”

Australia first introduced the 12-month deferral period at a time when other countries had a lifetime ban on donations from gay men in monogamous relationships. However, while many countries are now scrapping that ban, Australia still continues to advocate for 12-month waiting periods.

The United Kingdom reduced its deferral period from 12 months to 3 months in 2017 and last year Denmark abolished the deferral period for men in monogamous relationships, in line with Italy, Spain, Portugal and South Africa.

Mr Steel said he will call on the Federal Parliament to conduct an inquiry into the TGA if it does not agree to the six-month deferral period the Australian Red Cross had suggested.

“We are seeing other jurisdictions from around the world change their policies quite rapidly,” Mr Steel said. “Since the 12-month deferral period came in 20 years ago, there has been a significant change in technology and we now have rapid testing for HIV.

“The deferral period does not need to be at the current 12 months. There are legitimate questions that need to be asked about why this discrimination still exists.

“At this stage, I cannot see any logical justification to have a 12-month deferral period.”

An Australian Red Cross Blood Service spokesperson said they are currently reviewing the policies on sexual activity deferrals and have established an external committee to provide advice to inform this review.

“We understand people are frustrated with blood donation rules relating to sexual activity and we are reviewing them again,” the spokesperson said.

“We previously looked to reduce the deferral in 2012, and our medical experts are currently considering the latest medical evidence and risk issues, including what our international counterparts are doing, in order to develop recommendations to be considered by the regulator (the Therapeutic Goods Administration) and governments.”

I’m from the UK and I can’t donate blood because of the outbreak of CJD (Mad cow disease) over 20 years ago. Does this mean, as I left the UK over 7 years ago, I can now donate blood? I think the answer is NO, why?

I was a regular blood donor for 5 years and I declared some swollen lymph glands at the time of my last visit. I still haven’t found out what the problem was but I was told not to come back.
I am not losing any sleep over it. The rules are obviously very strict but I am not setting myself up as being part of a victimised minority.

I would dispute the comment that this is a low risk group but if the screening process is sound then why not reduce the time period.

TGA are the very people who recently wanted to make possession of amyl nitrite (“poppers”) a criminal offence equivalent to heroin use. Maybe the airconditioning at TGA Symonston needs a good flushing, as there seem to be a few brain-damaged policy-makers out there

How does a disease affecting cows get transmitted to humans?

The human name for Mad Cow Disease is Cruxzfeld Jacob Syndrome. It is exactly the same and can be transmitted directly from cattle to humans. The virus stays dormant in the bloodstream indefinitely.

So, what sort of contact would one have to have with a cow to get infected; milking it for example?

I’m from the UK and I can’t donate blood because the UK had an outbreak of CJD (Mad cow disease) about 20 years ago.

Hey Chris Steel, sorry to trouble you with questions relating to your portfolio, but what are you doing about the 1 in 15 Action buses that don’t show up?

Good on you Chris. It is discriminatory and given the need for blood it makes perfect sense. 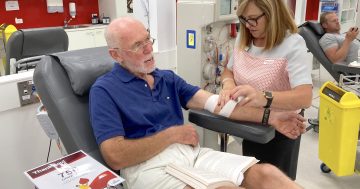