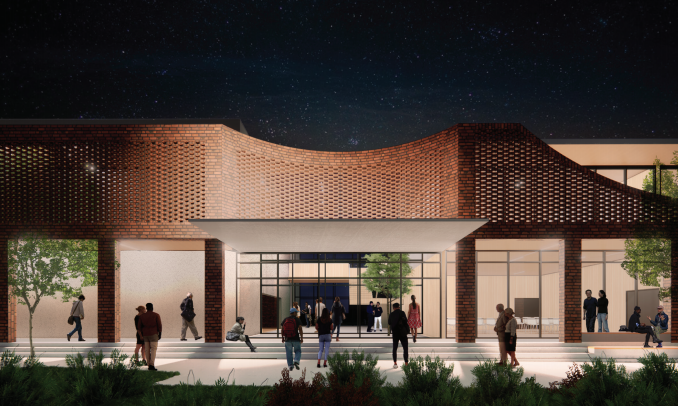 Canberra firm Stewart Architecture has been selected to design a new Performing Arts Centre for Daramalan College, which the school hopes to open in time for its 60th anniversary in 2022.

Principal Rita Daniels said the new building would be funded through the Dickson Catholic school’s Building Fund, although the cost was still to be determined, being at the concept design stage.

Ms Daniels said the building would have a foyer, drama performance space, drama and music classrooms, music tuition/practice rooms and a rehearsal space for school bands, as well as an office.

The drama performance space would hold about 200 people.

”It will provide a contemporary and coordinated space for Performing Arts subjects that are currently scattered across several buildings,” Ms Daniels said.

”Currently performances are held in the Hall which is heavily used for a range of activities so having some dedicated spaces will save time and energy in setting up and taking down equipment, and competing for times.”

The foyer area would also be useful for productions and performances.

Ms Daniels said the school wanted a contemporary building that would accommodate the needs of several subject areas that require a lot of specialist space that are not well catered for at present. 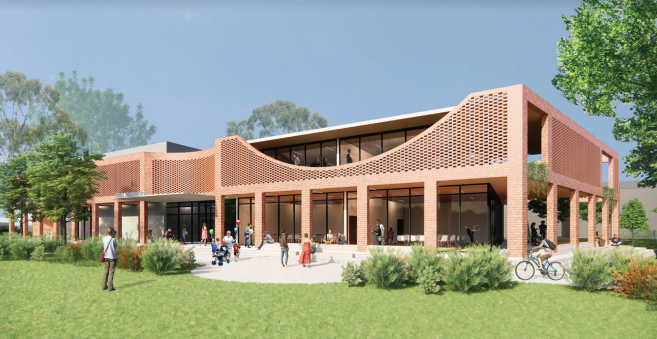 The two-storey design built on the language of red brick used throughout the school.

It needed to fit the available space and work in well with other buildings on the site, as well as adhering to sustainable and energy-efficient design principles such as incorporating rooftop solar and being orientated to the light.

Ms Daniels said that like Daramalan’s sporting facilities, there was potential for the community to use the centre.

Stewart’s winning pitch built on the language of red brick used throughout the school, presenting a contemporary two-storey building with a ‘performative’ brick facade, the firm said.

”We have a concept for a building and surrounding landscape which presents an exciting new venue for the school now and into the future,” he said.

Stewart Architecture presented a scheme which took the entire campus into consideration, anticipating the implementation of the Dickson Master Plan and better connections to the College across the Dickson drain.

The design includes colonnades and bleacher seating to the north and west fronting a revitalised Dickson drain area.

Stewart Architecture director Felicity Stewart said Daramalan College had a northern boundary facing the Sullivan’s Creek drain of nearly half a kilometre and there was an opportunity to transform the drain into a pedestrian and bicycle parkland, linking the new Dickson and Lyneham Wetlands.

”The new Performing Arts Centre has the potential to face on to this area, activating the public realm both day and night,” she said.

Stewart Architecture will now refine the concept, working with members of the College community to test the design and develop the scheme.

The building is expected to be completed by late 2022.

whatwik - 31 minutes ago
"And when these materials do arrive, they have been going missing from job sites, builders told Region Media" When our renova... View
News 10

Daniel O'Connell - 55 minutes ago
Greater costs for electricity to follow, just like the rises currently being arranged due to 100 percent renewables. View
Capital Retro - 4 hours ago
Bill Gates is the world's richest virtue signaler: https://www.cnbc.com/2021/02/14/bill-gates-on-his-carbon-footprint.html Li... View
HiddenDragon - 16 hours ago
Some cautionary words here about the limits of battery technology - https://www.abc.net.au/news/2021-02-16/bill-gates-zero-em... View
Property 1

Jacq Miller - 11 hours ago
shame there are no longer all 4 in situ View
Barry Matson - 14 hours ago
of what? View
Michael Guina - 15 hours ago
It has to start somewhere and those two buildings are living example . View
Lifestyle 13