Once upon a time the alleyway off Fat Bottom Bunda Street next to Blades was adorned by a large piece of wordy graffiti which showed a mangled version of Jim Morrison’s line from An American Prayer.

& that fat slow generals are getting obscene on young blood

It was up so long it should have been heritage listed but it smacked a little too much of free (if not original) thinking so it had to go and be replaced by something. 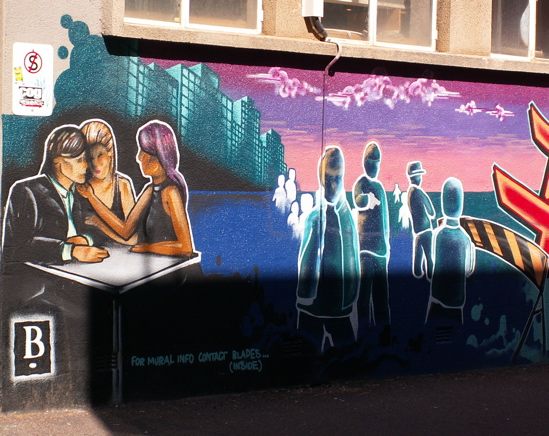 In the wake of this week’s controversies surrounding the destruction of public art by the Liberal MLA Steve Pratt simply because he doesn’t like it I thought this one was worth a look at.

I really admire the way it sends such a clear message of “Want to get girls? Better dress sharp!”. Blades wouldn’t have been allowed to put up a billboard this size but they’ve actually got some very powerful advertising going here.

I wonder what the reaction would be if the painting was of Elle/Kylie/Paris displaying their lingerie products?

Go to LA – Opposite the Chinese theatre/hollywood walk of fame etc – the whole side of a building – Elle in lingerie.

And it seems the Poms are following in our Pollies footsteps. A graffiti clean up crew painted over a piece of graffiti art – depicting the stars from Pulp Fiction holding Banana’s instead of guns – the artwork was estimated to be worth more than $700k’s

I wonder what the reaction would be if the painting was of Elle/Kylie/Paris displaying their lingerie products?

If it’s his wall, surely he’s legally allowed to have whatever he likes painted on it?

Ah it may have perished in our world but it lives on in glorious infamy in cyberspace:

So “Prout’s Ideology is Humanity’s Panacea” is also gone?

Having a motorcycle up until just recently I am very familiar with that piece of art and the surrounding art on other walls (motorcycle parking is up that alley). I have to say I really like it but even if I didn’t I wouldn’t be stupid enough to go ‘stupid graffiti whinge whinge whinge’. Surely even the authoritarian anti-liberal Steve Pratt wouldn’t dare to breach the sacred cow that is private property. Then again as a Liberal myself, Steve has been nothing but a complete embarrasment during his tenure in the Legislative Assembly, I wouldn’t put that kind of stooge stunt past him.

Jim Jim - 5 hours ago
Christine Hamilton because it is exactly as it happened to my mother. Your offence ignores the inconvenient truth...This is h... View
Candace Driscoll - 10 hours ago
It is so disgusting. The nurse called it the 'process' when my grandmother was dying. It is torture and you wouldn't do it to... View
Cheryl Thuillier - 10 hours ago
Legalise euthanasia, for peole with terminal diseases. View
Motoring 5

thebadtouch - 12 hours ago
And how long will this ridiculous requirement remain with us? Don't be surprised if you find the government still tracking yo... View
Julie Macklin - 13 hours ago
The same as what happens to ACT people who visit another state and don't have their app. They sign you in, as happened when I... View
Alley Hunter - 17 hours ago
Marjeta Marks then it's up to the business to sign you in using their business account View
Property 25

chewy14 - 16 hours ago
BJ, I agree its not good for anyone to have a significant amount of apartments empty. Governments, both local and Federal sho... View
bj_ACT - 20 hours ago
I think we must both be misunderstanding each other. I wasn’t saying you were wrong, just surprised by your views. Personal... View
News 28

Natalina Ireland - 18 hours ago
So many contradictions in one statement!! I hope your friend gets an answer that actually makes sense 🤪 View
What's On 7

AuntieTruda Verkleinern - 19 hours ago
She is beautiful. We saw her over Lawson this morning! View
Samantha Warburton - 22 hours ago
Dale Warburton View
Sport 27

Fiona Lovegrove - 21 hours ago
How did I miss This article? Great piece about a great friend 😁 No mention of the Pot Belly incident lol View
Food & Wine 11

Kristin Smith - 1 day ago
Yumyumyumyumyum!😍😋 I've always loved the food - and the doughnuts are next level! View
show more show less
*Results are based on activity within last 7 days

A Canberra father accused of repeatedly beating his wife and choking their daughter will be released from custody after he...
Opinion 7

@The_RiotACT @The_RiotACT
Canberra's Kirrah Amosa has taken a big step towards her 'Usher moment' as a standby for three roles in the powerful Australian premiere of the musical Hamilton https://t.co/bSmDqncgXV (8 hours ago)

@The_RiotACT @The_RiotACT
Two rock-wallabies, described as 'bouncing popcorn', arrived on a repatriation flight of a different kind with a mission to boost the ACT's dwindling macropod population https://t.co/gucLXqnsO7 (9 hours ago)

@The_RiotACT @The_RiotACT
Canberra motorists with faulty Takata airbags could have their registration cancelled or suspended if they don't take action to have them repaired by 6 April https://t.co/gYWipRkice (10 hours ago)