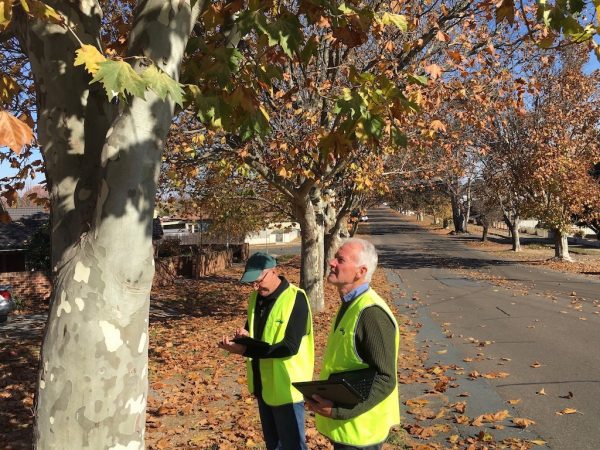 Look for gums says nurseryman Doug Rawlinson when I begin my search for Goulburn’s oldest tree.

Mr Rawlinson says the biggest and oldest tree in the district could be a 600 year-old eucalyptus out past the Braidwood Road. On his place, Kentgrove homestead, stand two 300 year-old gums.

Long gone are the two gum trees the whole of ‘old’ Goulburn was surveyed off near the railway line, Mr Rawlinson says.

Imagine if you had the history of every street tree in Goulburn? Well, in six or seven years time, Goulburn will have such a record.

Street trees are being identified and mapped with precision. All 12,000 of them, and already we know probably another 12,000 gaps remain along Goulburn’s streetscape, where trees once stood.

The groundwork is underway to plant replacements, an exciting prospect given street trees add value to the homes they shield, the traffic they calm and habitat they provide.

This remarkable turnaround contrasts with a few short years ago when an old tree, no matter how elegant or shady, that grew out of line in Goulburn’s central business district was cut down or trimmed within an inch of its life.

The tide turned quickly when Goulburn resident David Mullen raised the idea of a voluntary street tree working party with Mayor Bob Kirk. With an eye for a greener future they set off, one driving, one with pen and paper recording the trees. Three more volunteers, Wal Smart, Rob Lance and Fred Rainger, have since joined them.

As falling fiery-coloured leaves from pin oaks, liquid amber and elms carpet nature strips Mr Mullen and Mr Smart are left in no doubt how people feel about their trees.

“Walking around with this (high vis jacket) on people see you looking at trees, come up and say ‘what are you doing? You are not going to cut that tree down are you?’ ’’ says Mr Mullen.

Goulburn Mulwaree Council’s tree budget is growing. From $31,000 in the 2014/15 financial year, the allocation for the 2017/18 financial year will rise to $466,500, including $350,000 for the one-off riverside walkway. The remainder will be spent on the Avenues of Honour project, northern entrance to Goulburn, and continuing street tree planting throughout the shire. (A separate group including RSL sub branch members is responsible for avenues of honour.)

The street tree volunteers bring with them professional qualifications. Mr Lance taught agriculture and horticulture at Goulburn TAFE college. Mr Mullen has degrees in agricultural and rural science. Mr Smart has a diploma in horticulture.

These days they have council-issued iPads loaded with Intramaps Roam, a software data collection program council’s information technology staff configured, which places a green dot for each tree on a map of Goulburn, and a blue dot where a tree should be.

Date of planting, health, diameter, height, structure, pruning, and proximity to powerlines and drains are being added, creating a history of each tree which is becoming a valuable asset for Goulburn. Information on old, diseased or damaged trees to be replaced or pruned will guide an annual works program to maintain and enhance Goulburn.

Mr Smart says the data will help avoid damaging trees when maintaining services under and above the ground.

Mr Mullen adds: “A good example was in Deccan Street about 10 years ago, a deep trench went alongside plane trees and they suffered after that. That is part of management, when engineering works are scheduled, a tree guy will check on the trees.

“Our four (working party) people will take six or seven years to do the whole town, but it is such a huge management job that we have all agreed it will require a full-time council staff person just to manage trees,’’ Mr Mullen says.

“ Any time a tree is worked on, pruned, what ever it will eventually go into this (inventory). If someone complains about a tree you can’t just send someone to rip it out. You need a person to assess whether it is appropriate to rip it out and how to do it,’’ Mr Mullen says.

“We are following the lead of other councils,’’ he says. “Albury began this sort of thing 10 or 11 years ago, they have been developing it ever since.’’

Guy Manton - 11 hours ago
Don't know why she claims she doesn't fit into standard liberal party box. All her positions are the exact same as the existi... View
John Moulis - 12 hours ago
I've been a lifelong supporter of the Coalition parties but after reading this I now go on record as saying Vote Labor. View
Monty Ki - 16 hours ago
We really need to be voting for progressive, inclusive and evidence-based, rational and logical politicians. While they are f... View
News 31

Max Leonard - 13 hours ago
That is ridiculous. The Sydney Melbourne air corridor is the second busiest in the world. Of course we need HSR. The Grattan... View
News 20