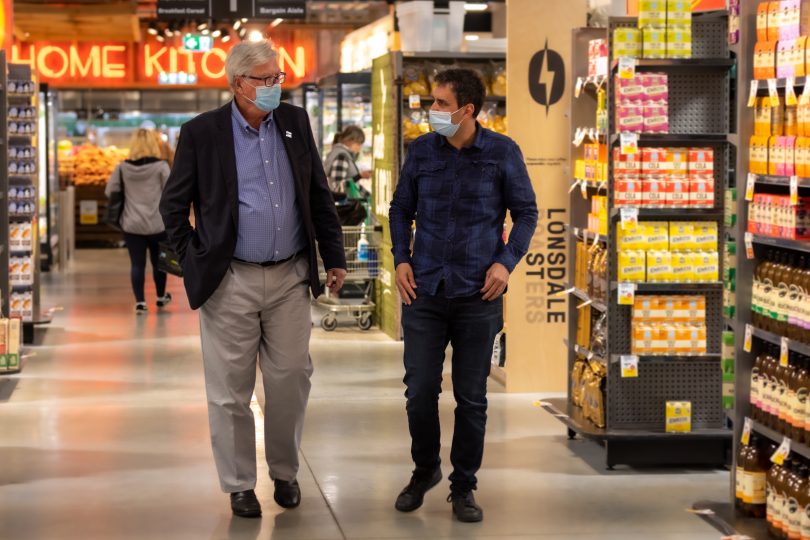 If you’ve been shopping at Supabarn supermarkets lately, community foundation Hands Across Canberra would like to say thank you.

Customers at the homegrown supermarket chain have helped to raise more than $14,300 for local charities through their Supahands campaign – a contact-free donation online or instore at participating Supabarn locations.

Hands Across Canberra says the money raised comes at a time when help is urgently needed in the Canberra community as the second ACT COVID-19 lockdown has taken its toll on vulnerable people.

Recent research from the Australian Council of Social Service and the University of NSW shows that although in 2020 robust additional COVID-19 income supports enabled many people who were out of paid work to cover the basics, most people on the lowest income support payments have been denied extra support in 2021.

The end of COVID-19 Disaster Payments when Australia reaches its 80 per cent vaccination target is likely to mean the people most deeply impacted by the 2021 outbreak of the virus face a highly uncertain road to financial recovery, according to the research.

Hands Across Canberra CEO Peter Gordon says this time around, Canberra’s charities have noticed that needs have changed. During the initial lockdown in 2020, charities were hit hard by the lack of fundraising opportunities and increased public demand.

The call is for food, rental assistance and essential supplies as government support has changed and many more businesses and employers have been hit hard by the Canberra outbreak of COVID-19.

“This assistance could not have been better timed,” says Peter. “Recent events have resulted in a higher demand for services from charities and community organisations working with our most vulnerable people.

READ ALSO: Poverty in the ACT is closer to home than you might think

“These charities are having to adapt quickly, and support people in new ways, ensuring basic needs are met.”

Hands Across Canberra released two rounds of funding from the ACT Chief Minister’s Charitable Fund in September 2021, and Peter says this reflected the level of need in the community.

Hands Across Canberra is now asking ACT residents to ‘give where we live’, and the Supabarn fundraising has been most welcome.

“Supabarn committed to the cause early on and actively worked with us to raise additional funding so we can get it to where it is needed most,” says Peter.

The fundraiser was launched on 24 August and ended in early October.

Supabarn general manager Theo Koundouris thanked customers and the wider Canberra community for their support during the appeal period.

“It’s a heartwarming feeling to see our Canberra community supporting each other in our time of need,” he says.

“I don’t think there is anyone who hasn’t felt the pressures of lockdown in some form during the past months; however, some have had to face harder struggles than others.

“To see many of our customers giving what they can to help is a wonderful thing for us to witness and be part of.

“We’re also thankful to Hands Across Canberra and the many charities they work with for the amazing work they do.”

Alex Kerr - 39 seconds ago
Jack aye look at that View
Kevin Hingston - 7 minutes ago
Shane Jasprizza it’s not just pure greed. The supply side cost has gone through the roof last two years. I’m told the inc... View
Fred Pilcher - 20 minutes ago
What took them so long? View
Sport 2

Nicole Thomas - 2 minutes ago
Michelle Bailey is in this article along with Zach. 👍 View
News 5

Helen Kvalheim Stephenson - 10 minutes ago
Since when does this opposition care about anything! This is just a ploy! We know what you’re really like! View
Dean Colwill - 43 minutes ago
Simplify the curriculum and get back to basics maybe. View
Lynn Nicholas - 52 minutes ago
Jimmy Stewart lack of choice perhaps View
News 2

nobody - 41 minutes ago
It’s time the regime came clean and explained to the people of Woden exactly why their pool is closed this summer. View
bj_ACT - 2 hours ago
Woden has lost so many sporting and public facilities over the last couple of decades. The Tuggeranong ice sports facility is... View
Courts & Crime 9

Chris Cummins - 2 hours ago
Rob Calvert priorities vs funding. Complain to government. You complain of poor service - I gave you Ann important example of... View
Rob Calvert - 2 hours ago
Chris Cummins What's that got to do with the failure of the the police to respond to burglary, minor assaults, their failure... View
News 19

Paul Magarey - 3 hours ago
If they can pay tax, they should get to vote. No taxation without representation! View
Capital Retro - 3 hours ago
"Most of the boomers on FB have no clue how the world works." Typical of the contempt we receive from young people these days... View
Geoff Roberts - 4 hours ago
Just an overt ploy to ensure the Greenies increase their vote and power. Absolutely NOT. View
News 36

Robert Hawes - 3 hours ago
The police should have one number to call, not three. They are blaming the public for something that is their own fault. View
News 76

Lazarus Taxa - 5 hours ago
Its about time the police were honest about their roll, they are not here to solve crime or protect you , they are here to ra... View
Property 5

Karen Thomas - 5 hours ago
What happened with the conema that was meant to go above kmart, should of just kept the one that was in main street years ago View
show more show less
*Results are based on activity within last 7 days

Helen is living her best life during lockdown, with your help

@the_riotact @The_RiotACT
Threads of Policing is a new #exhibition at @_CMAG_ that shines a light on the heroic work of the @AusFedPolice, with rare exhibits on display until March 2022 https://t.co/0u4b34HFGW (52 minutes ago)

@the_riotact @The_RiotACT
New laws have been passed in the ACT Legislative Assembly that give greater protection to off-the-plan homebuyers from #developers wanting to rescind #contracts https://t.co/3qrzNvWaiE (2 hours ago)

@the_riotact @The_RiotACT
The government has shot down an attempt by the Opposition to get the working conditions and pay of ACT public school teachers referred to the Fair Work Ombudsman https://t.co/ZgMX2HaSpE (3 hours ago)