Creating an architecturally iconic Canberra for residents into the future
geocon.com.au
19 August 2021

ACT Policing engaged with the allegedly stolen vehicle as it was driven through Belconnen and north Canberra. Photo: File.

A police car has allegedly been deliberately rammed by a driver in possession of a stolen vehicle in Queanbeyan early this afternoon.

It’s alleged the driver of the 4WD ran from the scene before being arrested a short time later.

The grey 4WD utility was identified in Mackellar on Thursday (19 August) at around 11:30 am by ACT Policing General Duties officers.

A spokesperson for ACT Policing said that officers engaged the vehicle a number of times across multiple Belconnen and north Canberra suburbs but were repeatedly forced to disengage due to erratic driving by the 4WD.

Later this afternoon, the vehicle was located in Queanbeyan by a Road Policing officer driving an unmarked police vehicle.

After the alleged ramming, both vehicles came to rest in the front gardens of adjacent homes on Southbar Road.

The spokesperson said the driver is now assisting police with enquiries, and charges are expected to be laid.

Anyone who witnessed or has dash-cam footage of a grey Ford Ranger driving erratically after 11:30 am today is urged to contact Crime Stoppers on 1800 333 000 or visit www.crimestoppers.com.au.

So who’s court will be eventually responsible to hear him ? as the episode started in the ACT and finished in NSW.

I bet I know which one he’s hoping to appear in , and it wouldn’t be any of the hundreds of courts in the whole of NSW..

Since he jumped the border, how about a kangaroo court!

Well that’s simple, the ACT offences get dealt with in the ACT Court system, the NSW offence in NSW.

Hmm, so will this creep get a harsher sentence for auto theft or breaking COVID rules?

What a muppet. No key required. 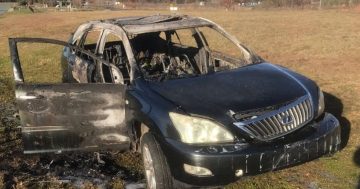