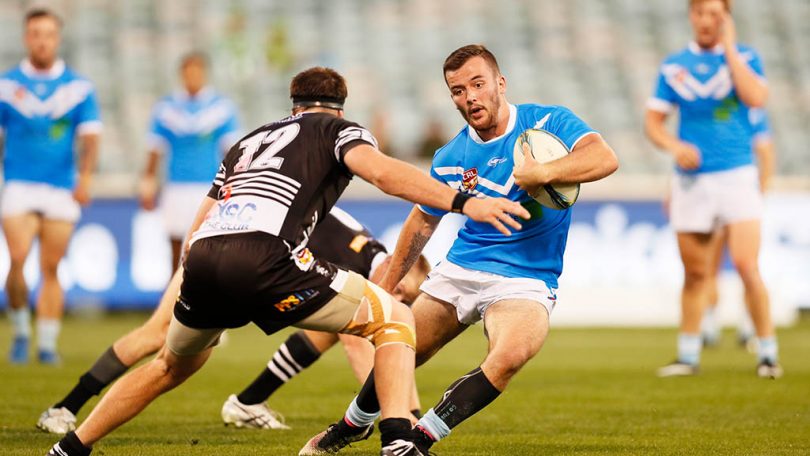 The penalties from last Thursday’s match were handed out after the judiciary met on Wednesday night (11 April). Photo: Supplied by CRRL.

Punishments from the all-in-brawl that marred the Canberra Raiders Cup season opener at GIO Stadium on Thursday night have been handed out with seven players copping suspensions.

A biff that saw five players sent to the bin detracted from the season opener that saw reigning premiers Queanbeyan Blues defeat the Yass Magpies in an entertaining affair.

Campese, Wheeler, Cullen, Edwards and Warner were all sent off in the game which was played as a curtain-raiser to the Raiders clash with the Bulldogs.

The penalties from last Thursday’s match were handed out after the judiciary met on Wednesday night (11 April).

Mitchell Edwards, Terry Campese and Jake Wheeler will all miss one match after the judiciary took into consideration discounts for good behaviour over the last two seasons and players taking the early plea.

Magpies’ Benny Warner will miss five matches after his suspension was increased due to other offences in the last two seasons. Warner also received a discount for taking the early plea.

Blues lock Aisea Taholo was sent directly to the judiciary and will miss three matches while teammate Michael Cullen is out for two.

Willie Peace is set to front the judiciary next week where his suspension will be determined.

Canberra Region Rugby League general manager Mark Vergano said that he agreed with the referee’s decision to send players from the field and supported the judiciary’s final decision.

“The actions displayed last Thursday night were unacceptable,” he said.

“We fully support the referee’s decision and will ensure this kind of behaviour is stamped out of our game.”

Chrissto Melba - 4 hours ago
If that is what the Sports Commission recommended, I'm fine with it. But apparently70% of the fund the Minister allocated wer... View
Margaret Freemantle - 10 hours ago
McKenzie needs to resign. Whilst Morrison is a dreadful PM, with the loss of his father, it would give him a little time to g... View
Tom Porter - 11 hours ago
Were they all approved by the Sports Commission? View
News 25

“Soft” Raiders eager to show their tough side against Canterbury

@The_RiotACT @The_RiotACT
RT @JesMullins: My friend cycles 500km in 5 days to raise money for charity. This year he has arranged for orgs to match funds raised $ fo… (5 hours ago)