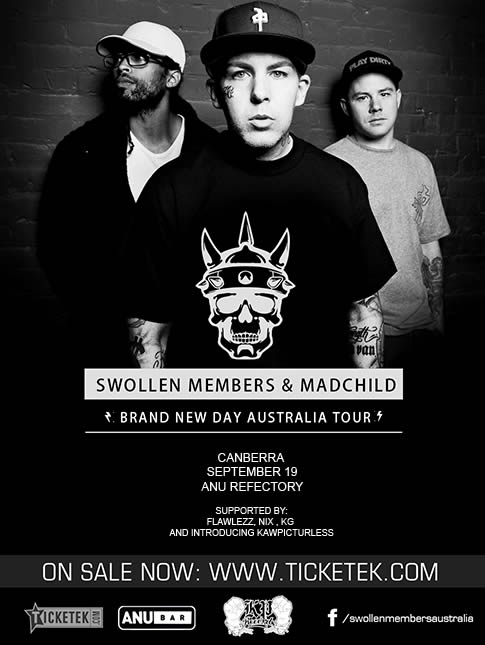 Formed in 1992 the golden era of hip-hop Swollen Members released countless successful albums and collaborated with the likes of Jurassic 5, Nelly Furtardo, Everlast and Dilated Peoples.

In 1996 Swollen Members where initiated into the Rock Steady Crew.

Swollen Members is one of only three rap groups affiliated with Rock Steady, others include Dilated peoples and The Arsonists.

Flash forward to 2014 where social media dominates and many rap groups from the Golden Era have struggled to maintain popularity.

Swollen Members have rejuvenated a stellar career amassing over 50million PLAYS worldwide on youtube and hundreds of thousands of facebook likes.

On top of the groups success Madchild has taken his solo career to new heights with countless viral hit singles, several impressive album releases and an impressive outing in the KOTD rap battle league which saw him take a memorable WIN.

No stranger to touring Swollen Members have taken to the road for over 50 dates across the USA and have now announce a much anticipated headline tour of Australia.

With the release of their new album “Brand New Day”, Swollen Members have taken back control and re-launched their label Battleaxe Records.
The label was one of the hip-hop’s premiere independent record labels, now re-launched by artists that have a desire to return hip-hop culture to its rawest form.
The reason why countless fans have the Battleaxe skull logo emblazoned on their body is that it represents a common bond for like-minded individuals who live their life with a passion for art, music, and culture.

They are all part of a growing movement that is taking over.

Fans from the Golden Era, dedicated fans enthusiastically titled warriors and fans from the new generation do not miss what promises to be the live hip-hop tour of the year!

Visit www.facebook.com/swollenmembersaustralia for all tour information.

Martyn Noakes - 50 minutes ago
Brian Ashcroft have you been along the cycle track along the creek in Evatt and Flynn, huge eucs with deep roots in covered a... View
Chris Montgomery - 2 hours ago
Brian Ashcroft they only blow over cause their root system is higher than they should be. Most eucs that blow over are on fro... View
Chris Montgomery - 2 hours ago
Gertraud Bell All the big Eucalyps were there before all the housing went in. So??? your saying to remove all native trees an... View
Sport 1

@the_riotact @The_RiotACT
Meet Joel Tyrrell - who after touring the world playing #music is now operations manager at the new @TransitBar https://t.co/v9SjttwQjF (29 minutes ago)