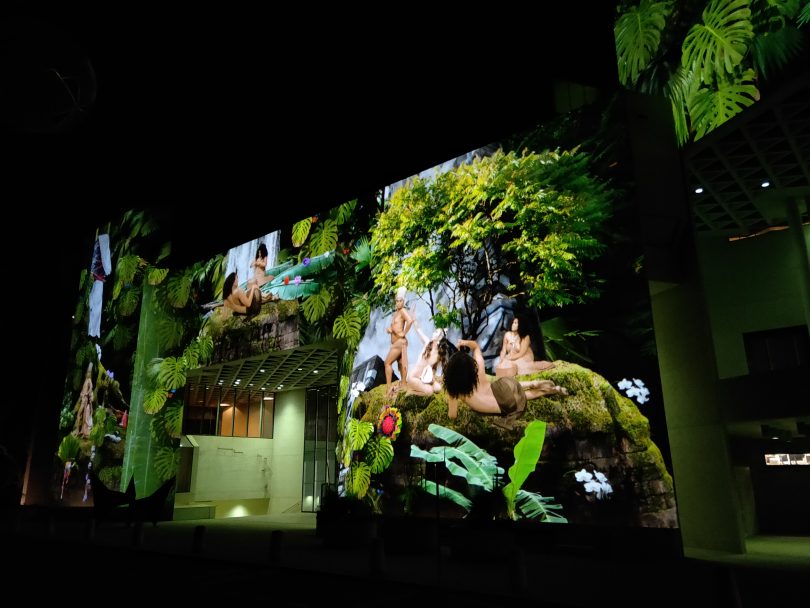 In Muva We Trust will be projected on to the walls of the NGA for Enlighten Festival. Photo: Region Media.

The National Gallery of Australia is welcoming a major new commission this week, and it’s going to be rather hard to miss.

Club Ate, a collective of Sydney performance artists, is set to unveil its brand new work In Muva We Trust, a monumental video projection that will enliven the gallery’s iconic 60-metre-tall façade throughout the Enlighten Festival.

The National Gallery of Australia, Canberra is awash with mountain streams and lush jungles as Filipino Australian artists Club Ate create a digital skyworld for Enlighten Festival. The festival is lighting up the national institutions from Friday onwards and the NGA has commissioned a major work for the event.

Posted by The RiotACT on Wednesday, 26 February 2020

“In Muva We Trust animates mythic ancestral beings and landscapes to envision new forms of motherhood, community and ecology,” says Club Ate artist Justin Shoulder. “It asks the question: ‘in the face of an uncertain future, how do we, as queer communities of colour, cultivate hope and create possibility?’” 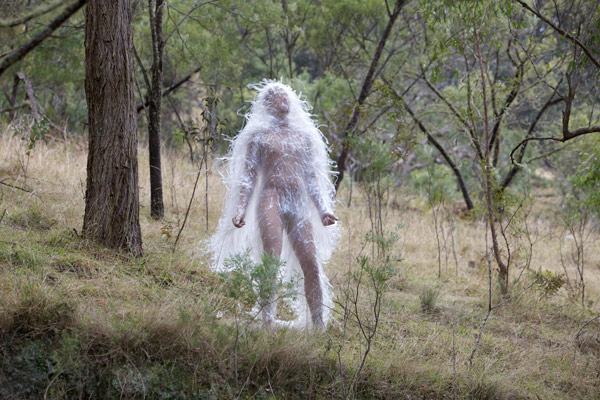 Justin Shoulder for I am raining. Digital photograph by Mat Hornby.

With this new work, Club Ate draws from the shared Filipino-Australian heritage of its two artists, Shoulder, and creative partner Bhenji Ra. Both are interdisciplinary artists, creating across video, sculpture, performance and club events, and much of their practice explores the intersections of these seemingly disparate mediums.

In Muva We Trust will use the stark, brutalist exterior walls of the National Gallery as a canvas over 11 nights, showing projections of bodies and water, and creating a spectacular moving landscape.

Along with the new commission, Club Ate is curating Club Muva, a one-night-only event experience. Club Ate’s focus on community activation often manifests itself in the form of balls, pageants and club nights, and Club Muva will merge various club and cultural traditions with subcultures such a vogueing and Australian Ball. It all comes together in a unique event that responds to the art projected high above on the walls of the NGA. 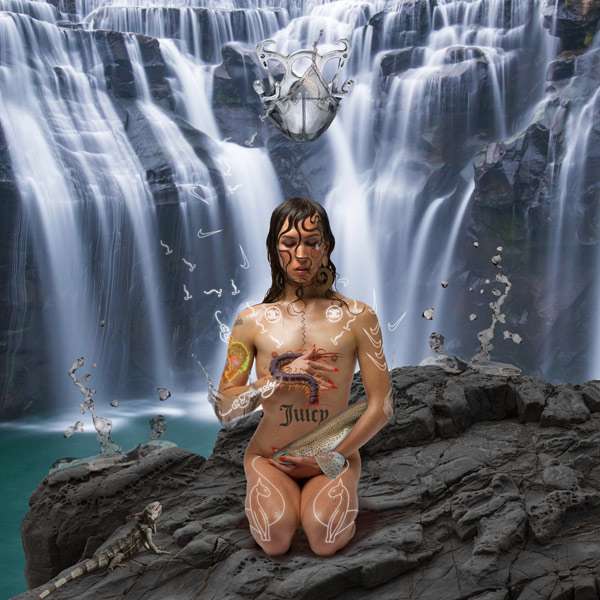 “Club Muva is a nurturing space for expression,” says Bhenji Ra. “Modelled on our performance pageants, this will be an intergenerational community dance party that is really about reimagining traditional narratives and what it can mean when bodies of resistance come together as a collective – both to resist, but also to celebrate identity.”

Club Muva, which will take place on Saturday, 7 March, will see Parkes Place graced with a procession of Asia-Pacific artists from both Canberra and Sydney in an expression of inclusivity towards queer and diasporic communities. 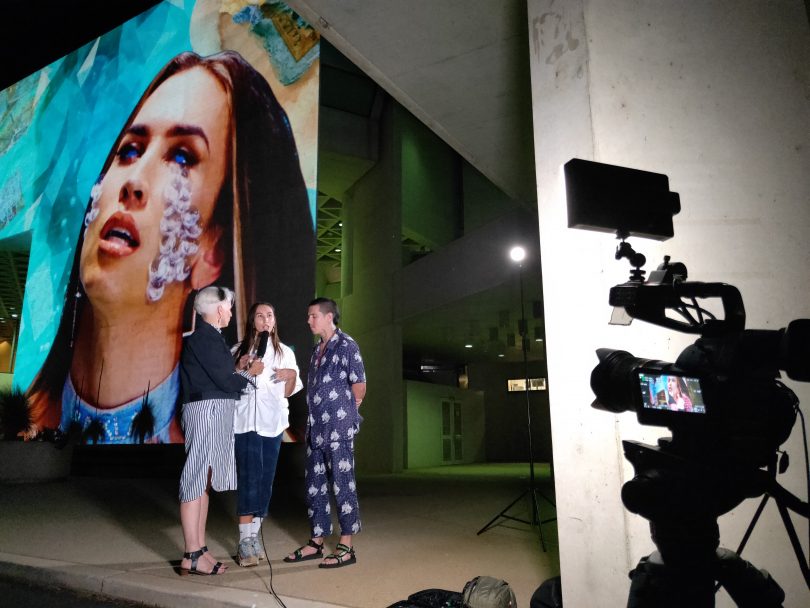 It all comes in the context of a renewed commitment from the National Gallery to supporting contemporary artists. 2019 saw Indigenous artist Tony Albert’s I Am Visible lighting up the exterior walls of the Gallery, while in 2020 Know My Name showcases art made by women from 1900 until now.

This new commission follows on from Ex Nilalang, a video series created by Club Ate and shown inside the NGA in 2018. The series explored many of the same themes as In Muva We Trust, intersecting with mythology, pop culture and the lived experience of its artists. 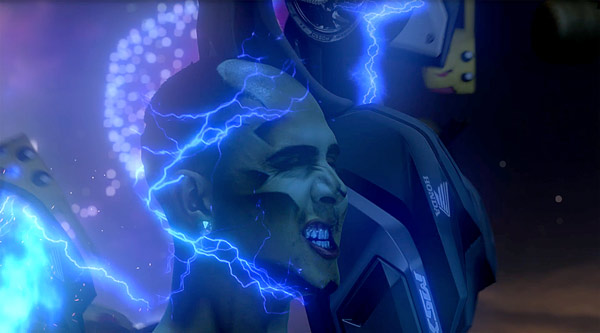 franky22 - 7 hours ago
Quick work by ACT Police - only 3 months ago. View
Property 6

Capital Retro - 8 hours ago
So, it will be called the "Opal of Colour"? Ridiculous.... View
Andrew Dale - 16 hours ago
Rory Bourke I'm both mate 🥸🥴 View
Lucas Anasdow - 18 hours ago
The Left are pushing to have the Event Renamed as the Term 'Black' is deemed to offensive and upsetting for segments of the C... View
News 32

Ashley Wright - 10 hours ago
Jennie Smith vast majority of the tram works were done in the median strip of flemmington road with minimal impact. There was... View
News 5

sisyphus - 11 hours ago
Better still, read some up-to-date peer-reviewed research. That film is primarily attacking historical straw men, presenting... View
jwinston - 18 hours ago
Watch “The Planet of the Humans”, a documentary by Michael Moore, to see the lie of renewables and so-called green energy... View
News 4

Robert Hawes - 11 hours ago
Should be done via the nurse walk-in centres. View
Lyn Christie - 16 hours ago
Ian E Wheeler maybe somewhere you can register if you don't see community nurse and are unable to get out to receive the shot... View
News 22

JC - 11 hours ago
Actually think you will find this “outcome” actually backs up my comments. Do you think both parties came to a $400,000 a... View
chewy14 - 12 hours ago
JC, The other week you were claiming the silence was due to pending litigation which now as we see (and I said) was false. Th... View
JC - 13 hours ago
Life doesn’t work like that. It’s quite clear that for the last year they have been in dispute with the builder over this... View
Community 20

A Canberra father accused of repeatedly beating his wife and choking their daughter will be released from custody after he...
Breaking 2

ACT Policing has released a video to help identify people involved in an incident that took place in Civic at...

@The_RiotACT @The_RiotACT
Spacey Jane returns to Canberra this weekend, playing two massive shows under the lights of the @canberratheatre. Find the details in this week’s #GigGuide, which features all the best shows in town https://t.co/MNHOt93RAV (8 hours ago)

@The_RiotACT @The_RiotACT
Joshua Higgins has pleaded not guilty to murdering Gungahlin man Jae-Ho Oh after a late-night fight on Canberra Day 2019. Please be careful with your comments, this is an ongoing trial https://t.co/iEO6xJF7hL (11 hours ago)