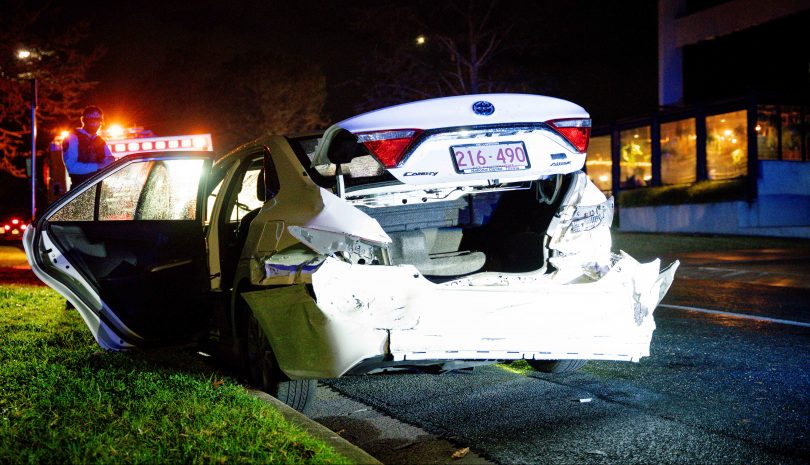 The rammed Toyota Camry was being used as a prison transport vehicle. Photo: ACT Policing.

Charges of escaping from lawful custody were laid after police apprehended a 28-year-old man who had escaped from ACT Corrective Services custody on Friday afternoon. He was allegedly located in a Lyneham roof after police acted on information received from the public.

A 28-year-old Hackett woman has also been charged with three counts of assaulting frontline community service providers, dangerous driving, driving while suspended, taking a motor vehicle without consent, not giving particulars to the other driver after a crash, and damaging property.

Police say that investigations into yesterday’s events are continuing.

10 July, 6:00 am: A short-lived prisoner escape has ended after a 28-year-old detainee, described by police as having a distinctive rat’s tail and tattoos, was allegedly found hiding in a Lyneham house roof at around 9:00 pm on Friday night.

ACT police have described the escape and subsequent search as “a little bit like a scene out of a Hollywood movie”.

The drama began at around 4 pm when a Jeep rammed into an ACT Corrective Services vehicle that was being used to transport the man from the Alexander Maconachie Centre to the Canberra Hospital.

Police said the prisoner, who was handcuffed at the time, fled the scene with a woman. The Jeep was later found alight in Forrest and police appealed for help from the public as a search was mounted.

The man was described as having a distinctive “rat’s tail” at the back of his head, being about 193 cm tall and of Caucasian appearance, with brown hair, hazel eyes and tattoos on his right upper arm.

Information from the public led police to a house in Lyneham where the man was allegedly found hiding in a roof space.

“Specialist negotiators facilitated the safe surrender of the man at about 9:00 pm,” ACT Policing said in a statement.

“Two females, believed to have been involved in the escape, were also arrested at the Lyneham house”.

All three people have been transported to the ACT Watch House and will appear in the ACT Magistrates Court on Saturday. Police said investigations are continuing.

ACT Policing has thanked the public for their cooperation and assistance during the operation.

Some dash-cam video of the incident. Still waiting for the RiotACT to ask the Minister why this family sedan was being mis-used for this purpose, despite a report describing it as unfit for this use.
https://www.youtube.com/watch?v=qHLv5rnxTzs

CCTV footage on the News doesn’t paint a very heroic picture. ACT corrective services guard had hold of the prisoner and then let him go. If cowardice was an Olympic sport that guy just got gold!

FUBAR. This regime received a report from the ACT Inspector of Correctional Services in November 2020 about the Court Transport Unit, which says on page 18 –

“During the review, the CTU received a Toyota Camry to replace their eight-seat Toyota HiAce van (Romeo 1). ACTCS advised the review that the vehicle was ‘purchased specifically for detainees at risk of suicide or self-harm…’ and that ‘the seating configuration is driver, and two staff in the back seat on either side of the detainee.’2
The Corrections Management (Escort) Policy and Procedure 2017 specifies that detainees at-risk ‘due to suicide or self-harm concerns must be escorted in a sedan or station wagon’. However, CTU officers believe the Toyota Camry is too small in situations where staff need to wear bulky personal protection equipment (PPE), such as body pads, on escorts of potentially violent detainees. One officer described it as ‘unfit for purpose’.
In reality, and even leaving aside the PPE issue, a Toyota Camry is a mid-sized family car with a back seat that would be a tight squeeze for three average size adults. It is unclear to us why an at-risk detainee could not be transported safely in a larger-seat capacity vehicle that would provide more room for the detainee and safe-distancing of staff. Further, as the Camry is unsuitable as a general-use escort vehicle it may end up being underutilised and poor value for money.
Due to the evident unsuitability of the Camry, the CTU reverted to using the old Romeo 1 Toyota HiAce even though it had partly been stripped of its ACTCS decals. The future of the Camry was unknown at the time of writing.”

Nice work ACT Police.
Not so sure about ACT Corrective Services. If it’s that easy, just give the detainees a bus ticket next time!

Yet another example of the piss poor way this place is run.

I have a couple of questions. My understanding is that prisoners don’t know, or aren’t supposed to know, when they have appointments outside of the jail because it increases the escape risk. So how did this bloke and his accomplices know?

And why wasn’t a caged vehicle used for transporting the prisoner instead of a family sedan?

Malcolm Roxburgh - 25 minutes ago
The ACT did NOT vote for self government be Liberal or Labor. View
JC - 49 minutes ago
They did tell people. They had electronic signage weeks either side of the change and they have 3 months grace. As I said to... View
JC - 52 minutes ago
It was more than a month ago the limit changed. When they made the change they gave 3 month grace of not fining anyone. View
Community 97

@The_RiotACT @The_RiotACT
Can you really train a dog to love the 'cone of shame'? Or a horse to come when called? Sure can! Jade Fountain's even trained chickens and orangutans, and become mates with a hippo! https://t.co/DJk7lcjDGs (30 minutes ago)