Today’s adventure was inspired by my walking companion, who is staying in Kambah and suggested that we tackle the track and hill closest to him. Having recently walked the picturesque Cooleman Ridge Nature Park trail, which extends all the way from Weston Creek to the north-west end of Kambah, it seemed like the perfect continuation of my earlier adventure.

Heading off up Heke Street before turning left on to a dirt track that follows the house line at the back of Allchin Court, we soon reached a small carpark and paved area leading to Mt Neighbour Horse Holding Paddocks. Taking care not to spook the horses in a nearby paddock, we hopped through the gates and rejoined the dirt track that leads around the back of McQuoids Hill.

As we made our way around the track and the tree line opened up, we were treated to stunning views of the Brindabellas and beyond. At this point the track was flat and wide, so we were able to stroll easily while enjoying the sunshine and views. We followed a fence line that separates the Nature Park from Rural Lease land; just a reminder for all you adventurers out there that you should never enter lease land without the leasees permission. 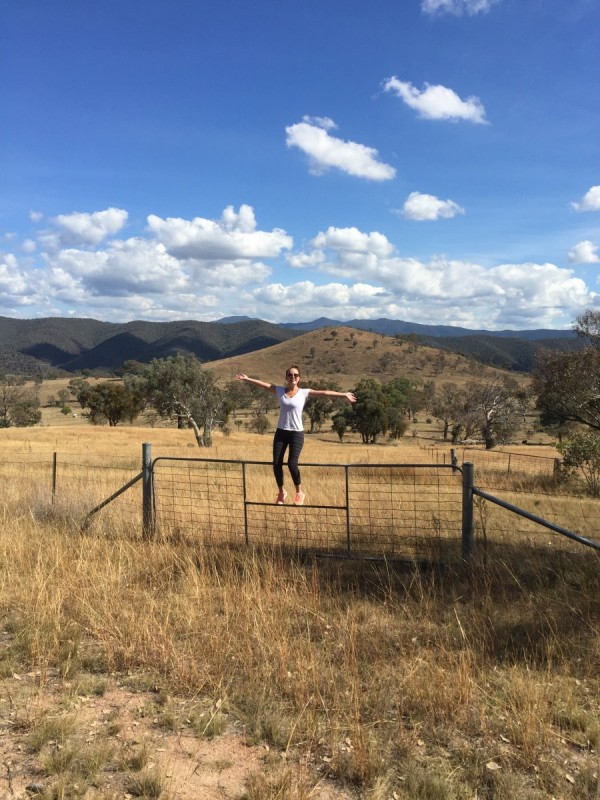 As the houses of Gleneagles come into view, the track leads around to the left along the base of the hill. There are also good views of Murrumbidgee Country Club and golf course. And now the fun begins. 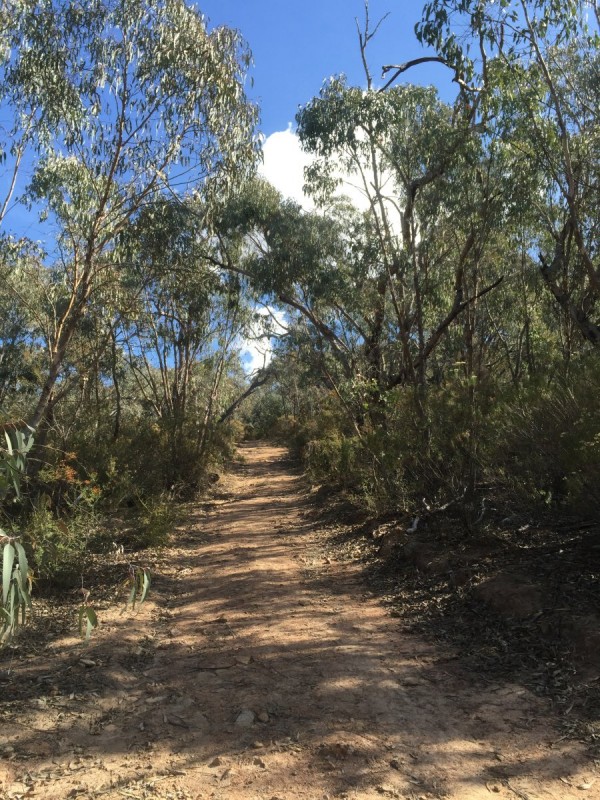 The track takes a sharp left followed by a sharp incline. I have to be honest, after the lovely, casual stroll so far I had almost forgotten about the hill part. And it was tough going, very steep with loose gravel and rocks. A combo that requires a lot of concentration and a lot of deep breathing. There were definitely a few moments when I needed to stop and catch my breath. Luckily my adventure buddy is not writing his version of events as he might mention the part where I needed to sit down in the middle of the track for fear of my legs collapsing and rolling back down the hill.

But, as always, the hard work was worth it. The view from the top was simply stunning. And, as McQuoids Hill is actually made up of two peaks of a similar height, you get twice the enjoyment. There were wonderful views across Tuggeranong Valley as well as towards the city to Lake Burley Griffin. You may spot in the photo below some smoke around Mt Arawang. Concerned at the time, I later confirmed that it was controlled back-burning.

After a good rest we headed back down the hill following the track on the opposite side of mountain to the way we came up. This track was short and sweet and rejoined the main track back near the horse paddocks. In the hour or so since we passed the paddock earlier in the morning, many more horses had gathered and they seemed very happy, some basking in the sunshine, others enjoying the shade of a lovely old gum tree.

We exited back on to Allchin Street. Another one of Canberra’s less-known hills conquered.

How to get there
We started from Heke Street in Kambah. However, if you prefer not to park on the street (or have a handy house nearby) then I would recommend parking in the paved area on Allchin Court near the entrance to the Neighbour Horse Holding Paddocks.

One Response to Take a hike: McQuoids Hill
Filter
Showing only Website comments

I was upset when I reached the top of McQuoids Hill that there is no trig point there. I knew I was at the highest point when I looked at the other peak and it was lower, but without a trig it didn’t seem official.

bj_ACT - 12 hours ago
Yes razor it’s a good point. Agree there are pockets of Tuggeranong and Belconnen that could do with some ACT government do... View
mattm - 13 hours ago
There are almost 130 Councils in NSW, and most of them do a much better job with municipal services than the ACT Government.... View
Heavs - 14 hours ago
Competent councils - like this one? https://www.canberratimes.com.au/story/6978805/nsw-central-coast-council-to-be-sacked/ Or... View
Community 1

A former employee of a Canberra furniture store has been awarded millions of dollars after unsafe working conditions resulted in...
News 12