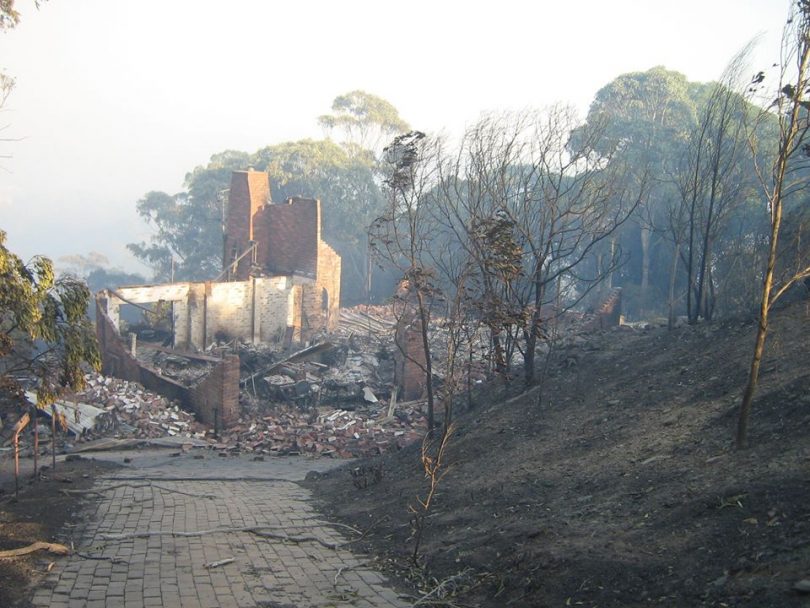 As the sun was setting behind the hills to the west of Bega the people of Tathra lined up to find out the fate of their homes.

Tonight’s briefing from the Rural Fire Service followed a day of assessments within the devastated community of 1,700 people.

“Access to the fire ground will not be available until Wednesday afternoon at the very earliest,” Matthew Reeves from the Rural Fire Service told the 300 people gathered in the Bega Showground Pavilion tonight.

Fears around asbestos contamination are one of the key concerns to be addressed before people are allowed in.

“We need to consider the long term. Your safety, ongoing health, wellbeing, and ability to recover from this disaster is important to us,” Mr Reeves says.

Depending on the level of contamination found, areas of Tathra will start to be opened up to residents over the coming days.

“Some of you might be in the situation where friends or family can return to where they live but you are not able to because we are still going through the process of determining significant hazards like asbestos.”

The next step in tonight’s meeting was the hardest, as people queued to find out if Sunday’s flames had destroyed or damaged their home. 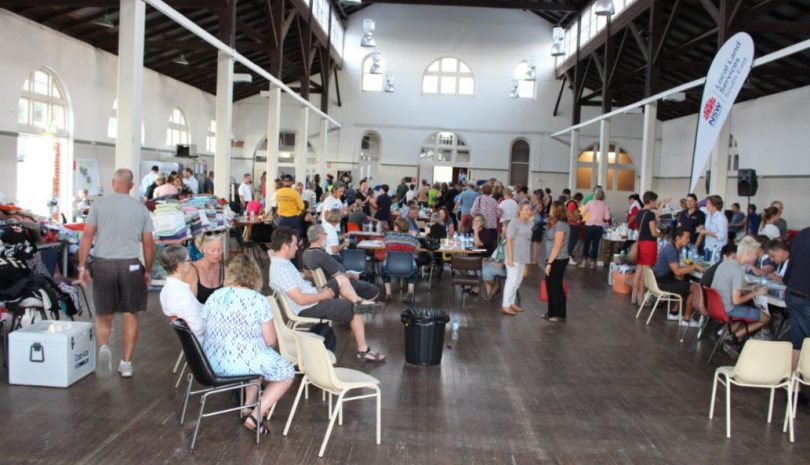 People lined up tonight at the Bega Showground to discover the fate of their home. Photo: Ian Campbell.

Ninety percent of the impacted area has been surveyed by the NSW RFS Building Impact Assessment team.

That clarity was front of mind for everyone today, with Tathra locals wrestling with well-intended but conflicting unofficial news of their property.

For those with damaged and destroyed homes, a revolving shuttle service will operate between the Bega Showground and Tathra tomorrow (March 20) between 10am and 2pm.

“You can visit your street, your neighbourhood, to see for yourself the situation,” Mr Reeves says.

“We are asking you as a community to naturally give priority to people who do find out their home has been destroyed or damaged.

“There’s nothing like looking at it with your own two eyes, so this bus will run for a couple of days if it needs to, as long as it takes to get you through and help you with that process of knowing what’s going on,” he says.

People, however, won’t be able to get off the bus just yet because the risks that remain. 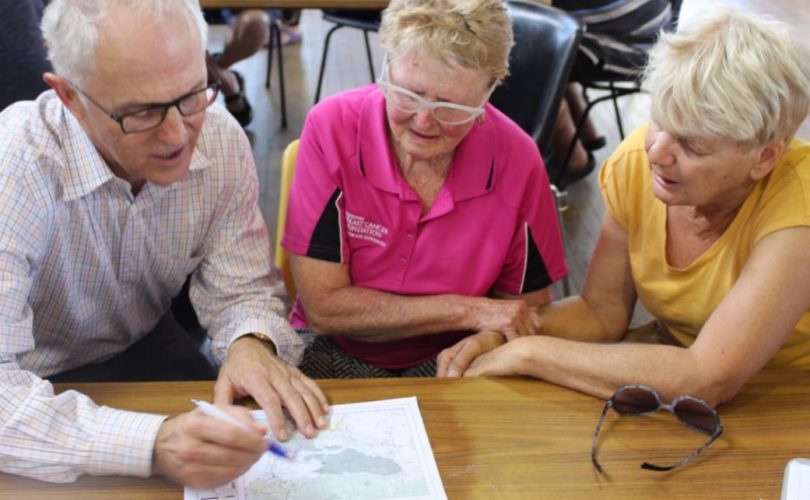 Incident Controller, Superintendent Mark Williams felt the emotion in the room as he spoke tonight.

“This is a difficult time, it’s heartening to see this community pull together in the spirit that it has,” he says.

“I can report the fire is still within containment lines.

“Today’s weather has allowed our crews to undertake some active backburning and get a containment line around the fire.”

Given the favourable conditions, Mr Williams believes containment of the fire is feasible by Wednesday morning.

“The firefighting is not over on this job, we are going to capitalise on the good weather conditions over the next few days, but we still have to put it to bed.”

Reflecting on the 398 properties saved, Mr Williams paid tribute to the work of firefighters and local residents.

“That is a result to you guys as a community, in your preparedness for this event. There’s a lot of properties that I’ve inspected that had been well protected, self-help is the best defence and I congratulate you on that.”

A further briefing from the Rural Fire Service will be held at 10am tomorrow (March 20) at Bega Showground especially for people unable to be there tonight.

As the hump of day two approached mid-afternoon, NSW Premier Gladys Berejiklian and Prime Minister Malcolm Turnbull toured Bega Showground which served to lift the energy of escapees from Tathra and Kalaru and the many volunteers and staff working.

“We’ve appointed a coordinator, Mr Ewan Ferguson, he’s had 40 years experience in disaster recovery, he arrives here this afternoon, he’s got great experience in converting evacuation centres into recourse centres where people can drop in and get all the information they need,” the Premier says.

Prime Minister Malcolm Turnbull made his way around the room followed by a hefty media pack.

“Everyone is in one piece which is a great thing,” he says.

“I just want to thank all the volunteers, all the emergency service workers, the Rural Fire Service, but above all, I want to thank you the community here in Tathra and Bega for pulling together and providing all this love and support.”

As night falls the words Matthew Reeves from the Rural Fire Service ring loudly in my ears, “Tonight is when your community is really going to need you, so we encourage you to work together to get through this but to also utilise the professional services that are available to assist you through this.”

Note that people couldn’t get alerts because “mobile phone towers were knocked out”. Now the NBN is taking away all our landlines, which, of course, operate independently of the electricity supply. That is a very unfortunate byproduct of the NBN.

There will be a big review around comms in and around Tathra Lucy and whats needed. Cheers Ian

Roderick Saunders - 9 minutes ago
Mitch McClintock that's right, it's a raised wagon View
Paul Leins - 52 minutes ago
AJ Jay some savage gravel drive ways out there View
AJ Jay - 2 hours ago
Paul Leins but but you may have to go over a gutter in the carpark...or park on a green verge...totes justified then.🤣 View
Community 24

Ann-Maree Jacobs - 29 minutes ago
Four tries every time The site is down ! View
Lisa Hogan - 10 hours ago
Agreed. The current scheme only benefits those with the disposable income to buy stuff. So another 'discount' for the rich. A... View
News 7

jwinston - 31 minutes ago
Jeez Chewy - I never picked you as a Tim Flannery fan boy? View
Capital Retro - 41 minutes ago
Nothing new in that advertorial but it's great to see one side bagging the hydrogen lobby. Our virtual signalling government... View
chewy14 - 2 hours ago
JWinston, Most people probably didn't respond because the "documentary" you reference was full of outdated, inaccurate inform... View
News 83

Concerns about the wait time for a simple surgery to remove her son's tonsils, adenoids and grommets has led to...
Best of Canberra 198

When did the word 'consultation' become the beginning and end of a genuine voice from the community on major policy...
Motoring 27

@The_RiotACT @The_RiotACT
Opposition Leader Elizabeth Lee said she has received "a huge amount of interest" for her stealthing bill, which she says is a positive first step to raising awareness about "the existence of such a heinous practice" https://t.co/YQDtFOWLYU (43 minutes ago)