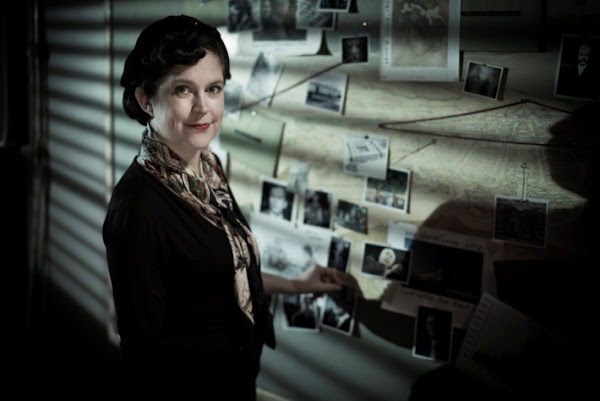 The ABC want you to know they’re having a look at the darker side of Canberra:

CANBERRA CONFIDENTIAL – A CENTURY OF LIES, SPIES AND SCANDALS WITH ANNABEL CRABB

Nothing much happens in Canberra, never has. That’s what most people think. ABC presenter Annabel Crabb is set to change your mind in Canberra Confidential, a revealing and whimsical rummage through a century of secrets in our nation’s capital. It’s the history Canberra has tried to hide. While Canberra celebrates its centenary in March, there’s no better time to lay bare its past scandals and secrets.

Annabel dishes the dirt on a series of almost forgotten scandals, spectacular political skulduggery and espionage sagas that rocked the nation. Along the way, she meets with players, prime ministers, reporters and the victims of some of the nation’s greatest scandals. There’s even a memorable encounter with Australia’s spy master-in-chief, ASIO boss David Irvine.

Among the surprising gems is the mystery of “Rosie’s Suitcase”, the murky insides of which throw light on the after-hours temptations for our 1930’s federal politicians. The X-rated contents are a blackmailer’s dream…and maybe that’s exactly what was intended. Annabel concludes the written confessions of Rosie and Joan’s liaisons may well have been part of the nation’s first political dirt file.

Another coup is David Combe, who breaks a 30-year silence about the events of 1983 when, after a successful career as the ALP’s Federal Secretary, he was dragged into a spy scandal that sent the newly elected Hawke Government into a spin. Over a Russian salad, he tells Annabel about his friendship with Valery Ivanov, his mate from the Soviet Embassy, and the drunken conversations between them that ASIO was secretly taping.

Bob Hawke’s ruthless actions to quarantine the government against the political fallout of the Combe/Ivanov affair ruined the career of one of Labor’s favourite sons and led to the expulsion of the alleged Soviet spymaster Ivanov. “There was a lot of soft, clammy nonsense about being nice to David,” a steely Hawke tells Annabel. “I thought it was rather better to be nice to the party and save the Government.” Three decades on, there’s no love lost. “Bob’s a pretty narcissistic fellow,” says Combe. “I was expendable and therefore had to be expended”.

She meets Canberra’s exotic “scarlet woman” of the mid 70s, Junie Morosi. And finds out, from “Deep Throat” and journalist Philip Dorling, what it’s like to have your house raided by government security agents – twice!

Hope they have the one about the middle east finance broker, the high speed chase with a ComCar through Canberra and the shoe buff room. Damn people think the current government is messed up, they should have tried living with Whitlam.

Good to see Annabel doing more projects like this, I really enjoyed her work on Kitchen Cabinet – a nice balance of political yarns, cooking and personal insights from the key players.

Love the period look she’s got going on in the promo shot as well!

Bronwyn Tolley - 2 hours ago
Karin Hagel Prince Phillip at Buckingham Palace, July 20th 1969. The day man landed on the moon ! View
Tig Beswick - 4 hours ago
Robyn Lynette Pierce - when I was a little girl, I went to the NSW Governor General’s house because my dad had been invited... View
Karin Hagel - 5 hours ago
Kylie Chance - if you read the article they say he has info on where to find a Hemsworth. Jugiong isn't far away... could sti... View
Business 36

Conor McNamara - 5 hours ago
Michael Wittman Ironic, coming from a wannabe SS. View
Aaron Still - 6 hours ago
Rob Thomas clever way of putting it 👍 View
Gem Gemm - 9 hours ago
I am so utterly dumbfounded that people are upset over this? Like water is wet. It's absolutely a micro aggression and subtle... View
Opinion 9

Áine Ní Tighearnaigh - 6 hours ago
Its good to draw attention to the poor maintenance practices of big bureaucratic systems running housing. I can provide accur... View
What's On 9

Louise Saber - 6 hours ago
Meg McLoughlin next time you are heading to Willinga Park let me know! View
Opinion 66

Shaun Cummins - 8 hours ago
Even a bee is noisy! View
lakefly - 10 hours ago
Rather than expansion, it should be shut down. These drones are not quiet at all. What real benefit do they really bring. Why... View
Daniel Oyston - 10 hours ago
Cue outrage ... View
News 2

Not The Mama - 9 hours ago
Why not knock it down and build two parliament houses on the site instead? :-P... View
Property 7

retep - 10 hours ago
With concrete a substantial source of environmental warming gases I would think the ACT government would be all over this. No... View
chewy14 - 10 hours ago
BJ, The developers build what the market tells them too. If there wasn't a demand for the units they are making, they wouldn'... View
News 8

Peter Marshall - 11 hours ago
Since just before the 2019 NSW election. View
show more show less
*Results are based on activity within last 7 days

@The_RiotACT @The_RiotACT
Have you ever thought about getting involved in the fast-growing sport of trail running? The Stromlo Running Festival may be your perfect entry point https://t.co/CIff9vxQuN (7 hours ago)

@The_RiotACT @The_RiotACT
Fancy making the most of the beautiful autumn days here in the capital? There's plenty happening - so get out and about! https://t.co/GuOk85t9aP (8 hours ago)

@The_RiotACT @The_RiotACT
As Canberra's demand for housing continues to grow, are there too many new apartments on the horizon? One expert says no https://t.co/wOvLEBTlHx (11 hours ago)