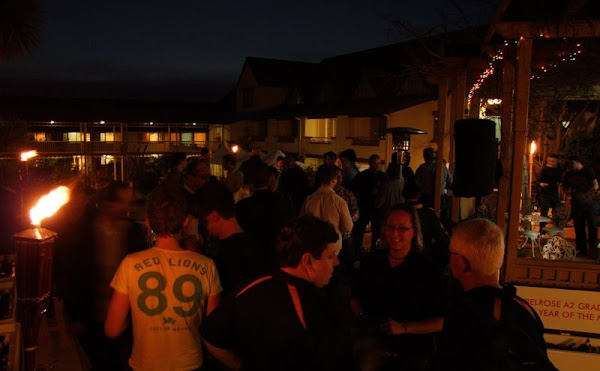 The Canberra Times is having a look at the latest name change for the Ainslie Hotel which is is going from being “Olims Hotel” to “Mercure Canberra”.

The Schwartz Family Company, which owns the hotel, said the rebranding was designed to make the hotel more appealing to a global network.

”Canberra is going through an exceptional growth phase and is opening itself to the rest of the world as a real tourist destination …,” director Jerry Schwartz said.

”By renaming the hotel, it should bring with it international marketing, much in tune with Canberra Airport.”

He added that the company had spent more than $8 million refurbishing the historic building over the past three years.

It might be easier for locals to just refer to “The Ainslie Hotel” rather than worrying what corporate flag is currently flying from the mast?

[Photo from the 2008 Craft Beer Festival in the hotel courtyard]

And what was the weekly wage?

I can see why the business owners are renaming the hotel, but the idea that Canberra Airport is something to keep up with strikes me as a little sad. I always thought that Olims sounded like a pissed Norse God.

Well you probably do pre-date me, my drinking there dates from the early seventies, but the name Ainslie Rex was the “offical name from the sixties through 1989, and to this day I think if it by that name.

I don’t think I’ve ever heard anyone call it The Ainslie Hotel. It has always just been Olims to me, and it will probably remian that way.
.

Well it all depends on when you started drinking there. It was originally called Hotel Ainslie and then Spendlove’s Hotel, and then it was the Ainslie Rex from before I was born. It only changed to Olim’s recently (1989).

I don’t think I’ve ever heard anyone call it The Ainslie Hotel. It has always just been Olims to me, and it will probably remian that way.

It isn’t even in Ainslie.

Neither is Ainslie Primary, Ainslie historically is a bigger area than today IIRC. It’s also on Ainslie Avenue FWIW.

Can’t beat it on ANZAC Day. Packed to the rafters.

It might be easier for locals to just refer to “The Ainslie Hotel” rather than worrying what corporate flag is currently flying from the mast?

I would think the hotel is probably more concerned about its reputation and brand visibility among non-locals, seeing as how they’re the people most likely to be needing the services of a hotel.

JS9 - 2 hours ago
"You also complain that Coe has promised to give away lots of revenue and spend plenty too, but with no evidence as to how he... View
George Watling - 5 hours ago
Yes lets have more $1.9 billion spends on Trams and bad urban infill stuffing up the city. View
HiddenDragon - 5 hours ago
"Labor, coming from the advantage of incumbency, says its promises are fully funded but with debt approaching $8 billion in f... View
ACT Election 98