The Bradley report is out. UC and CIT merger. 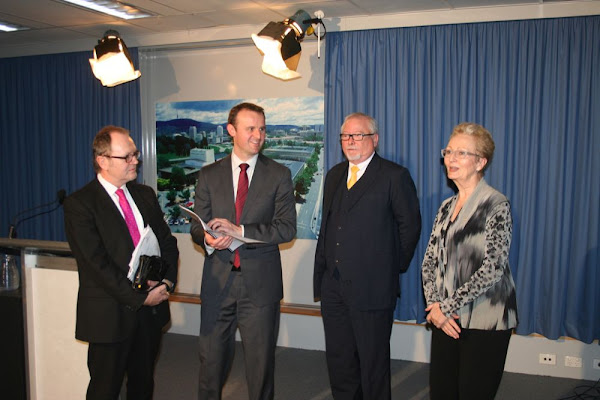 Andrew Barr has announced the release of the Bradley Report into merging the University of Canberra and CIT.

Professor Bradley also recommends that if the ACT Government elects not to establish a new institution, it provides the CIT with greater independence.

Professor Bradley recommends that the new institution commence operations on 1 January 2012. The establishment of a new institution or greater autonomy for CIT would require legislative changes that would need to be considered by the ACT Legislative Assembly.

The Education and Training Directorate is calling for public feedback on the report. The consultation closes on 23 September.

The final recommendation won’t go to Government until November which doesn’t leave a lot of time to make some big changes.

“I agree with Professor Bradley that a new dual sector university for Canberra represents a great opportunity for our city. This innovation would mean more jobs in teaching, more jobs in research, a more skilled workforce for the capital and more students from a wider range of backgrounds benefiting from a quality education with linked pathways and opportunities. Examples abound, in health, construction, design and technology, where by bringing our current offerings together we can create new ones and meet the needs of employers.

“Speaking at the University of Canberra last year Andrew Barr outlined a vision for Canberra where more people work in education and research than in the public sector. Professor Bradley’s recommendations could help realise that vision.

“Education’s external earnings already make the largest contribution to the ACT economy of any industry outside government services. This contribution will grow further under a new vision of Canberra as an education city as we approach the Centenary year.

“My governing body, the UC Council, considered the Hawke Report in March and in April. It endorsed the idea of merger on the basis of certain principles, most of which Denise Bradley has now affirmed, in particular parity of esteem between the two current institutions and the avoidance of compulsory job losses due to the merger. I do not predict a change in position on these issues.

3 Responses to The Bradley report is out. UC and CIT merger.
Filter
Showing only Website comments

… The downside is, of course, that people have been able to complete half their degree at CIT sans HECS and then transfer with a couple of years’ exemption. I expect this is just a way to kybosh that saving.

VET FEE HELP is available to cover either in part or full depending on eligibility the costs of VET programs.

I’m, not entirely sold on the merger, I fear that vocational programs and industry engagement will be the biggest losers as the new entity and staff slide into the mindset of academia and lose touch with the real world.

Great idea. UC has never been a university in any case. UC standards are abysmal in some of the schools. Last year I did some work with ANU undergraduates who were FAR more advanced than the “equivalent” course at UC at Masters level. The downside is, of course, that people have been able to complete half their degree at CIT sans HECS and then transfer with a couple of years’ exemption. I expect this is just a way to kybosh that saving.

Something needs to happen. In my opinion it is untenable for institutions such as UC and CIT to continue creating position after position of senior management while asking teaching staff, admin staff and students to do more with less. How many tiers of executive and management staff does Canberra need for it’s TAFE?

George Watling - 3 hours ago
These multi title trojan horses are cropping up all over Canberra. Developers are trying it on in Holder and Weston and other... View
News 45

Shane Westmore - 3 hours ago
Absolutely. There’s people voting now who are completely misinformed about anything going on in this country & waste their... View
Nada Krstin - 5 hours ago
oops, meant to say, cannot have it one way! :)... View
Nada Krstin - 5 hours ago
No. And if you think they are mature enough to vote at 16 or 17, then they should be tried for any crimes as adults as well,... View
Opinion 94

Linda Stapleton - 11 hours ago
Just look at the size of that Rhubarb...wow View
show more show less
*Results are based on activity within last 7 days

@The_RiotACT @The_RiotACT
Amelia Bidgood ventures off the beaten track to @yarrhwines to try their seasonal Winemaker's Sail ... and can't help but pick up a bottle of their stunning sangiovese https://t.co/vfesq5BVzv (8 hours ago)

@The_RiotACT @The_RiotACT
There’s something about that 1940s charm that wins you over every time. This home at 7 McCaughey Street in #Turner is no exception https://t.co/iTSEzUMGL9 (9 hours ago)