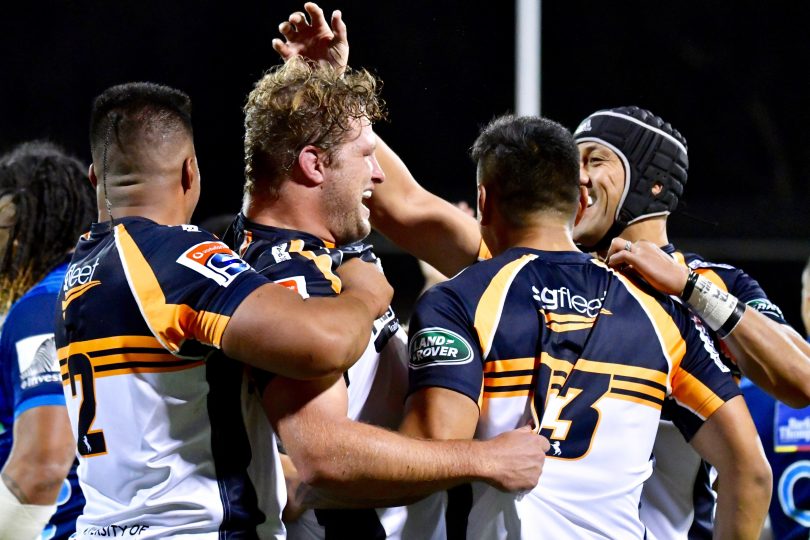 The Brumbies are back in Canberra and have hit the ground running to prepare for round one at the end of January. Photo: File.

The Brumbies have returned to Canberra after a 10-day training camp in Newcastle, ready for their first trial match in Albury on Thursday (23 January).

The team left the capital due to the hazardous air levels related to the bushfires. Brumbies coach Dan McKellar says it’s good to be back home.

“We slept well last night I think, I know the coaches did anyway. It has been a good nine or 10 days up in Newcastle but it is nice to get back to Canberra and get stuck in and continue to prepare for the [start of the season],” he said.

“We always planned to have a camp, but I think the boys were excited to get back to Canberra and back to headquarters and to see family and friends.”

McKellar says they are looking to make an impact at the start of the season despite the disruptions and shorter preparation time.

“We are pretty comfortable and confident with where we are at. We are making sure we get through the work we need to get through,” he said.

“We are not going to be perfect in round one, but you’re not in any year. We just need to make sure we prioritise some areas and build and get better as the weeks go by.

“We are backing the young guys because they are ready to go, and they will be ready to go on the 31st [in round one against the Queensland Reds]. We are comfortable and confident that will be the case.”

Lock and Flanker Murray Douglas said the last 10 days have really helped the team bond after some new faces joined the squad.

“This year saw a lot of new faces coming in, and it is really beneficial to get that quality time away to get to know guys a lot better,” he said.

“It has been a shorter pre-season this year so we did not really think we were going to have the luxury of an extended camp.”

After working on their set-piece attacks and defensive systems, Douglas says the team is keen to hit the park at the end of January.

“We have some young guys that are really confident and keen to get out there and hopefully we can start well.”